An Afternoon on Denver’s Fastracks 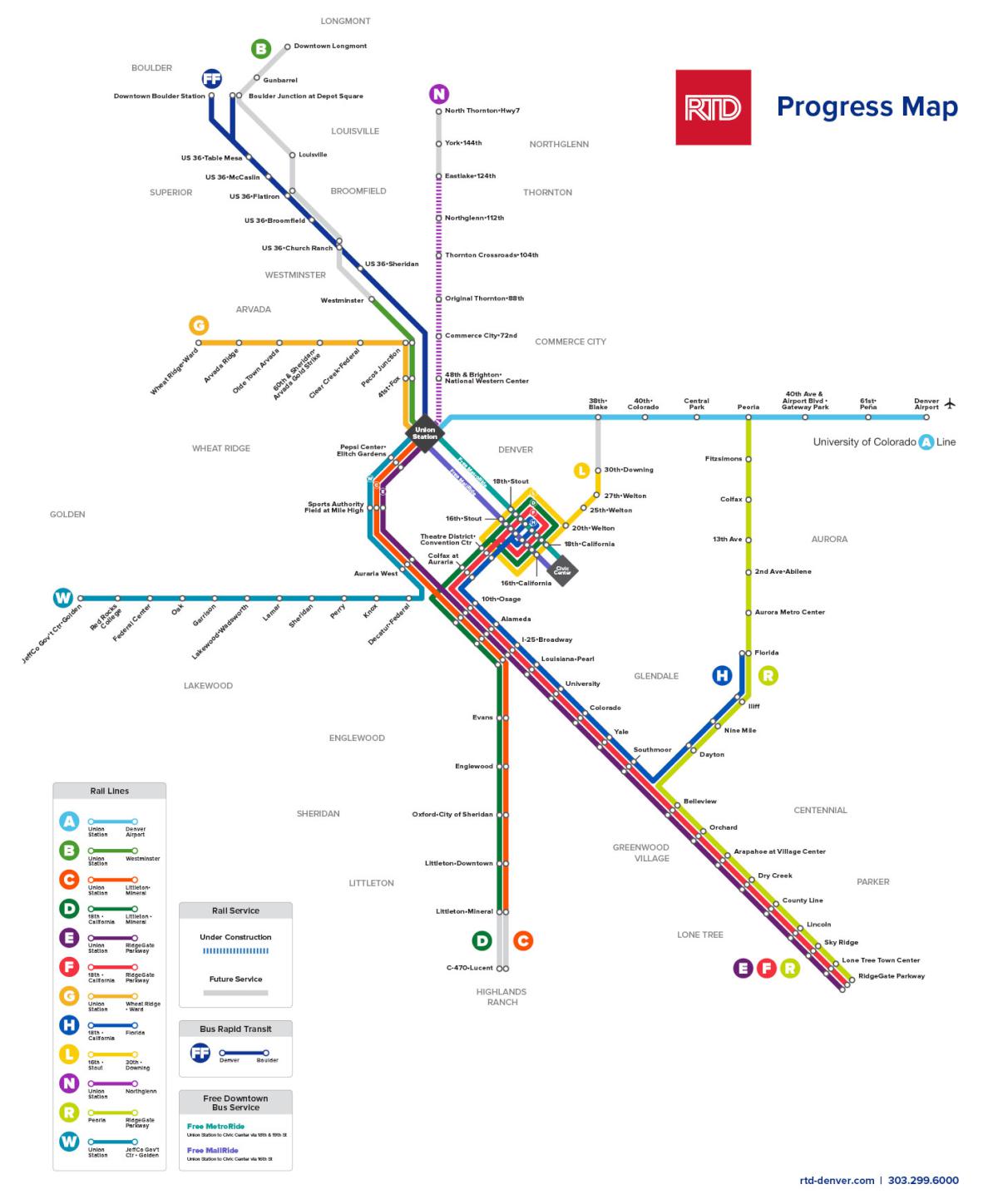 Denver has fooled around with contemporary rail transit since 1994. The metro area got serious about it in 2004, when voters in the eight-county Regional Transportation District approved an 0.4% sales tax increase to fund a transit expansion with commuter rail, light rail, and express bus service called Fastracks. Various rail lines were built, including commuter rail service to Denver International Airport in 2016. After a two-and-a-half year delay involving positive train control software for at-grade crossings, commuter rail service to my west Denver suburb finally started in late April this year. I have said for some years that once service to my suburb began, I would take time to ride the rail system everywhere that it went. This past week I started that project.

For my first outing I rode three different routes: my suburb to the Union Station hub and (eventually) back, Union Station to DIA and back, then Union Station to the University of Denver and back. RTD’s Android app for buying passes on a smart phone or tablet is straightforward to install and use. The only place I saw people buying tickets from one of the vending machines was at the airport. I got a regional day pass good for everywhere RTD goes by rail or bus. Because I’m officially an oldster now the price was $5.25; for people who don’t qualify for any of the discounts, $10.50. The pass was good from the time I activated it until the following 2:59 am. My pass was checked once, on the very first leg of the trip. That seems like a sloppy way to run a railroad. OTOH, the one person who did check my pass was a transit police officer with a gun. 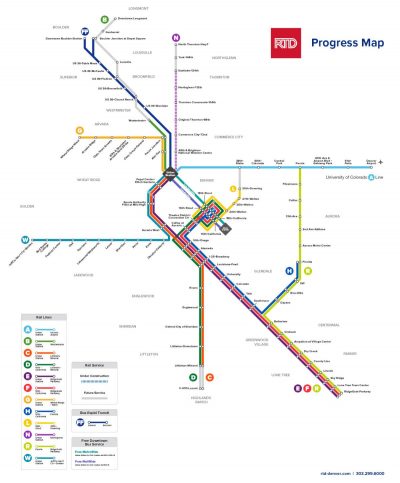 Navigation was easy. All the stations include the sort of stylized route map all rail systems seem to use a complete schedule for all the trains serving that location. Almost all of the stations have overhead signs that show how long until the next train arrives. The times were accurate. In this day and age, there’s no acceptable reason they shouldn’t be accurate. The longest I had to wait for anything was 15 minutes. Other than that, all waits were under ten minutes. Except for the commuter rail terminal at Union Station, crossing from one side of a station to the other side to change trains or directions uses track-level crosswalks. I’m not sure if I should have been surprised by that or not. All of the live electrical wires are high overhead, so it’s not like crossing the subway tracks in New York City with a 600 VDC third rail.

As usual when riding transit, wear walking shoes. Also dress appropriately for the weather, because at some point you will be exposed briefly – or perhaps longer – to the elements. This is Denver and it’s summer so people in shorts outnumbered people in long pants. The best-dressed people I saw all day were the two young women who looked like they were dressed for court zipping by Union Station on electric scooters. The first long walk I had was from the station at DIA into the Great Hall in the main terminal. The other long walk was from the commuter rail terminal immediately next to Union Station to the terminal for the light rail routes about 300 yards away. In the case of particularly bad weather, most of that walk can also be done underground through the big new bus terminal. I could have avoided most of the commuter-to-light-rail walk by riding the free 16th Street Mall shuttle. That option wasn’t clearly indicated.

Union Station was quite nice and very crowded. Some of the reason for the crowd was probably that it was the middle of lunch hour on a Friday. DIA was crowded and not nice. Half of the Great Hall there is torn up for renovation, a condition that will last at least the next three years. The trains and stations were all clean. Some of the trains run through rather scruffy areas, but those probably aren’t going to last. Development is springing up near all of the train stations. With a few exceptions way out by the airport, all of the new housing I saw was reasonably high density: townhouses, condos, and apartments. The buildings closer to downtown are taller.

One of the common questions people ask is, “Yeah, but how long does it take to get to the airport?” My estimate for the airport trip from my house, driveway to check-in line, including waiting for the train twice, is 90 minutes and $5.25. Lyft’s online planner says about 50 minutes and $35 for a shared ride. Every time a train I was on was close enough to one of the interstates for me to see, traffic was slow, so that 50-minute estimate may be a little on the low side. Now imagine adding a bit of snow…

At the end of the day, though, it’s just rail transit. There’s nothing special about it except that it’s in Denver. It goes to some of the places I’m interested in going but not to others. There’s a pronounced “last mile” problem at many destinations. Not the ones I went to on this particular rideabout; free shuttles take care of downtown, the train station is right at the edge of the university campus, and I’ve walked farther from parking at DIA. OTOH, the distance from the train station to any particular location in the Denver Tech Center and its tens of thousands of jobs is likely to be long and require walking along one or more roads that aren’t pedestrian friendly.

Fastracks isn’t going to pull huge numbers of people out of their cars. Anyone who is honest knows that it wasn’t ever intended to. I’ve lived in the Denver metro area for 31 years now and the population has increased by more than a million people in that period. For the entire time, the interstates and other freeways have managed to keep from becoming entirely unusable at rush hour, but barely. That has been accomplished by squeezing in more lanes, rebuilding interchanges to make them more efficient, and building parts of an outer ring highway. There’s not much more that can be done to increase the road capacity. But if the rail system pulls 150,000 trips off the highways each day, it will be doing its job to keep things out of that “unusable” state everyone fears.