Amy, I Think I Could Stay With You 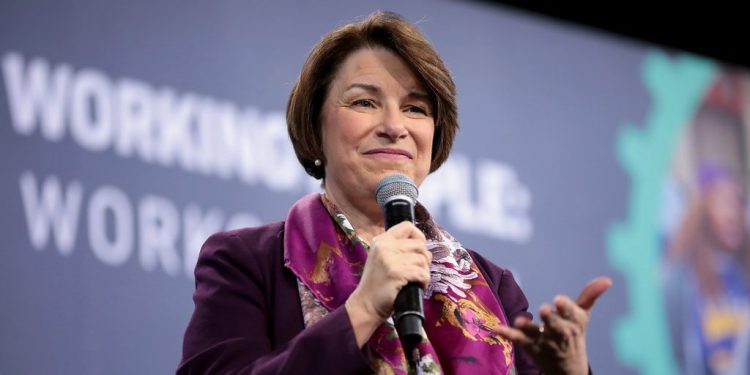 Amy Klobuchar will be an also-ran. You know it, I know it, and it’s likely she knows it. And that’s a real shame, because I believe Amy is someone who could lead this country.

She lacks the presence and poise of Kamala Harris, the highbrow intellectualism of Elizabeth Warren, or the cult fan club of Marianne Williamson. In fact, the only female candidate she obviously outshines is poor Kirsten Gillibrand, the wallpaper of 2020’s hopefuls.

But she has grit, determination, and sensibility.

Born and raised in Minnesota, Amy is the daughter of a newspaper columnist and an elementary school teacher. She was high school valedictorian, got her undergrad degree from Yale, and her law degree from the University of Chicago. She practiced corporate law then served as a county prosecutor for 8 years before winning her senate seat, which she has held since 2007. As she noted at July 30th’s Democratic debate, she easily won even those Minnesota districts that went to Trump in 2016.

As senator, she has a reputation for bipartisan negotiation. At the end of the 114th Congress in 2016, Amy had passed more legislation than any other senator, having her name on 27 successful bills. But her first real national notice came during her participation in the Kavanaugh hearings last fall. In proceedings in which political darlings Cory Booker and Kamala Harris vied for the soundbite spotlight, Amy was composed, dignified, professional and effective in her questioning. Kavanaugh himself expressed his respect for the senator, and later apologized for a flippant retort in which he asked Amy, the daughter of an alcoholic, whether she’d ever drank until she blacked out. She was, as the saying goes, the adult in the room.

But Amy is not without detractors, despite her solid competence and pragmatism. Subsequent to her announcement of her candidacy, stories came out about her difficult temper, and alleged abuse of her staff. She was accused of throwing a three-ring binder which hit a bystander, berating staffers, and demanding their assistance with personal errands. And then there was the infamous salad comb incident. For her part, Amy didn’t deny the reports:

Compared to her ambitiously progressive counterparts, Amy is pragmatic. Having voted in line with President Trump over 30% of the time, she is a moderate, somewhere to the left of Kyrsten Sinema and the right of Elizabeth Warren. Her top issue is not a utopian healthcare system or drastic environmental policy; it’s infrastructure, for which she unveiled a trillion-dollar plan in March. She ticks several boxes for the more mainstream policy positions such as gun control (she favors universal background checks and a ban on “assault” weapons), raising teacher pay, and protection for DACA and TPS recipients. She advocates emphasizing “workforce readiness” as an alternative to college for high school students. She wants to tackle mental health and substance abuse treatment, in part with an additional one-cent per milligram tax on opioids. Amy’s focus on sensible changes rather than sweeping reforms earned her the derisive nickname “the Senator of small things.”

Maybe that focus on small things is the way to go. Clearly, this country is not collectively in the mood for grand overhauls of our institutions, however fouled up they are. If she could get the attention of the masses who bristle at the newest incarnation of the “radical left” but are nonetheless unhappy with the opposing direction of political wind, they may find her a refreshing ally.

What she lacks in bells and whistles, Amy makes up for with intelligence, toughness, and practicality. Unfortunately, she has not found a way to stand out and her time in the race may be coming to an end, based on her dismal performance in the polls. But until then, I’ll stay with Amy. For a while, maybe longer.