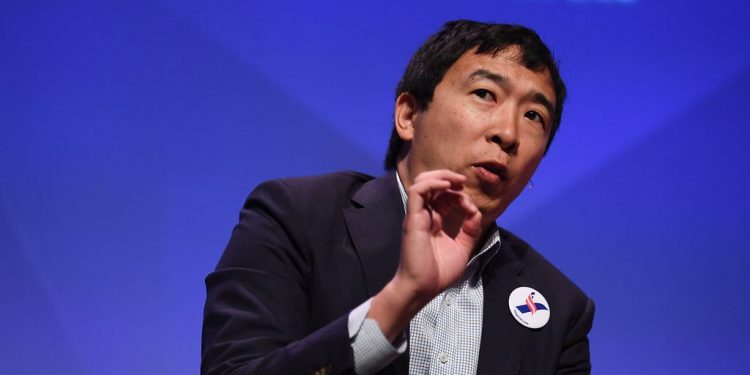 The UBI isn’t going to work. And by “it isn’t going to work”, I don’t mean that “the majority of people in the country wouldn’t have their lives improved by an extra $1000 in their bank accounts every month” but I mean that “congress would never, in a million years, write legislation doing this and, even if they did, the Senate wouldn’t send it up to the executive to sign it”.

It’d never get off the ground. But you know what? Andrew Yang knows that there are a lot of problems out there that could be solved with nothing more than a little bit of money. As such, this tells me that even if his solution wouldn’t make it through the snake that is Washington DC, he at least sees the world with startlingly clear eyes.

People who work in poverty organizations have said to me: “The best thing we could do is to simply give the people we serve more money.” They are often among the most excited about my campaign. 👍

If you want to get all wonky about the various problems with the Hashtag Freedom Dividend, you could spend a couple of hours coming up with them. Would we give it to everybody? Even illegal immigrants? Does it go to babies? Wouldn’t it go to landlords’ pockets instead of various stores around town? Hey, I already said that it would never get out of committee. But he sees a number of problems coming up. Fewer and fewer people who don’t have a whole lot of skills will be needed less and less by the corporations that will be hiring people to maintain and repair the robots and touchscreens that will be replacing the people who used to be required. (Those robots and touchscreens put in a lot less to the tax coffers as well despite being able to work 24/7.)

He sees that problem coming down the pike and has said that we need to come up with a solution for it. The Hashtag Freedom Dividend is his solution. Sure, it won’t get off the ground… but he sees the problem in the first place.

Another solution he has embraced: Getting Occupational Licensing recognized across state lines. He wants to make it so that if you get an occupational license in any given state, it’s automatically transferrable to any other state you’d be inclined to move to. If you are stuck in a low-income state, get a license that will make you money in a high-income state and move and be able to get a job. (Heck, he even endorses a tax credit for moving expenses.)

While I’m sure that a lot of the laws about occupational licensing have been captured by the various shareholders in the states that don’t think that a plumbing license from Maine should be allowed to let the plumber plumb in Michigan (or vice-versa), the fact that Yang sees that forcing a skilled worker to stay in his or her licensing state is causing harm to multiple people and multiple states shows that he’s seeing the problem in the first place.

Heck, just look at his policies page. Sure, he’s got “legalize pot” and “get rid of the Daylight Saving Time switch” on there, but he’s also got Zoning on there. He sees that Zoning is one of the biggest problems when it comes to affordable housing today. He sees it. He knows that every cop should be carrying a camera. And, most importantly, for every single one of his policies, he comes out and says “this is the problem that needs to be solved and here is why my policy will solve it”.

He comes out and says that he sees the problem. Sure, there’s a lot of little goofy things on the list… get rid of the penny? Lower the voting age to 16? But he also has some serious jaw-droppers on there. He notices that Harvard should be accepting a lot more students. Holy cow. Of course it should. He wants to automatically sunset old laws. Holy cow. Of course we should do that.

He’s not just mouthing boiler-plate platitudes, but he’s looking at the future and trying to prepare for it, rather than just trying to skate on what used to work and the old ways of thinking. He sees the problems and how they’re all intertwined with each other. The other candidates are just fighting the last war. Andrew Yang wants to prevent the next one.

Also, I can’t help but include this piece of evidence that he sees things clearly (warning: strong language):

You can donate to Andrew Yang here. Just scroll down and hit the donate button. You can follow him on twitter here. And if you’re inclined to volunteer, you can get involved with that by going here.

Please check him out. The future is going to get here, one way or another. We should have a president who sees it coming.