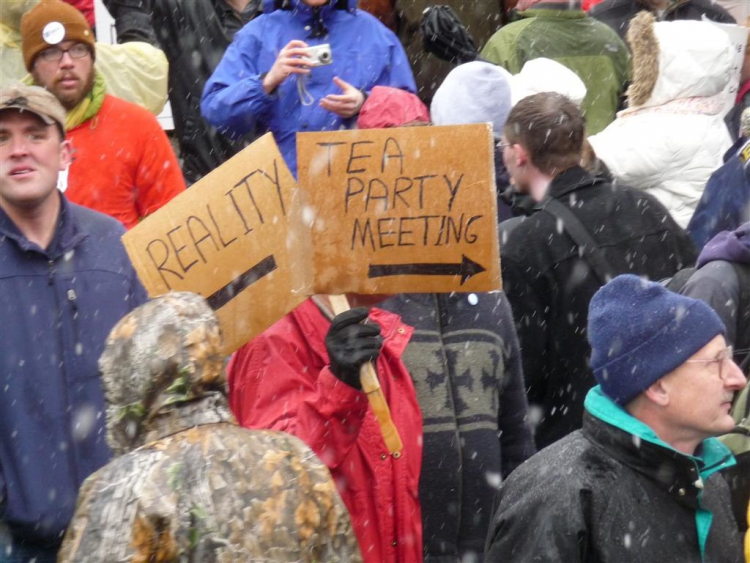 Photo by WisPolitics.com via Wikimedia Commons

Assuming it passes, the White House and Congress have agreed on a budget deal that pushes the next round of debt ceiling drama into 2021, safely past the looming 2020 elections. CNN’s Chris Cillizza took the opportunity to do a bit of dancing on the grave of the right’s last populist movement before its current populist movement.

The new compromise budget deal — again, assuming it passes — would raise spending limits by $321 billion over the next two years. As The New York Times’ Jim Tankersley noted on Twitter Monday night, discretionary spending (meaning government-authorized spending outside of entitlements like Medicare and Social Security) is now projected to grow at 4% for Trump’s first term. In then-President Barack Obama’s first term, which saw the rise of the tea party in opposition to out-of-control government spending partly in response to the economic recession of 2008, discretionary spending rose at 3%. (In Obama’s second term, discretionary spending dropped by 2%.)

CNN’s Manu Raju caught up with Cruz, a leading voice in tea party circles and a strong opponent of raising the debt ceiling in the Obama years, on Tuesday morning — asking him for his thoughts on the latest compromise. “Just call our press office,” Cruz told Raju. So, yeah.

The truth is that the tea party was on its way out before Trump emerged on the scene. Almost since the moment the tea party movement pushed through the Budget Control Act in 2011, politicians — on both sides — have been trying to claw back some of the spending they gave up in that deal.
But the emergence of Trump — and congressional Republicans’ complete capitulation to, well, Trumpism, has clearly sped up the death of the movement. He doesn’t care about debt and deficit and so now neither do they.

Looking back over the last 10 years, it’s a remarkable arc. The tea party was the dominant movement in American politics at the start of the decade — seizing control of the Republican Party and pushing out Speaker John Boehner (Ohio) in the process. But then the tea party forces watched as Trump grabbed the GOP by the throat and (still) hasn’t let go.

The tea party has been left dead by the side of the road, one of the many casualties of the presidency of Donald Trump.

Cillizza isn’t wrong, but there is a simpler lesson also that is timely for the present political environment. The modern history of US politics is that the political party that cares about deficits and spending is the one that is out of power, and that is only to use to subject as a cudgel against the party that is in power. If Trump is re-elected, Democrats will be all too happy to lob spending and deficit ammunition at the White House, and rightfully so. If Trump loses, expect the right to suddenly find moral outrage at the deficit again as a tried-and-true weapon of choice against whoever the new president will be.

The Tea Party was a populist movement. No matter what noble goal such movements start with – and deficit and spending is one – populism always fragments from the sum to the various interests of its parts. The Hoffer Principle applies to each and every instance of these movements: “Every great cause begins as a movement, becomes a business, and turns into a racket.” The Tea Party closed that circle impressively quickly. After propelling a Republican mid-term success, the business took over as the organic, leaderless movement started fracturing off based on various people trying to take ownership and harness the power of it. PAC’s and other organizations popped up all over with the “Tea Party” moniker attached. Once a Republican Congress set about actually cutting things, however, enthusiasm waned. The frustration that caused the Tea Party in the first place quickly started to turn on the party elected on promises to the group but found mostly business as usual in the halls of the Capitol. The re-election of Barack Obama to a second term meant that one brief moment would be the movement’s one and only legislative success, and by 2014 and nearly every year since, the discretionary caps were raised and became a joke for fiscal hawks and leverage for government shutdown theater.

All of which paved the way for the current populist movement, which hardly had to break stride stepping over the gasping, expiring corpse of fiscal conservatism as a man who made his fortune on debt and bankruptcy descended his golden escalator and rose to the White House. President Trump barely bothers to deliver lip service to spending and deficits, and after the last shutdown fight apparently neither he nor the Democratic leadership had the stomach for a repeat of failure theater during a presidential election cycle. What’s a few trillion more when there’s campaigning to be done, and monetary policy doesn’t make for Twitter fodder like fighting with freshman congresswomen or immigration does.

Thus the Tea Party passes into history, but also into myth. It started with a noble cause, but for every few signs demanding government accountability, you could find someone demanding a long form birth certificate, or demanding a defense against immigrants or Muslims, or several demanding an end to the Federal Reserve, or a dozen other pet political policies. Because that’s how populist movements always go; a group forms for common cause but can not sustain itself for the same reasons that allowed it to form. President Trump’s success, by design or luck, was regathering those diverse parts back under a single banner. In doing so, he managed to take the Hoffer principle and do all three steps seemingly simultaneously, riding his cause to the White House while the MAGAland grifters make good bank in the various orbits around him. In short, making the cause a racket was the point.

But the power brokers paid attention, and learned, and adapted, and what followed down that populist path of frustration and “do something” now sits in the White House, while many of the same people shrug at a policy they took to the streets over for the last presidents. Which leaves another lesson that should be learned now: While President Trump operates mostly on instinct rather than strategy, and benefits greatly from the inability of his opponents to counter him when they are not overreacting, people who do political strategy are very much paying attention and taking notes. When the populism movement that President Trump sits at the head of collapses, and searches for its next shape to shift into, there are those ready to mold such sentiment.

We saw it this past week in the so-called National Conservatism conference, where the successes of Trumpian Populism is starting to be shaped and molded into a new spin on an old argument that culture and national identify must be saved by the righteous power of a populist movement demanding it to be so, and of course controlled by folks ready to be voted into office based off it. The only logical conclusion for this next movement will be a demand that government step in and make their wishes come true, a well-trod path in the era of executive action and congressional gridlock.

But that fight is for tomorrow. Today, the fight for deficits and spending is dead and can be mourned. Until it’s politically expedient to bring it up again. Schedule that resurrection for January 2021, if you want to watch the stone be rolled away.