Sunday Morning! On Reading (and reading and reading) Thomas Wolfe 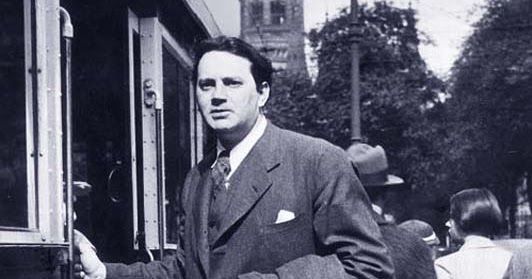 So, I complain one week about a television series taking 8 hours to get through, and the next week I read a 700 page book!

This week, I did also read some short stories, but much of my free time was occupied with Thomas Wolfe’s mutilated orphan opus The Web and the Rock. At the time of his untimely death, caused by what could be called “galloping tuberculosis” at age 37, the writer left a huge “skeleton of a novel” at over a million and a quarter words, more than two hundred chapters, and about five thousand pages, which Wolfe’s second editor, Edward Aswell, subsequently edited within an inch of its life to form: The Web and the Rock, its sequel You Can’t Go Home Again, and The Hills Beyond– all published after Wolfe’s death. And most of this material was remainders from his earlier novels, cut out by the frankly heroic Maxwell Perkins.

There are debates about who “really wrote” the posthumous novels because Aswell’s work apparently went well beyond standard editing. John Halberstadt explains: “Aswell would take a few pages from a chapter or variant version of a chapter, a few pages from a second, write a line himself, then mix in third and even fourth sources until he had the hybrid he desired.” Wolfe’s biographer considers this butchery. Harold Bloom, somewhat curmudgeonly, thinks Aswell at least made Wolfe more readable than Perkins had. All I can say is start with Time and the River and see if you want to read more.

Wolfe would be better described as an overwriter than a writer. When he gets going, he is carried along ebullient in a raging river of words and descriptions. It’s not for nothing that his most frequent images, the river and the “manswarm”, are turbulent, surging masses. His main character, George Webber, is essentially himself, and Wolfe never uses the “iceberg method” of characterization: everything there is to know about his characters is out there, naked and raw and quivering, glowing from within, or just crumbling from the sheer exhaustion of it all. It’s all a bit too much, really. One feels as if we’re hearing an oral deposition from a genius in the throes of a manic episode. He frequently loses all control and tumbles downhill in an avalanche of words. At points, the sheer energy of his prose is exhilarating. At others, it becomes ludicrous, and it’s as if Wolfe couldn’t tell the difference. The Kirkus Review wondered: “Whether or not he would ever have outgrown his utter inability to select and discard, his obsession with himself and his actions and motives and emotional turmoils, and built upon the queer streak of genius to greater things, we can never know.”

“She paused, animated, laughing, flushed with the eagerness of her story. She paused by the river of life and time. And for a moment Monk had a blazing vision of lost time. He heard the strange, sad music that time makes. For here, delivered to the punctual and unshadowed minutes, was this warm breathing flesh stored with the memories of a lost world and the ancient days. The ghosts of the forgotten hours moved about her and the strange brown light of memory shed its unearthly glow upon the moment’s actual light. A vision of old prints and readings, a potent and evocative past Monk had not seen but which was mixed with his blood like the foods of the earth he lived on flashed through his spirit its vivid and unspeakable sorrow.”

Okay, so she paused in her story?

Here’s the thing- Wolfe did have his moments of brilliance, and more of them than most writers. His essay “God’s Lonely Man” is genuinely beautiful. Time and the River was an unlikely bestseller, but is the still the sort of novel that makes you want to become a writer. He’s sort of a “writer’s writer” and was an inspiration for everyone from Kerouac to Philip Roth. As every third article on Wolfe notes, Hunter S. Thompson paid tribute by borrowing from his line (in The Web and the Rock): “The abominable memory shrivels, shrinks, and withers up his heart in the cold constriction of its (ahem!) fear and loathing.” Henry Rollins has called Time and the River one of his favorite novels of all time, and I certainly loved it, once upon a time. I think the only people who read Wolfe today are those who heard him praised by a writer they love. I read him originally because I heard he once threw a party for my great-grandparents in Paris.

The Web and the Rock is as great as it is frustrating. It’s really the sort of novel that nearly every young writer attempts once: the tale of their first real love and subsequent heartbreak. I wrote one of them in my twenties, of which we will never speak again. Hemingway killed off the nurse who broke his heart in The Sun Also Rises. Henry Miller wrote at least five novels, including the “Rosy Crucifixion” trilogy, about his ill-fated relationship with June Mansfield. The Web and the Rock tells of a young boy from the South, keenly aware of all the strikes against him, who comes to New York, falls in love with an older, married woman, and struggles to overcome his own insecurity and self-hatred and find his way to writing a novel.

A model for many of these writers, definitely for Miller, and, in a strange way for Wolfe as well, was probably Proust- many readers still take In Search of Lost Time, which also depicts a young man royally fishing up his first serious relationship en route to finding his literary voice, for a real memoir. As a result, these novels all describe a young person struggling to make a first relationship work while also struggling to become a writer. This makes a certain kind of sense- both pursuits require great energy and focus, bring moments of sheer bliss and absolute agony, and mimic all of the symptoms of psychosis. But, ultimately, trying to pair the two is a bit like studying to become a veterinarian while moonlighting as a butcher.

To be fair, for a young writer, that first heartbreak probably was the most intense thing they’ve ever been through. And it’s possible that it always will be; as horrible as my divorce was, I remember being struck by the thought that, at least, it wasn’t as bad as the first time my heart was broken in my early 20s. Thank God! For Wolfe, the inspiration was a tempestuous affair with a wealthy, married, theatrical set and costume designer, Aline Bernstein, who was 19 years older and a creative genius in her own right. Wolfe depicts “Esther” as a great influence on his work, a patron, a savior, and an incredible cook. And, in return, “George Webber” is fairly horrible and insufferable. He pushes her away at every turn, often while deriding her Jewishness vitriolically, acts like a maniac, and eventually loses the great love of his life. This seems to be based in reality- by all accounts, Wolfe was not easy to deal with.

And let’s be honest, it’s extremely difficult to write about young love. When the characters are happily swooning over one another, the reader would like to garrote them; when things go sour, they’re even worse. Wolfe’s real theme is frustrated ambition and that point at which the great passion of youth ripens and rots. His work remains readable for a few reasons. Firstly, he is aware of how infuriating his central character is, in spite of that character being himself. He has perspective, something lacking in plenty of those first heartbreak stories. Secondly, what Wolfe called his “element of satiric exaggeration” is actually pretty funny when utilized. A writer can get away with all kinds of things if their jokes land. Finally, after reading a stack of contemporary stories and novels, I really needed a break from prose made of flat-ass sentences like: “He entered his apartment and put his keys on the table.” Sometimes, it’s okay to overwrite.

So, what are YOU reading, writing, watching, playing, or pondering this hot weekend?