In Which I Spend a Sleepless Night Contemplating the Cats Trailer 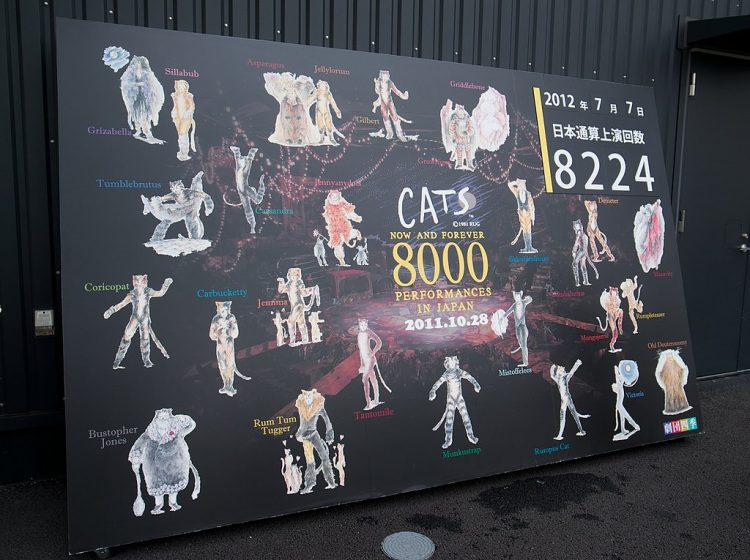 Photo by whity via Wikipedia Commons

While I love writing and commenting on politics, after this particular week of roasting marshmallows and straw men over the licking flames of our sociopolitical dumpster fire, I couldn’t bring myself to do it again. We, both individually and as a people, need a respite. Something decidedly non-real, more whimsical or fantasy based, something just totally bonkers and mindless to distract.

But where to find such a thing…

As I am prone to do, I had a sleepless night. Which leads me often to much reading and down many an interwebs rabbit hole seeking out new and exciting things to ponder, contemplate and percolate on. On this particular long nights journey into day, I stumbled onto what is apparently a big to-do over a movie trailer.

I really like movie trailers. I like them more than movies. They stir the imagination. I can take those mini-music videos and my mind can run wild with the awesomeness of a perfectly taut story set at the perfect pacing and perfect setting to the perfect cinematic experience, all but forcing me to want to see said film.

Or at least, that’s the idea behind movie trailers in general.

Apparently, that was not the reaction to the trailer for Cats:

Forget politics, you folks are getting 1300-odd words about this right here.

Cosmopolitan (Hey, I’m already out of my comfort zone here anyway, why not) chronicled the online carnage:

Hey! So, um, the Cats trailer just dropped, and it is………questionable, at best. It features every celebrity you can list animated as a cat, and as appealing as that may sound to a very small section of the internet, it’s actually pretty scary IRL!

Twitter, as you can imagine, is having a field day with this. They’re pointing out the most ridiculous parts, obviously, like the fact that the cats have breasts (last time I checked, cats
don’t have breasts, you guys) and that Taylor Swift’s in particular is wearing kitten heels.

There are no words. Literally no words to even begin to describe what just happened. Please note that the comments on Taylor’s video are conveniently turned off. Shocked!

Without further ado, the tweets. First, people are comparing it to a literal nightmare.

You get the idea.

I know practically nothing about the musical Cats. I am vaguely aware that there was a stage production of singing and dancing of the cast in cat outfits, and that it was one of the longest running musicals ever on Broadway and in London’s West End. I openly confess I’m not a big Broadway person, but I have taken in show both on Broadway (once just to say I did it) and in London’s West End (several times) and generally enjoyed the experience. But, no, show tunes do not dominate my playlist and I would have to — at best — fake my through a conversation with a true theater fan.

Which makes me relatively unbiased, I think, or at least hope, to wade into the explosion of reaction to this Cats trailer. Base camp for “explosion of internet reaction to X” for me these days is mostly to roll my eyes and then decide not which side to take, but whether it’s worth the time finding out what is actually going on or not. In this case the insomnia won, so here we go.

I’m told by our modern-day Oracle of Delphi, Wikipedia, that “Cats is a sung-through musical composed by Andrew Lloyd Webber, based on Old Possum’s Book of Practical Cats by T. S. Eliot. The musical tells the story of a tribe of cats called the Jellicles and the night they make the “Jellicle choice”, deciding which cat will ascend to the Heaviside Layer and come back to a new life.”

Let’s just stop right here for a moment of sanity. Andrew Lloyd Webber. Doing a play about anthropomorphic cats. Based off a TS Eliot poem. As a musical.

“It’s not realistic” is not the direction to go in criticism here.

“It’s too realistic” probably has more merit, and we just had this conversation about the CGI in The Lion King. The term getting thrown around a bunch on this is “uncanny valley” which is used for that weird grey area when the technology gets close enough to the real but not quite, so that it becomes cringe worthy. If you take Twitter’s word for it, the Cats trailer is to uncanny valley what the Charge of the Light Brigade was to military tactics: a bad idea but is going to make one hell of a poem in a few years about the spectacle of it all.

Which brings us back to the 2:23 of visual overload that is the Cats trailer. Having no idea what anything at all was supposed to be, watching that trailer immediately induced a strong response of “What the…” followed by long stretches of contemplation and wondering if I had mixed up my meds. But then I started reading, and digging, and going through more information. I recognized many of the actors. James Corden, Judi Dench, Jason Derulo, Idris Elba, Jennifer Hudson, and Rebel Wilson all look like fantastical but recognizable likenesses of themselves. Ian McKellen looks exactly like Ian McKellen normally looks, not sure if that was intentional or not. Taylor Swift is also present, but I like my mentions on social media so in the spirit of not murdering them let’s move on. That white cat -I’m told the character’s name is Victoria-prominently featured is Francesca Hayward, a principle of the Royal Ballet. Her day job is obvious, as any search of her dancing, performing, or frankly just walking and talking, shows her to be the beautiful, almost ethereal, embodiment of one of the best dancers in the world. Exactly who one would suspect of having a leading role in a musical about anthropomorphic cats. It is practically typecasting.

Which makes me pause at the craziness both visually and in reaction. This isn’t Steven Spielberg, who once harbored dreams of adapting Cats himself, recreating Omaha beach on D-Day. This is Broadway cranked up to 11. It’s supposed to be way over the top and insane. Lithe and weird and bizarre and unnaturally natural. You know…like a real life cat, those fur balls we kid ourselves into thinking we own when really they are playing their humans while they secretly plot world domination.

Whether something like Cats succeeds or not is usually based on being able to find some human moment within all that craziness to make it related to people. This is where stepping back from initial reaction to the trailer is a good thing. There are folks who have nearly 40 years of history with this material, and many more somewhere on the time spectrum since its debut in 1981. I can initially laugh at it but I have to be honest about a strange parallel of the last few days. If I get overly amped up by the Top Gun trailer that instantly makes me a kid again wanting to fly planes, someone who’s spent a lifetime warbling “Memory” in the shower and at their horrified family members probably feels the same and is excited to take their kids and loved ones to an experience they had as a kid. So who am I to judge?

There was one particular thing that really drove that point home: watching the “making of” clips that are floating around. Judi Dench was being interviewed and told the story of how she was cast in Cats way back in 1981, but tore her Achilles tendon, and since Cats on crutches doesn’t work she was told then -and believed till now – she was done with Cats. Yet here she is, in all her excessively furry glory. For as over-the-top as Cats is, if the stated purpose is a story of inclusion and redemption underneath all that singing fur, that is the kind of story that you could sell me on.

So why not Cats? I’m a sucker for second chances. Even when sung at me by talking, dancing, uncanny valley cats. Twitter mob be damned.