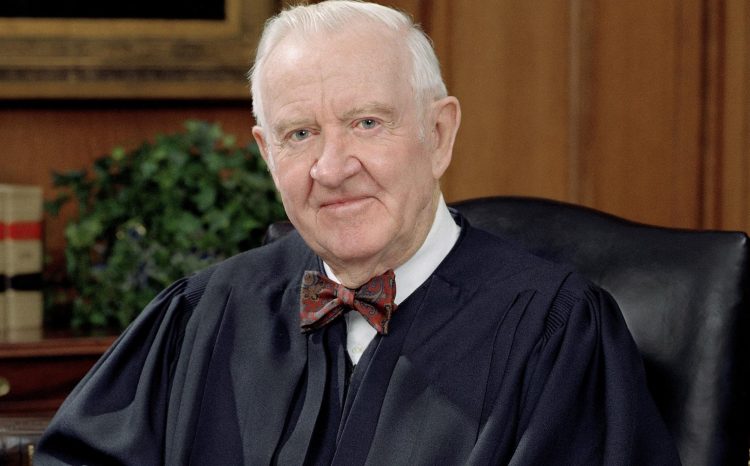 Photo by Steve Petteway, photographer for the US Supreme Court [Public domain]

John Paul Stevens, who served as an associate justice of the US Supreme Court for 35 years, died today at the age of 99.

A World War II Navy veteran and graduate of the Northwestern School of Law, Stevens was a Republican when nominated to the court by President Ford. He was a conservative justice early in his stint on the bench, voting against affirmative action and for the reinstatement of capital punishment.  But his jurisprudence inched leftward over the years; he authored dissents in Bush v Gore and Heller, and read aloud a strident dissent in Citizens United shortly before retiring. Stevens later said his difficulty in reading that dissent out loud prompted him to step down, at the age of 90.

Of his supposed shift from conservative to liberal, Stevens told NPR in 2010 that he had not change; rather, it was the “radical” conservatism of the justices who had taken seats on the court which made his ideology appear liberal.

But Justice Stevens was never easy to categorize nor predictably partisan, voting against both President Clinton and President Bush (the younger). His 35 years on the bench gave him the opportunity to hear and decide cases on nearly every major issue of our time, from abortion to gay rights and gun control. His reputation was as an even-handed and congenial man, though he allegedly became visibly angry during oral arguments in Texas v Johnson, when Johnson’s lawyer’s defense of flag burning was too flippant for his liking. Stevens dissented from the majority opinion which struck down the Texas law against flag burning, an opinion he held for the rest of his career.

Justice Stevens was the third longest sitting justice and the second oldest to serve. He leaves behind two daughters and several grandchildren