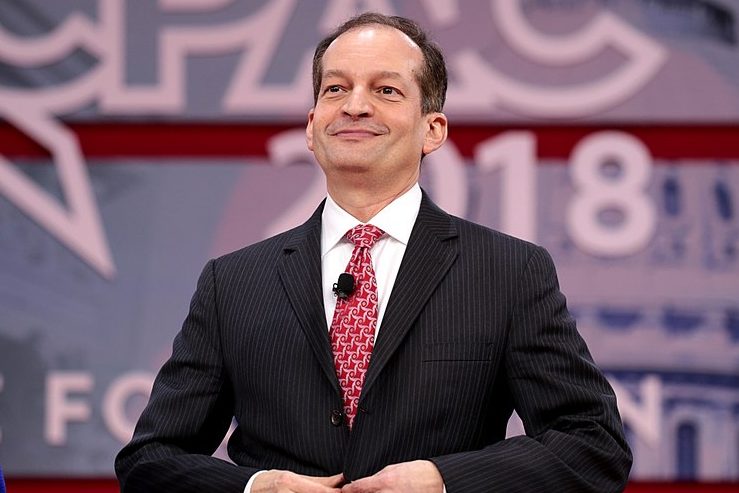 The head many have been calling for since the details of Jeffrey Epstein’s plea deal were first reported has finally rolled:

President Donald Trump alerted reporters this morning of Acosta’s departure. “This was him, not me,” said Trump as Acosta stood beside him.

Trump, who saw Acosta largely as a source of favorable monthly statistics about unemployment and job growth, called Acosta “a great labor secretary not a good one” and “a tremendous talent. He’s a Hispanic man, he went to Harvard, a great student.” Trump indicated that he was satisfied with Acosta’s explanation for the plea deal in Wednesday’s news conference, saying, “He explained it.”

But Acosta has had a rocky relationship in recent months with other White House officials, including acting chief of staff Mick Mulvaney, over the perceived slow pace of deregulation at the department. And one person familiar with the situation said that although Trump initially thought Acosta handled the Epstein controversy well, over the last couple of days the president saw the negative press and didn’t like it.

“POTUS is not a fan of bad press, especially when other people make him look bad,” this person said.

Acosta, a 50-year-old Harvard-educated lawyer, came newly under fire for the lenient 2008 plea deal after Epstein was re-arrested July 6 in New York City and charged with sex trafficking. Under the earlier plea agreement, Epstein served only 13 months of an 18-month term and was permitted daily furloughs to go to the office. Epstein also was required to register as a sex offender and to pay restitution to his underage victims.

At the White House this morning, Acosta told reporters: “Over the last week I’ve seen a lot of coverage of the department of labor. And what I have not seen is the incredible job creation that we’ve seen in this economy. more than 5 million jobs, I haven’t seen that…. I do not think it is right and fair for this administration’s labor department to have Epstein as the focus, rather than the incredible economy that we have today.”