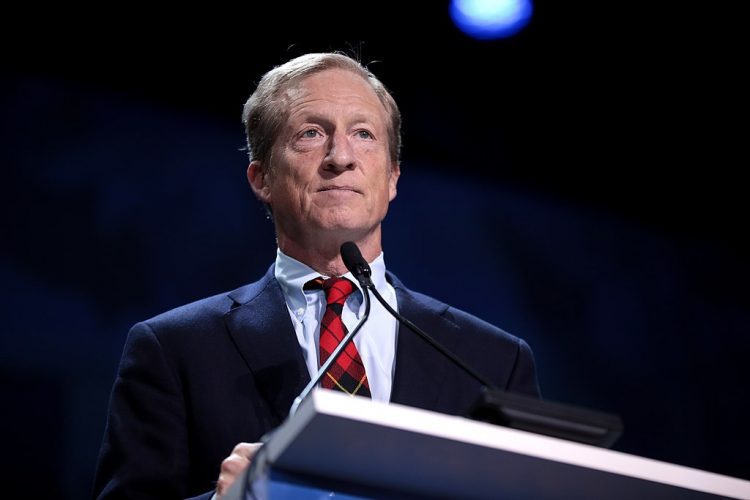 Tom Steyer has a problem with you people and how things are going, and you’re going to hear about it, even if it cost him more millions of dollars than he has already spent on his political causes:

The presidential-campaign announcements may not be over yet—with the latest potentially coming from a person who ruled out a run just a few months ago.

The billionaire investor Tom Steyer, who in the past decade has been both the top Democratic donor in the country and the prime engine for pushing for the impeachment of President Donald Trump, appears ready to become Democratic candidate No. 26. Last week in San Francisco, Steyer told staffers at two progressive organizations he funds, Need to Impeach and NextGen America, that he is launching a 2020 campaign, and that he plans to make the formal announcement this Tuesday.

But don’t take that to the bank yet—Steyer had told people to expect his presidential run in January, and he had even scheduled a trip to Iowa for a kickoff, only to change his mind in the final days before the launch. That resulted in what was perhaps a first in presidential politics: a trip to Iowa to announce he was not running. Instead, Steyer hosted a town hall for his Need to Impeach group, which currently has 8 million members and in the space of two years has become the largest progressive-leaning organization in the country.

Similarly, Steyer had been expected to announce a U.S. Senate run in 2016 and a gubernatorial run in 2018, both for California. He had even recorded a commercial for the latter run before pulling the plug. (Multiple people on his staff learned that he was not running then from public reports.)

The 2020 race has remained alluring, though, especially considering that there won’t be an open Democratic race for California governor until 2026 and that he’s unlikely to be the top pick for a California Senate seat. At 62 years old, Steyer knows that the time for him to run is now or never, people who’ve spoken to him tell me.

Setting aside that Steyer has little chance of doing anything meaningful in the race, at about the same time Steyer was — reportedly — girding his loins for a run he said in January he wasn’t making, the latest polling from ABC News shows that Steyer’s personal quest for impeachment is losing significant ground:

Personally, moreover, a broad 65 percent say that since taking office Trump “has acted in a way that’s unpresidential,” not far from the 70 percent who said so in mid-2017 and early 2018 alike.

Just 28 percent in this poll, produced for ABC by Langer Research Associates, say his behavior is “fitting and proper” for a president.

That said, support for Congress initiating impeachment proceedings against Trump remains unchanged since April at 37 percent, while opposition to this step has grown by 13 points since August to 59 percent, a new high. Sixty-one percent of Democrats favor impeachment action, but just 37 percent of independents – and 7 percent of Republicans – agree.

That’s below the public opinion Mendoza line, and being on the wrong end of a 60/40 issue ought to be bad enough. Making that the single issue of your campaign smacks of hubris, especially since a presidential campaign that succeeded would make said issue mute.

.@realdonaldtrump has no strategy. He has an attitude: belligerence. It’s no surprise that he is failing.https://t.co/9Q3uzgah1A

Steyer doesn’t appear to have a plan either other than “has money, wants to run” and a good deal of belligerence that the world isn’t turning his way despite decades and millions of dollars of investment in his political causes. Good luck with that, Tom. If you get in.