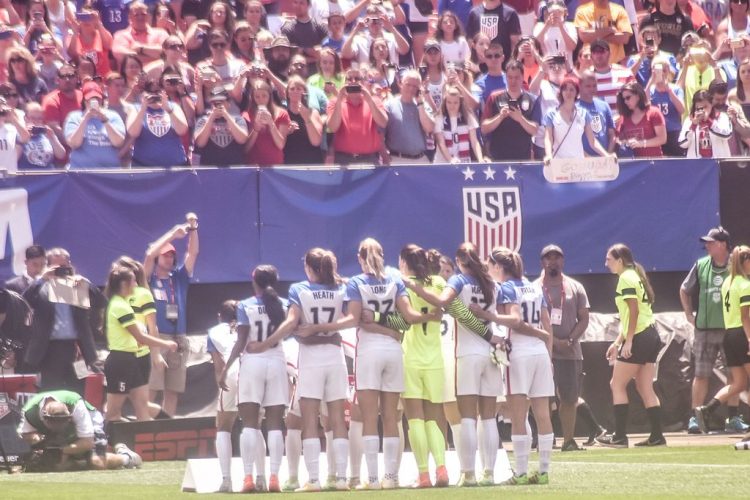 The FIFA World Cup trophy glistened as it was brought to the waiting, hungry arms of the champions — the United States Women’s National Team. It was Carli Lloyd who beckoned it with her eyes, eagerly hoisting it above her head for the world to see. As I watched these women surround each other cheering and hugging, a surprising emotion swept through me: hope. Unbridled, unconfused hope.

In a perfect world, sports has nothing to do with the politics. In a perfect world, we can witness men and women at the top of their game – these physically transcendent specimens of the human race – perform their awesome feats for a global audience and we simply get to marvel at the spectacle.

These women were not granted this privilege, for it is a truth universally acknowledged that a group of women in possession of raw talent and singular vision must be attacked by legions of baffled idiots.

The women who raised the World Cup trophy today did so despite playing under systemic inequality. For her outspokenness on the issue of equal pay and injustice as it exists more broadly in the United States, team captain Megan Rapinoe was specially targeted by the highest office of this country. But the President of the United States is not the only diminutive character attacking this team.

Megan Rapinoe and star forward Alex Morgan spent much of the press tour before the semi-final with England answering for their perceived arrogance. Arrogance is an oddity in that it requires as much intention on the offending party as it does perception on the offended party. If you go looking for it, you’ll find it everywhere (see: Twitter). For women to joyously whoop and cheer goal after goal, win after win earns them the right to be arrogant. Being at the top of your game earns you bragging rights.

They are proud. They are not braggarts.

I watched the team that calls itself “23 best friends” play with tenacity for 95 minutes. However close they may have been a month ago, there is no doubt their bond is now unbreakable having withstood international attacks on their character and talent, resentment at their success, and that constant bully – pure misogyny.

None of the women were thinking about any of this backlash for the 95 minutes of play, that’s for sure. Everything seemed to dissipate on the pitch, and we witnessed a marvelous game.

The US scored two poetic goals in the second.

Alex Morgan, unfairly punished with a spate of elbows-to-her-face, kicks-to-her-shins, tackles-at-every-corner was felled by kick to her arm, garnering a penalty kick. Megan Rapinoe scored on a penalty kick, and the sports bar I was in erupted in wild cheers and dancing at that second, but what I will always remember is her face: the bright intensity of her eyes under a smooth, unlined forehead, her jaw loosening as she caught the gaze of someone to her left…and then immediately after scoring, the brilliant smile as she runs to the side for her trademark “Are you entertained?!!!!” pose. Less than ten minutes later, Rose Lavelle demonstrated unbelievable grit, collecting the ball just over mid-field, masterfully weaving through opponents oh-so delicately to the goal before pounding it to straight net for the second goal.

This tournament, and everything associated with it for the last several weeks, is a masterclass in tenacity and heart for everyone, especially women. Keep going, keep going, keep unapologetically going.

I can think of no better manifestation of what it means to be American.

For all this, they should at the very least be paid the same as the men’s team.

And honestly, that’s the tea.

Saana Allie is one of those obnoxiously proud New Yorkers who needed a minute to consider Washington, DC home but it’s finally happened. Her passions are policy, politics, culture and about 47 creative projects she swears she will finish soon. Saana holds a Master’s Degree in International Relations and International Economics from Johns Hopkins University School of Advanced International Studies and also a pretty great TikTok account. She is most proud of having a 100% success rate sorting people into the appropriate Hogwarts House.