West Virginia on a Technicality 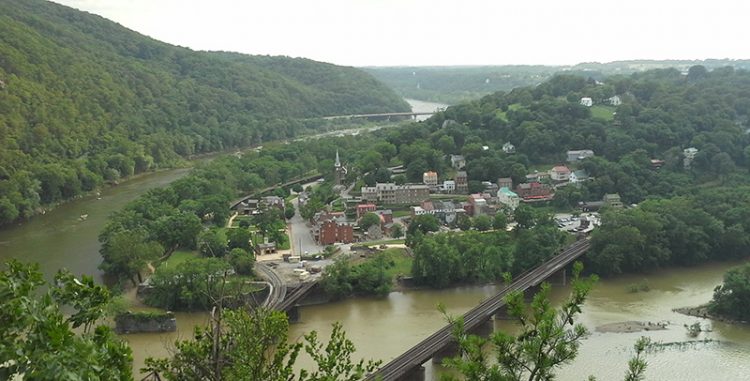 We had our own West Virginia Week here at Ordinary Times because, mostly as a matter of chance, most of the editorial staff has some sort of tie to the state (being from here, living here, or both). I don’t have as much to say about West Virginia in particular, though, because while I live here it’s mostly on a technicality. A quirk of the border. Aaron Rogers could throw a football from here and hit either Virginia or Maryland. We are closer to five state capitals, and the national one, than we are to our own state capital. We have rail to DC, beer sold on Sunday mornings, and have never had any coal. Our county is the wealthiest in the state, second most educated, and second most Democratic. When we need bigger city amenities, we usually go to Maryland or Virginia. You get the idea.

The stigma attached to West Virginia – or maybe it’s the amenities – give the state a discount. Cross the state line into Maryland and house prices jumped about $25,000. Cross over into Virginia and it’s $50,000. My wife and I are not too proud to have West Virginia license plates, so we might have taken advantage even if the job that brought us out here hadn’t been in this state. A discount is a discount. We have the advantages of urban access at the cost of ruralia.

The county also takes advantage of West Virginia’s looser gambling laws, with a large casino as one of the major employers. Also, looser higher ed laws put one of those for-profit colleges here too. And Robert Byrd put two major government job centers here, in addition to people commuting from here to points closer to DC. Which is fewer than you might think, because nobody wants to live in West Virginia if they can avoid it.

Unless, that is, you’re a Republican from a blue state and want to run for office. The state’s attorney general came here from New Jersey and planted his feed here. Our congressman previously held office in Maryland but did the same for largely the same reasons.

Living on a fingertip does have some distinct disadvantages. My wife’s medical license was obviously in this state and so when she left that job it exponentially strengthened an already expansive non-compete clause, effectively making it a year before she would work anywhere near here1. Also, without tax reciprocity agreements the tax situation would have been complicated. Such is the way of federalism.

For me in particular, the areas outside the state hold an almost magical allure. They’re my secret origin story. Near here is Hagerstown, where my family lived before they moved south when I was two. My brother was born there. When you live somewhere all of your life, but then you hear about this other place you lived but have no memory of living, it becomes a magical sort of city. A place of legend. Once a week I drive my daughter to Leesburg for swimming lessons. I drive past a place called Waterford, where my grandmother used to live. It’s the place around here I do remember. We never lived in Leesburg, but I’ve had a relationship with it all of my life. Any time I have had to fill out a form with an entry for the city in which I was born.

The official story goes that Mom, the third generation born in Loudoun County, wanted a child born on Virginia soil. Knowing that I was their last child, she insisted that I be driven across state lines so that it would happen. And that’s how I became the fourth generation native Loudouner. The truth is that she had some bad experiences, bad care, and a miscarriage at the Hagerstown hospital and vowed to do things differently if she got pregnant again. I like the official story better.

But all of these places I spent my entire life hearing about have suddenly become real places. It helped make living in this state that I had never been to before feel more like home.

If things go according to plan, we will be leaving next summer and probably never looking back. When we moved here, we did not have the intention of staying. It was a one-year fellowship. When she accepted a job with the program it still was not seen as a permanent thing. Even after we bought the house we were pricing out how long we had to stay in it to break even. The job went horribly, things after the job went horribly, and things surrounding the job and unrelated to the job also went horribly. We will not look back on our time here as a happy one. But very much to our surprise the area really grew on us and we have acknowledged that if we could have stayed- and if there weren’t all of the baggage – we just might have.

If you need to move to the western part of greater DC, West Virginia may well be its best kept secret.