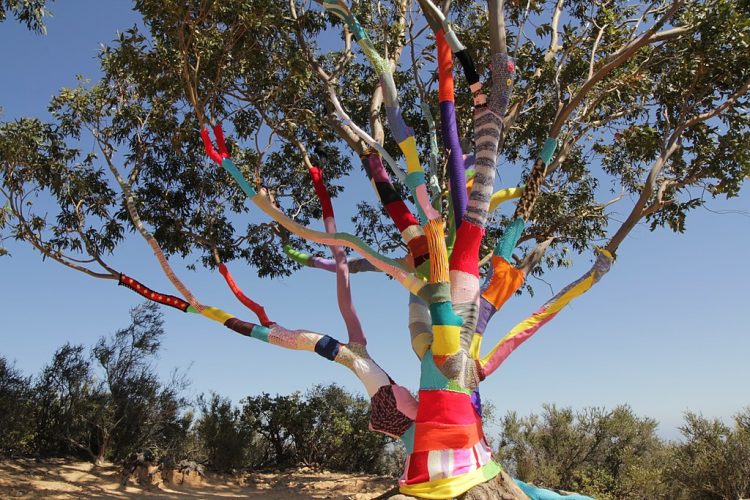 Photo by Rebmobnray via Wikimedia Commons

“Fiber Arts” is an awesome term.

Outside of its 8 million users, the website Ravelry received its first wide-spread notice outside of the community it has served since 2007 in recent days. Their site and community, in their own words: “functions as an organizational tool for a variety of fiber arts including knitting, crocheting, spinning, and weaving. Members share projects, ideas, and their collection of yarn, fiber, and tools via various components.” And now known to most of the socio-political world as that site that banned all things Donald Trump:

The popular knitting and crochet website Ravelry says its 8 million members are welcome to garter, seed or purl stitch their way through thousands of online patterns — but if they want to cast on with any pro-Trump views, they need to do it somewhere else.

The website’s administrators announced Sunday that Ravelry is “banning support of Donald Trump and his administration” in any form, including “forum posts, projects, patterns, profiles” and anything else.

Ravelry said its new policy is not an indication of support for one party over the other. It also said members are not allowed to entrap Trump admirers into political discourse on the site.

“Antagonizing conservative members for their unstated positions is not acceptable,” administrators warned.

They did not specify any aspects of the Trump administration’s policies that they regard as white supremacist.

I know nothing about this, so I reached out to folks I know that did and who religiously crochet and are active members of that site. The progressive ones were over the moon happy. The conservative ones mostly rolled their eyes and thought, while the site’s response was over the top, there was an issue with people being offensive in the name of MAGA. This wasn’t an out-of-the-blue political statement, but a long running issue of folks using the president as an excuse to post all sorts of things that ranged from inappropriate to out-and-out white power stuff. While you can argue that “all Trump supporters are racist” is too far and too broad a brush, it’s their site and they can do as they see fit with it. Those who want to fit this into the running narrative of “the internet is out to get them” will no doubt make a huge stink, even though most of them have no idea what the site or community involved.

The one thing that people on all political sides who are active users of Ravelry agree on is that they will lose users over this, it’s unfortunate, and oh by-the-way did you see that great new pattern. The fiber arts will continue apace once this outrage subsides. The debate about sites choosing to manage their content will continue. The lesser beings that want to use politics as cover and excuse for their hatred will infiltrate something else.

And so the world turns.