In the summer of 1941, an FBI agent approached William Carlos Williams in Rutherford, New Jersey, to inquire about Ezra Pound:

“First he asked Williams if he had heard Pound speaking on the radio, and Williams said no, he had not. Then the young man proposed that Williams should listen to a recording of Pound speaking one of his broadcasts to identify the voice. Williams paused for there was something sinister about this circular proposal. ‘How can I be absolutely sure?’ he asked. The FBI man pressed him. ‘All we ask is that you identify the voice as that of Ezra Pound.’ Williams was cautious. ‘I can say that the recording I hear sounds like the voice of Ezra Pound,’ he offered, but this was not enough. The FBI man asked: ‘Are you a loyal American citizen?’

This is probably not a critical passage in The Bughouse: the poetry, politics, and madness of Ezra Pound by Daniel Swift. But it was most interesting to me because I read the book and also found this document in the family files this week: 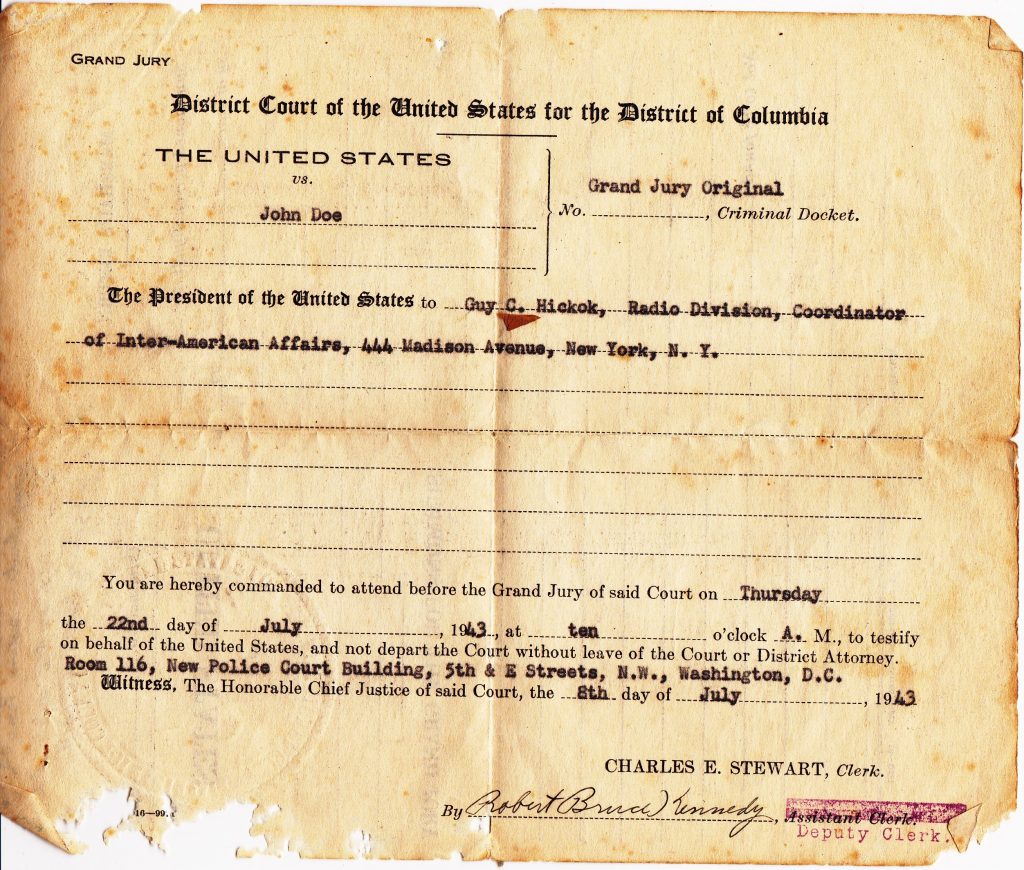 I imagine the conversation was probably much the same when my great-grandfather was approached to testify, although he probably would have tried to defuse the tension with a joke. I had heard two different versions of the story: one in which Guy was called to identify his old friend’s voice on the recordings, and one in which his wife Mary was called to testify. The trial-in-absentia was for the charge of treason. Pound must have forgiven my great-grandfather because they went to dinner after he was returned to the US but before his own trial. Ezra Pound never ended up testifying himself as he was declared mentally unfit to stand trial and held in Saint Elizabeth’s hospital for thirteen years.

There’s something absurd about a writer being asked to identify another writer’s “voice” from a recording. A poet’s most authentic voice is supposedly captured on the page, but every writer knows how easily that can be counterfeited. The speaking voice can be mimicked too, although in Pound’s case what was distinctive was what he said as much as how he said it, and that, for better or worse, would have been hard to imitate. Madness speaks its own patois. Given the things he said, many of Pound’s friends thought he was a crackpot. Was he mad though?

I think my great-grandfather saw Ezra Pound as more of the type of crackerbarrel philosopher one finds in small town America. But, by the time he was tried for the broadcasts he made for Italian Fascist Radio, something had changed dramatically about Pound’s tone, ideas, and view of the world. It’s just one of those ironies that Guy Hickok was, at the time, the chief of programming for America’s foreign short wave radio broadcasts, doing essentially the same thing for his country that Pound was doing for… whom? Mussolini? Himself? The world? The demons that consumed him?

Treason is a bit like art or pornography- we’re not entirely sure what it is, but we know it when we see it. It is more than simple disloyalty- one can be disloyal to one’s spouse or country without acting upon it, although there too Pound was disloyal. In terms of treasonous speech, it gives aid or comfort to the enemy. It is hard to imagine Pound’s broadcasts- those long, rambling disquisitions on history, economics, himself, Thomas Jefferson, Confucius, poetry, the war, and the Jews, of course- giving anyone comfort.

Pound certainly had theories about how the world worked and, like plenty of borderline crackpots, they seemed to start with a loose grasp of economics, particularly C.H. Douglas’s “Social Credit” theory, and moved on to a culprit for all the world’s ills- “usury” as practice and the “Jew” as archfiend. Jews became Pound’s Weiss Whale and antisemitism consumed him, as it does. Surely more extremists are sucked at the rancid teats of misogyny and Jew-hatred than any other toxins- perhaps it’s a relief that Pound wasn’t a woman-hater too. Years later, Pound would apologize to Allen Ginsberg for “that stupid suburban prejudice of anti-semitism”, but even that sells short the intensity of his vitriolic obsession. Thus, from Rapollo, Pound thought he had the solution to the world’s problems: save America from Jewish influence and back to the ideals of Jefferson and Confucius.

So, his ideas were insane, but was he crazy? Swift, to his credit, doesn’t try to answer that question, although certainly Pound was delusional and, from the sound of it, manic depressive. Swift tells about the different people who tried to figure the man out while he was in the “bughouse” and shows how notions of mental illness and psychiatry were in transition. At its peak, Saint Elizabeth’s held over 8,000 patients. By the time I was a child growing up in the suburbs of Washington, DC, it was known more for all of the patients who had been released en masse and subsequently swelled the homeless population of the city. Swift goes in with people like Charles Olson, T.S. Eliot, Robert Lowell, and Elizabeth Bishop for what he calls “the world’s least orthodox literary salon, convened by a fascist, held in a lunatic asylum.”

I love the image of different groups interpreting Pound’s poetry for varied reasons: the poets trying to learn from it, Swift as a literature professor trying to assess its merits in a larger conversation of poetry, the psychiatrists trying to deduce if Pound was mentally competent, and the government’s lawyers trying to tell if he was a fascist or traitor. I had an image here of state department investigators working ’round the clock to interpret the Cantos. Unfortunately, it’s only in my imagination.

The Cantos might be the best place to answer questions as to Pound’s mental state. He described them to my great-grandfather, when he began the work, as a history of all the states of the human mind since Homer. They eventually reached over 800 pages, which I have read and can’t recommend reading in anything but selected excerpts. The Cantos are occasionally beautiful, often absurdly pedantic and long-winded, spiked with bile, increasingly intensely angry, and ultimately don’t hold together or add up to anything coherent. Swift is right that: “The grand bad faith of the Cantos—its pomposity, its anger—is a constant, running line after line.”

Of course, Pound was also one of the most important poets of the century and echoes of his earlier poetry can be heard nearly everywhere afterwards. Many of those poems are still breathtaking. His works of literary theory are still refreshing and critical. Not to mention he was the tireless literary champion who, arguably, is the reason we can, today, read Eliot, Joyce, and Yeats, among others. But, when I read those later Cantos, I hear a mind that is trapped in itself and gnawing at the edges of its cell.