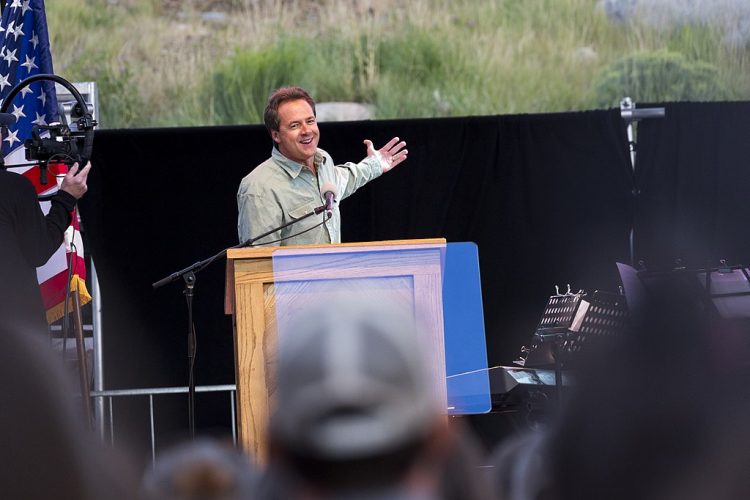 Montana Governor Steve Bullock has plans for the two debate nights at the end of June where the top 20 contenders for the Democratic Nomination for President of the United States of America will gather. But he isn’t one of them, so he won’t.

Bullock’s exclusion from the debates has been criticized by all DNC members from Montana. “We know many consider us to be fly-over country or little more than an ideal vacation spot, but we know we’ve offered countless invaluable contributions to the Democratic Party and our nation as a whole,” the top Montana Democrats wrote in a scathing letter to DNC chair Tom Perez earlier this month.

“The recent implementation of extra qualification rules for the June debates in Miami could deny the Democratic Party a voice representing rural America.”
Bullock, who was reelected in 2016 despite President Trump’s 20-point victory in the state, says he’s uniquely suited to win the White House next year. “As the only candidate who has won a Trump state, Governor Bullock will discuss his plans to win back the places we lost in 2016,” his campaign told CBS News about his town halls.

Which is fine, but few will notice since all attention will be on the twin debates in Miami. That are nationally televised.

I’m no fan of the DNC but with all due respect to the head man of the great state of Montana: Governor, this is a you problem. Gov Steve Bullock isn’t being excluded because he is from Montana; candidate Steve Bullock is being sidelined because he didn’t meet the absurdly low standard to be included. There just isn’t any excuse for not being able to fundraise on par with Marianne Williamson for the sitting governor of a state. If you got in too late to do so, if that is the excuse, then you are worse at campaign strategy than Marianne Williamson, and therefore don’t deserve to be there.

We do this as a country every March with the NCAA tournament. Folks will go to the social media mattresses over the grave galactic injustice of Unidirectional State being excluded because there is no way they are the 65th worst team in the country. “It’s so unfair, we are just as good as…”

If you are arguing to be the last included you don’t belong there. Frankly, a dozen of these candidates also don’t belong there. But since it’s now a done deal we will suffer through and at least be entertained by it till the adult table debate in September. If Governor Bullock pulls off an electoral miracle in July/August to be included in that one, fantastic. I’ll be the first to write that amazing story. But I won’t be holding my breath, or draft copy, and complaining and self-victimizing hasn’t won a primary yet. Well, except that one time..