On Climate Change, DNC Decide There Is Nothing to Debate 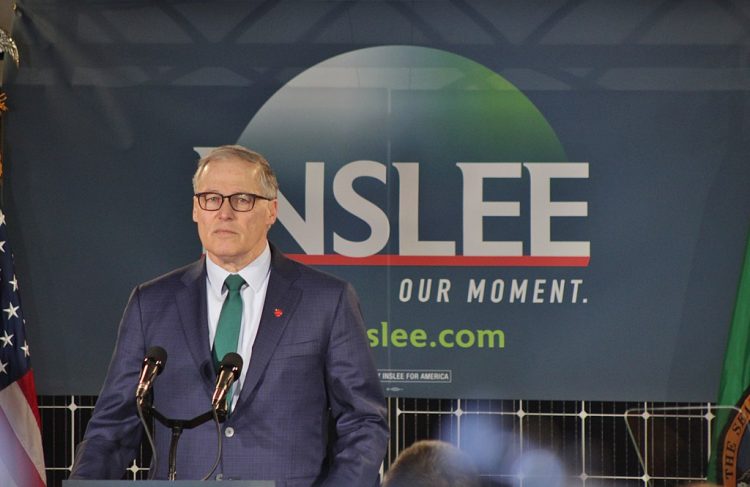 It’s been somewhat overshadowed by the much larger news of debate qualifications for the 3rd presidential debate, but the Democratic National Committee declined the calls by some to have a debate solely about climate change.

DNC spokeswoman Xochitl Hinojosa told The Hill the committee has emphasized to media partners the importance of climate change in the election but that the party’s goal is to have a rigorous discussion on issues like health care and the economy, alongside climate change.

“While climate change is at the top of our list, the DNC will not be holding entire debates on a single issue area because we want to make sure voters have the ability to hear from candidates on dozens of issues of importance to American voters,” she said in a statement to the Hill.

Hardest hit by this decision, at least judging by his reaction, is Washington State Governor Jay Inslee, who is running almost exclusively under the banner of environmental issues.

“Today, my team received a call from the Democratic National Committee letting us know that they will not host a climate debate. Further, they explained that if we participated in anyone else’s climate debate, we will not be invited to future debates,” Inslee said in a statement.

“This is deeply disappointing. The DNC is silencing the voices of Democratic activists, many of our progressive partner organizations, and nearly half of the Democratic presidential field, who want to debate the existential crisis of our time. Democratic voters say that climate change is their top issue; the Democratic National Committee must listen to the grassroots of the party,” Inslee added.

Inslee isn’t alone in thinking this, and the wording of his statement holds a lot of issues that have been long simmering between the activists and the DNC. Inslee might be right that “Democratic voters say that climate change is their top issue” based on polling, but the DNC isn’t trying to defeat climate change in 2020; they are trying to unseat Donald J. Trump from behind the Resolute desk.

Now, the activist are going to say those two things are not only compatible but championing the former is the way to accomplish the latter. The DNC knows that single issue debates, like single issue candidates, are problematic at best. Were you to host a debate with the Team Blue principles, the term “debate” might hold little meaning at all, since they mostly agree on everything other than the spending number and time table. Such sameness mean a climate change debate would be a detailed but homogenous policy discussion, well received by a thrilled environmental wing of the party and dismal viewership ratings from everyone else.

Few people are going to want to watch 90 minutes of folks mostly agreeing with each other. So what will happen is the candidates will start trying to one up each other on the specifics, such as spending more money, setting a faster timeline, call for the full banning of X, Y, and Z while their opponent only wants to ban Q, and so on. Such a debate would also feed plenty of clips for the commentariat to nitpick through, and pitch candidates against candidates. By it’s very nature such a debate would, policy and rhetoric-wise, be a race to the left-most reaches of a party that is trying to reckon with how the supposedly more moderate Joe Biden is dominating early polling. The DNC knows this, and despite their more progressive and environmentally conscious brethren pushing for it, are probably smart to nix the idea.

Under the surface though, what Jay Inslee was grousing about “the Democratic National Committee must listen to the grassroots of the party” rings true because it will be a running theme of the primary, especially with Joe Biden holding the front-runner status. The perception by some, real or imagined, of the DNC thumbing the scales to coronate Hillary Clinton in 2016 is still an undertow beneath the lapping waves of progressive folks’ insistence that this year is their year. “Silencing their voice” on this issue by confining it to the standard debates won’t help that fear, but unless it turns into something overly blatant it will not hurt them either. That is because with the new debate rules there is a good chance the “half the candidates of the Democractic presidential field” will be culled come September leaving decidedly in-favor party regulars to settle the nomination amongst themselves. Jay Inslee and the other 1% won’t be participating in anything after that unless they become 2%ers or better.

Come November 2020, regardless of the Democratic nominee, this election is a referendum on Donald Trump, and the economy and current events will feature heavily in that decision. Climate change is climbing in polling as an issue for voters, but 2020 probably isn’t the year that it is the deciding factor between four more years of the 45th or the dawn of 46th president. The “existential crisis of our times” will still be secondary in most Democrats minds to a clear and present need to “beat Donald Trump” for the duration of the campaign.