Religious Accommodations Are Good for US Military’s Spirit 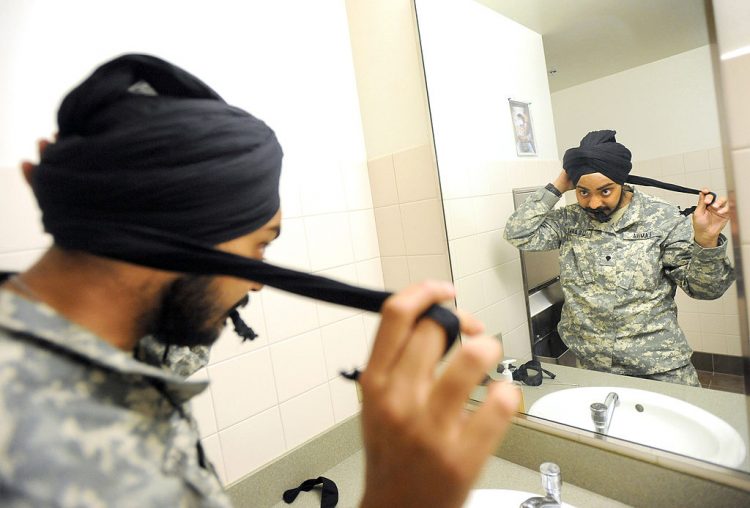 Sometimes you can be genuinely surprised by what does and doesn’t cause a stir on social media.

The U.S. Air Force has granted a religious accommodation to an active-duty Sikh airman that will allow him to wear a turban, beard and unshorn hair in accordance with his faith.

In a statement, Airman 1st Class Harpreetinder Singh Bajwa said he was “overjoyed that the Air Force has granted my religious accommodation. Today, I feel that my country has embraced my Sikh heritage, and I will be forever grateful for this opportunity.”

Bajwa serves as a crew chief at McChord Air Force base near Lakewood, Wash. The Air Force’s decision to allow him to maintain traditional Sikh customs in regard to his appearance is a “historic” first, says the American Civil Liberties Union. The Air Force was not immediately able to confirm that he was the first Sikh in their service who was granted such a waiver.

Bajwa is a first-generation American who enlisted in the Air Force in 2017, hoping to serve his country. In accordance with Air Force rules, but in contrast to his religious practice, he was required to cut his hair and remain cleanshaven, said Kamal Kalsi, a lieutenant colonel in the U.S. Army Reserve and founder of the Sikh American Veterans Alliance who helped Bajwa win his accommodation.

Well, that’s a nice little story in a mostly negative social media news cycle. So I send it out with what, at least I thought, was a pretty innocuous and common sense take on the matter:

The Sikh people have a proud warrior tradition going back centuries, along with a strong cultural ethos of honor and service. This is a proper accommodation to make and our forces will be the better for their inclusion. https://t.co/qsslzWyDKR

Most were overwhelmingly positive. But this being Twitter, soon came those who want to make trouble where there doesn’t need to be any. If anyone happened to be missing any straw men, red herrings, and non-sequiturs you can find a few floating around the replies there. There was some discussion of beards and gas masks, a legitimate concern that the new generation of equipment is addressing, but the ones that make you shake your head are the variations of “military as social experiment” and “slippery slope to people wearing hijabs and God knows what else” kind of stuff.

Don’t tell them hijabs have been allowed for 2 years already if the member follows outlines and receives permission. Especially don’t tell them this news:

For the first time, the Army is granting enlisting Sikh soldiers a religious waiver to keep their turbans and beards in basic training.

A Kings Park High School student in New York is one of 14 Sikh high school students who will be able to enlist in the Army and attend basic training with their traditional turbans and beards — the first ever waivers for enlisting Sikh soldiers, Military.com reported.

Manav Sodhi is among the first high school student to receive the religious accommodation. “I wanted to join the Army ever since I was a kid. My great grandfather served in the Army, and I wanted to follow his footsteps,” Sodhi said.

The Sikh people especially have a long and storied military tradition. Born out of self-preservation against the vast and powerful Mughal Empire, the Sikhs maintain strong martial ties in their culture and tradition. They have served in the armies of other nations, most notably in the British forces in both World Wars.

And since inevitably some will want to apply only the politics of the moment, it’s noteworthy that Sikhs in the US military were allowed their traditions until a rule change in the 80s brought them in line to the dress and appearance standards of everyone else. There have been various exceptions over the years, with the first public accommodation issued in 2009 to then-Capt. Kamaljeet Singh Kalsi, and has grown to the current policy of waivers that came down in 2017.

Like the country they represent around the world, the American armed forces are constantly changing and evolving. They always are a “social experiment” wherein an all-volunteer, multi-cultural, diverse recruiting base is amalgamated into the most powerful military the world has ever seen. Of course top down political tinkering happens, and is harmful, but reasonable religious exemptions are not that. The fact that the same rules that now allow the Sikhs their tradition also apply to the religious beliefs of Muslim service members and others so that both can serve the greater good of our nation while also their chosen God, is a very American thing. The wars between the Punjabi Sikhs and the Mughal Empire Muslims formed the former’s military tradition and culture of service and honor, and the fact that American adherents to those faiths can serve alongside each other, and for each other, is an American military accomplishment worth celebrating. Accommodating the 2nd and 5th largest world religions for military service, while also providing similarly for others, makes perfect sense in the religiously free United States.

As for the slippery slope, the new volunteers for American service say there is validity to the accusation, just not in the way the detractors think.

Army Lt. Col. Kamal Kalsi, president of the non-profit advocacy group that promotes Sikhism and military service, was the first to get a religious exemption in 2009, and said the latest enlistment waivers are a big step in religious accommodation.

“I was the first to get the accommodation for turban and beard way back in the day,” Kalsi said. “This is a new milestone. It shows progress.”

“The Army changed its policy in 2017 to allow waivers for religious accommodation. That came after many, many years of effort. Right now, our focus is to help open doors in the other branches of service,” Kalsi explained.

Sodhi said he was deeply inspired by Kalsi, recalling, “My mother took me to an event at city hall where I met Lieutenant Colonel Kalsi for the first time, and he was in his Army uniform with his turban and beard. That was an amazing day for me because I realized then that I can freely practice my religion and serve my country too.”

Here is to this particular slippery slope having many more people go down it, like Manav Sodhi and others, and the next generation of Sikh-American and other religiously accommodated warriors. We need more good people serving, not less, and religious accommodations that do not interfere with good order and discipline are appropriate to achieve that.

In the words of our friend Burt Likko upon seeing Airman 1st Class Harpreetinder Singh Bajwa:

He looks like an American serviceman to me. Glad we can make room for both his faith and his willingness to serve.