Defenders of the Gold Bikini 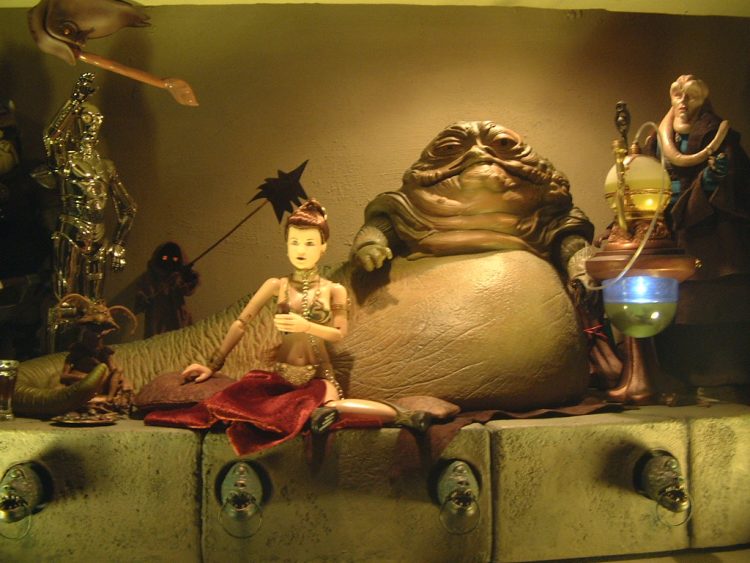 I am a child of the Star Wars generation. Old enough to have seen every movie in the theater, but young enough so that I don’t really remember a world before Star Wars. “A New Hope” came out when I was 7 and I fuzzily remember waiting for an hour in a long long line to watch it in a theater so packed I had to sit on the floor at my parents’ feet.

Let me pause here to tell a story about why Princess Leia is important to women my age, most of all. In the 70s (and probably still), if you were a “certain type” of girl, the other girls didn’t really like you. I wasn’t good at jumprope, my hair was always a mess, I knew the capital of Iceland, and I had a limited sticker collection, so I was perpetually on the outs. While never a tomboy, I felt like I understood boys better and was desperate to play with them, but the boys wouldn’t play with girls. Dilemma. When Star Wars came along, all of a sudden they needed a girl to play with them because they needed someone to play Leia. Unfortunately for me, I was not deemed pretty enough to play Leia, so I was usually relegated to the part of C3PO.

It didn’t matter. I was always Leia at heart.

The magical thing about Leia is that she was in the truest sense of the word, a princess. People use the word “princess” nowadays to mean a lot of negative things, but the real definition of a princess is simply a female person who cares about other people and works tirelessly to help them. She does this because she is born into a leadership position and she recognizes that her position carries with it both privileges and responsibilities. So she tries her best to live up to those expectations, even when it is hard, even when she would have chosen a different path, even when it comes at a great personal cost to herself.

The privileges of princesshood are earned by a life of personal sacrifice. A true princess isn’t a spoiled, pampered brat. Nor is she a superfeminine creampuff. Princesses are tough. They have to be in order to do the job. But they’re still women, still female human beings. Carrie Fisher exemplified a princess; she rocked the part both ways. She was a strong smart chick who actually seemed like she could fire a blaster, leap into a garbage pit, and yet didn’t look out of place all dolled up in an awards ceremony handing out medals, either.

Any girl could be a princess like Princess Leia.  Even if you weren’t born a princess and even if everyone thought you made a much better C3PO. Because being a princess is the things that you do, and the things that you are, deep down inside where nobody else ever sees. Girls love princesses not because they have sparkly satin dresses and long flowing hair, but because they embody positive, traditionally female values – kindness, bravery, cleverness, generosity, self-sacrifice. While great beauty is not a prerequisite, being nicely dressed and well groomed definitely is, because it’s part of the job. But it’s not the most important part, not at all, and being a true princess means that you understand a costume does not a princess make. It’s the brain in your head and the heart in your chest and the will in your soul and the fire in your belly.

One can look at Princess Leia’s gold bikini a couple of different ways. If you take it simply at face value, a young woman was kidnapped by a space slug and forced to wear an outfit to humiliate not only her, but the people who care about her. Princess Leia had to know before going into Jabba’s palace that if things went wrong, they would go wrong in a big way. But she was willing to take the chance of capture, of humiliation, even death, to help someone she cared about. She endured and triumphed. Princess behavior.

On another level, a young woman was hired by Hollywood slugs to play a part in a movie, dressed in skimpy clothes for a few scenes because boys like young women in skimpy clothes and boys buy a lot of movie tickets. Carrie Fisher was willing to wear this costume because she was a professional actress and it was her job to do so. She made some money that then allowed her, in the future, to live comfortably, excel in intellectual pursuits, and raise a beautiful daughter. It also helped the people she worked with to live happy and comfortable lives. Princess behavior. In life, even if you are a princess, you sometimes have to do things that are less than thrilling to you personally, because you’ve made a commitment to do them. This is a sign not of a poor, helpless victim, but of a strong, brave person who is in charge of their own destiny.

Personally, I love the gold bikini. I find it entirely appropriate to the situation, the movie and the genre. What would have been exploitative is if the filmmakers had Leia wearing that getup when she was fighting on the forest moon of Endor, but she wasn’t. She dressed like a princess and a warrior at all other times. The bikini was a simple way to demonstrate the unfortunate situation that Leia was in and the stakes involved if Luke’s rescue attempt failed. It may have even been a part of the plan, I’ve never been quite clear on that. You can make an argument that she set herself up to be captured as part of Han’s rescue. She may have been in the situation entirely by choice.

Regardless, Jabba was not a nice slug. He was not granting Leia diplomatic immunity. He hadn’t invited her over for tea and conversation. And Tatooine was not a civilized place – they owned slaves there, they kidnapped droids there, they allowed small children to fly pod racers and Sand People were running amok. Leia was in legitimate danger.  Yet at the end of it all – she saves herself USING HER OWN CHAIN. No one saves her. She saves herself. Her boyfriend is blind and useless and her brother is desperately trying to avoid the Sarlacc pit.

It’s symbolism, people! There is plenty of shoddy moviemaking to hate in Star Wars movies, but seriously, the gold bikini  + chain are not the things to focus on. When Leia dispatches Jabba, it is the original girl power moment, it’s totally empowering. She went into Jabba’s compound on her own terms and she left on her own terms. Anybody could fire a blaster, but she strangled a giant space slug with her bare freaking hands. How could you pull off that lovely bit of subtext unless Leia was put into that position to begin with – captured and chained???

Neither Princess Leia nor Carrie Fisher were, ever, for a single solitary moment, diminished by a gold bikini. A costume is just a costume. Women wear costumes for all sorts of reasons. Because we have to or because we want to please other people or because we’re playing a role. Sometimes we even wear costumes because we like to.

A costume doesn’t make a princess, because being a princess is what you do, and who you are, and not an outfit that you temporarily donned 35+ years ago.

This piece originally ran on the atomic feminist blog, December 31, 2016.