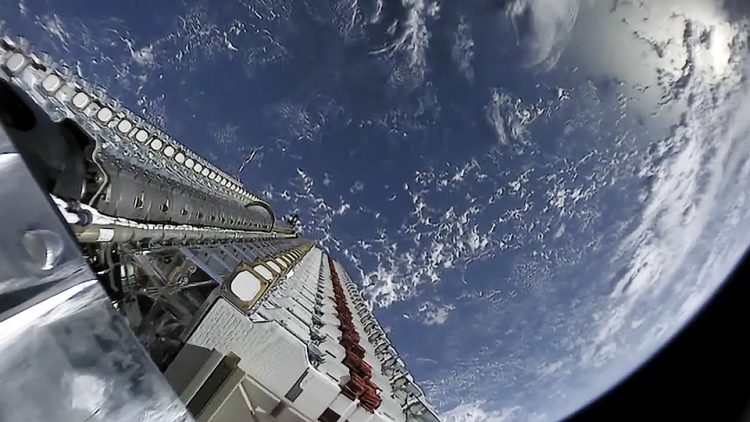 View of the 60 Starlink Satellites from the May 24, 2019 launch. Official public release photo from SpaceX.

Well … not so fast. Satellites are of major concern to astronomers. It is not unusual to see the track of a satellite in an astronomical image. But with roughly 12,000 satellites planned, the potential impact is massive. The wide-field Large Synoptic Survey Telescope would have three of these things in a typical image. Even Hubble, in low Earth orbit and with a tiny field of view, would see a Starlink satellite in roughly one in a thousand images. Dozens or hundreds of these artificial stars could be visible to the naked eye on a given night.

Musk, as is his wont, has responded to these concerns by dismissing them rather cavalierly. I find his reassurances unreassuring. Among other things, he says telescopes should be in space, which is expensive, impossible in some applications and doesn’t actually solve the problem unless you put your space telescopes in very high (and expensive) orbits. Astronomers Alex Parker and Katie Mack respond to his claims. Having a little knowledge in this area, I would say they are likely far closer to the mark than Musk is.

(That’s not to mention the danger of collisions and Kessler syndrome. I’m sure Musk’s people will try very hard to keep their 12,000 satellites from crashing into each other. I’m less sure that other space agencies will be as diligent. And I’m positive random space debris and asteroids won’t be careful at all.)

I have very mixed feelings on Musk. On the one hand, he is laying out a vision of the future — frequent space flight, global internet, missions to Mars — that is bolder than anything we’re seeing from … anyone. Some of the things his companies have created, such as the Tesla and the Falcon rockets, are genuinely impressive. But he sometimes lets his vision get ahead of knowledge and has a tendency to casually dismiss concerns that experts in the field recognize. This is an example.

If Musk’s full system comes on line, this will potentially triple the number of satellite orbiting the earth. The simple fact is that no one has done the kind of careful study needed to figure out the impact of this constellation (least of all other telecom constellations being planned). And we should be doing that, both in terms of the night sky and in terms of the potential for collisions.

[ThTh2] Folks, you don’t need a PhD to do astronomy. Amateurs discover new stuff all the time.

[ThTh3] This is more in Oscar’s domain, but I couldn’t resist this amazing video.

This is the mass damper of the Taipei 101 skyscraper: it has a mass of 728 tons and a diameter of 5.4 meters. It helps stabilize the building in high winds and this is the record movement realized during typhoon Soudelor with 160 km/h winds https://t.co/e0MxA0iOG5 pic.twitter.com/riHgXD4Csr

[ThTh4] The United States has just finished an amazingly wet period of time. Is this related to global warming? Kinda hard to tell. I tend to shy away from the tendency to blame every odd weather phenomenon on global warming. But … we are doing a massive uncontrolled geo-engineering experiment and the effects of it are highly unpredictable.

[ThT5] When I started grad school, only a handful of small galaxies were known to orbit the Milky Way. But bigger telescopes have revealed more and more, changing our understanding of how the Galaxy formed.

I've updated my movie of the discovery history of Milky Way satellite galaxies.

It shows when in the past 100 years which dwarf galaxy was found. The view rotates around the MW (the white circle in the center).
blue: classical sats
red: SDSS discoveries
green: recent discoveries pic.twitter.com/2pp91d5LXH

[ThTh6] The more we find out about gut bacteria, the more important they get.

[ThTh7] Color me very skeptical of the claim that global warming will wipe us out by 2050. This sounds a lot like Ehrlich’s Population Bomb prediction and relies on estimates of global warming that are far in excess of what the IPCC says is the most likely range. I do think, however, that our global warming policy should take into account unlikely but potentially catastrophic scenarios. After all, our foreign policy is often guided by unlikely but potentially catastrophic scenarios.

[ThTh8] 2019 has now seen more measles cases in the US than in any year since 1994, which is when the Clinton Administration passed the Vaccines for Children Program that almost wiped the disease from the country. This is an ongoing national disgrace.

[ThTh9] The renewed interest in UFOs is interesting. But the ones coming out of the government files almost certainly have fairly mundane explanations.