The Unexpected Morality of Game of Thrones 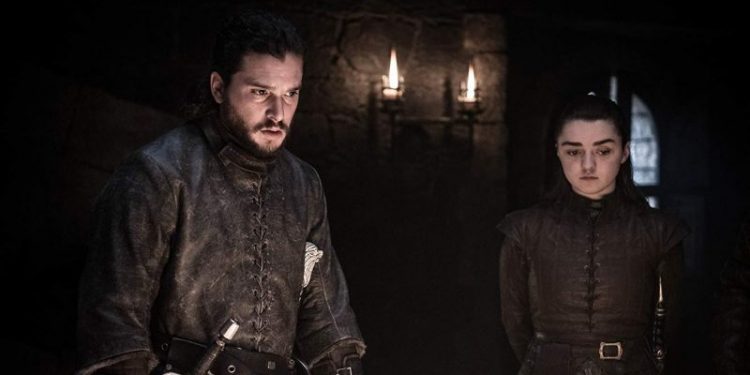 Game of Thrones. It’s right there in the title: politics is a game. A deadly game. This is the selling point of GoT: here is a fantasy show where evil wins, where sin goes unpunished, where the noble-minded who refuse to play the game lose their heads. You win or you die. Valar Morghulis. All men must die. Bad die too, when they lose the game, but it’s not justice – it’s still a game.

And yet, something happened in the last episode. Things started to mean something. Maybe it was just for the convenience of tying up loose ends quickly, maybe it was fan service, maybe it was actually good plotting by the writers (okay, that’s a reach), but for once, there were consequences. There was justice.

The characters had the real-life question in front of them: Would you kill baby Hitler? You have an opportunity to stop someone evil before they commit mass murder: do you assassinate them? The answer, for Varys and Tyrion, when faced with the growing apprehension that Daenerys was turning out to be as bloodthirsty as her father and as likely to listen to reason, turned out to be “Yes, but only when it’s too late”. For Jon Snow, the answer is “Yes, but only after she actually burns down a city”. But he does kill her when it seems very likely that she’s going to kill a continent, and not stop there.

Now, I understand if you hate that the show made Dany evil. I personally think it was fully in character, but I get it, you’ve spent about 84 years cheering on this plucky kid and suddenly whoops, she burns a city down. So you blame the writers who made her do it. That’s fine – so long as you don’t actually justify her actions. She is pure evil when Jon assassinates her. She’s not Hitler, of course. Despite the show’s best attempts to give her a fascist image as she speaks to her troops, it’s a silly comparison. There’s no nationalism or racism in her. Besides, Nazis know they are bad. Dany’s ideology is instead the misplaced fanaticism of the Bolshevik, freeing the masses to death. Imagine if Lenin was stopped and boring, ineffectual, non-genocidal Alexander Kerensky led Russia for a decade or two of enlightened neoliberalism? The history nerds will tell me why I’m wrong about Kerensky. Everyone else will wonder who the heck Kerensky is. It doesn’t matter: he’s a stand in. He’s no evil.

Does it make sense for Bran the Broken to be king? No. Absolutely not. I was literally shouting at my screen when it happened. If you head fake the most unlikely candidate, you aren’t being clever and edgy, you are just being a bad writer. But while Bran makes no sense as king, the people of Westeros could use him. In between cheering on your favorite highborn lords and ladies, and maybe an up-jumped peasant or bastard here or there, there’s a whole continent of poor “smallfolks” who could use a return to normalcy. A ruler who isn’t a warmonger, or a bloodthirsty maniac, or both. A bland inoffensive nobody, so they can plant crops and eat turnips and mutton and those inexplicable chili peppers that have no place in a medieval world.

And what about the man Bran displaced, the true heir to the Targaryen house? Jon Snow is an able ruler. And in the messy power struggles of amoral Westeros, he should have seized the crown. Who even had to know he killed Dany? Nobody else was there. But instead, he gets justice. Although he probably did the right thing, he still committed the crime of regicide (and treason, and kinslaying, and VAWA I suppose, if we’re counting). He himself is unsure he did the right thing. He knows he deserves punishment and accepts his exile. When Jaime killed Aerys (if I remember correctly), Ned Stark encouraged Robert to send Jaime to the wall in punishment. Robert didn’t, because politics. And when Ned was accused of treason, he too was to be sent to the wall, until Joffrey decided to be a little Hitler. But I digress. Jon losing the right to rule and being sent into exile is justice, and the moral thing in the context of the setting.

Of course, the show went around doing this in the clumsiest way possible. Why are the Unsullied holding him prisoner instead of summarily executing him? They just killed a bunch of unarmed prisoners in the streets for being “enemies of the queen”; why would they set the man who killed the queen free? If the reason for sending him to the wall is the Unsullied, you can just pardon him as soon as they leave for Naath and bring him back. And even if we buy that the Night’s Watch still exists, why does Jon Snow, man of honor, after solemnly accepting that he is to return there, merrily ignore his word and march off past the wall? Wouldn’t it have been so much better to just have Jon escape or something, then have King Bran solemnly informing him that “Bran your brother would like to have you rule besides me, but Bran the Broken must mete justice and send you into exile, wherever you choose”?

(Also, how does Sam Tarly leave the NW if it still exists? Oh and, if he’s a Maester, what happens to Gilly? And was he part of the council that picked Bran as a Maester or as a Tarly? None of this makes any sense.)

For Jon himself, you can sense that he feels relief. He was never comfortable in the leadership role he was forced into. He’s earned his right to go back to the only place he was ever happy and find himself a Ygritte-replacement and maybe raise a family. Among the free folk, no one will judge him for being a bastard, or put him on a pedestal for being a lord’s son. Nobody will force him to be a king. There is no king among the free folk. And maybe with the wall broken, the democratic values can trickle down south to the North and eventually to the rest of the continent.

Also going into exile is Arya. Arya leaving Westeros makes sense to me. She is no Dany; she’s still a stone-cold killer who needs an atonement. In the scale of the crimes committed in Westeros, murdering the entire Frey family is not even a top 5, but going into exile as an explorer seems appropriate to me.

The Stark’s homeland, the North, gets its well-deserved independence. And peacefully at that! When the North is free, what is to stop the Iron Islands, Dorne, and all the rest of the kingdoms from seceding? But maybe that is in fact Bran the Broken’s destiny: he is to manage the decline of empire. He is the Clement Attlee. Maybe. Or maybe he’ll get deposed by Bronn in a year or so. It’s the Game of Thrones, after all.

Samuel is a Game of Thrones fan, reporting from law school.