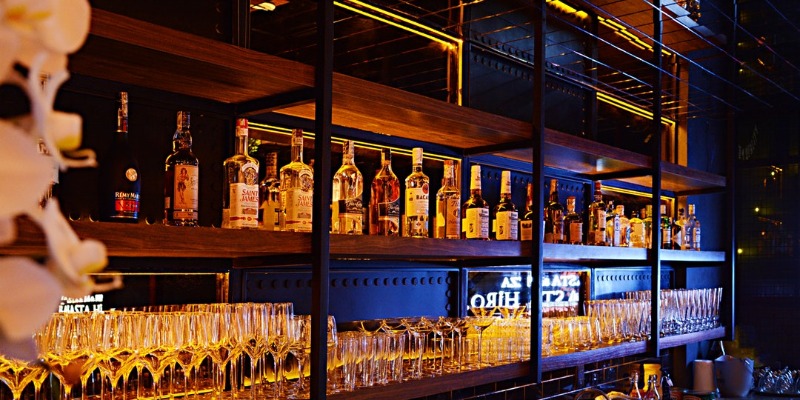 One of my long-time friends recently wrote on this topic and after a few days of musing I thought I’d post something similar.

I’ve decided to stop drinking. Period. Not just a Dry February, not just “holding off to lose weight,” but a Dry For The Rest Of My Life.

I have a complicated relationship with alcohol. I don’t like getting drunk because I hate losing control over myself. But I like beer. Sometimes. Liquor gives me acid reflux, wine give me a headache, but beer is different – it’s something I can tolerate.

I’m not supposed to drink alcohol because of the meds I’m on, but I keep telling myself I can drink as long as I keep it to once a week, or maybe just one or two drinks. My friends drink and I don’t want to be the sober weirdo. I don’t smoke, I don’t do drugs, I don’t really have any other vices. But if I want to socialize it feels like I have to do some drinking – I mean, what else am I going to do, right?

But I occasionally let my drinking get out of control. I’ve been in situations where I’ve had a dude take advantage of my inebriation – not to the point of being assaulted or raped, but being too inebriated to say no. I’ve driven home when I shouldn’t have. And when I drink, I get horrible anxiety attacks that can last a day or more, and I frequently get migraines as well.

I’m not good at saying no, or refusing things, even if they’re not good for me. I don’t like the idea of being rude, even if it’s just setting a necessary boundary. I don’t think it’s peer pressure – no one is forcing me to drink. I’m making that decision for myself. And it’s not the right decision. It’s been one of the worst things for my health.

So I need to stop drinking – not just cutting back, but not drinking at all. Given that my usual weekly socializing is a weekly running group with drinking at the end of the run, and that I work in a profession where mixers and busy season after-parties usually involve copious amounts of alcohol, I know that I’m going to end up being one of few sober people in the crowd. At this point I’m old enough that I don’t care about that. What I do care about is making sure I’m taking care of myself.

Today marks 120 days sober and I don’t know how to do anything anymore. Being the only person in a group who doesn’t drink makes me feel like I’m Doing It Wrong no matter where we are or what we’re doing. In large part it’s because drinking is a very normalized adult activity, and that’s great – I’m not here to shame people for their hobbies or make out anyone who wants to drink into some kind of raging alcoholic with no self control. But even so, it is difficult for non-drinkers or sober people (that is, people who have decided to stop drinking alcohol) to feel normal because it is so normalized to be a drinker.

Deciding on sobriety was one of the most important steps in my self-care journey. I didn’t come from a family of alcoholics, and I didn’t grow up with an alcohol problem that got worse. I came to an alcohol problem late in life, after I finished grad school and figured that I was an adult who could finally let it all out and party hard as long as I did my job and paid bills. As with most, I didn’t think drinking was a problem until it was a problem, and there was no way that “taking it easy” or “taking a break” was going to work for me because I’d been down those reads before. I figured it would be easy to quit drinking because I was already tired of wasting time recovering from hangovers and being too drunk to function. I was also pretty sure that I would have zero issues with peer pressure because I’m over 35 and adults are definitely immune to peer pressure.

When you get past 30, the peer pressure becomes less overt. It’s not like a college kegger or sneaking beers at your friend’s house where someone’s handing you a beer and saying, “Drink up! You don’t want to be a loser, do you?” The peer pressure comes more from not wanting to seem like a buzzkill or an odd one out as people start questioning your decisions.

Are you pregnant? Did you get a DUI and have to go through a program? Is this a religious thing – did you give up alcohol for lent? Did you join a cult? Are you trying to lose weight? Have you tried just cutting back? What do you even do for fun now? Can you be around alcohol anymore?

I also get a lot of people asking me if they’re still allowed to drink. I’m not the booze police – you don’t have to stop drinking just because I’m there. Seeing booze isn’t going to ruin my sobriety, much like seeing a steak isn’t going to ruin veganism for me. I also hear a lot of comments like, “I don’t know what I would do if I couldn’t have [beer/wine/gin/whatever],” which is actually borderline alcoholic, but I don’t think people mean it that way. (I hope they don’t, because it can be scary to have that kind of physical reliance on alcohol.) And honestly, I kind of don’t know what to do either.

If you look at any Mother’s Day display these days you’ll see more and more gifts with coffee and wine themes. “Not before my coffee!” or “Is it wine o’clock yet?” on shirts, bags, cups, mugs, lapel pins, pillows, decanters…. Moms using wine as a means of dealing with the stress and pressure of motherhood is both a cute meme and an expectation. I’ve been met with confused stares when telling people that no, I don’t actually have Wine Thirty at my house when my 6-year-old goes to bed. I don’t need wine to make it through homework nights, or parent-teacher conferences. But that’s normalized for moms, so when I show up and I’m not asking for wine or beer at other mom events I feel like the odd one out.

I’ve always been a voracious reader, and I write, and I play video games. But I’m also a high anxiety person trying to manage anxiety and depression while also managing a family and a high-stress job, and alcohol gave me a crutch for putting a lid on all the scary thoughts in my head. While I was drinking it was great – no anxiety! no depression! I’m almost good at socializing! everything is awesome! When the hangover came, though, the anxiety could be almost uncontrollable. So now I, a sober person, am having to re-learn how to navigate life without that crutch. It was a dangerous crutch, to be sure, because alcohol is contraindicated with nearly every psychiatric drug and adding alcohol on top of medication can be ruinous for your liver and kidneys, both of which you need if you want to live.

I have zero regrets about being sober, but the peer pressure is still there and it can be a struggle. It feels as though people have just noticed an extra arm jutting out of my shoulder and they can’t stop asking me about it. And it feels weird trying to justify it to other people when I’m telling myself that I couldn’t care less about peer pressure, but then also worrying about whether or not people are going to think I belong in their space. It’s the same space I’ve always been in, but now that I’m sober it feels as though people are suspicious of me. Like I’ve come back from a long vacation and my mob friends are trying to decide if I’ve become an informant. It’s hard trying to re-navigate these spaces and reassert my place, more so when I don’t have the filter of alcohol to help me ignore the sense of disconnect that comes with having social anxiety.

The bottle is always there in the corner of my mind as an option, but I don’t feel like it’s hovering over me as a constant sense of temptation. It’s a struggle to figure out where I belong – or rather, where people won’t question my belonging – now that I’m sober. On the plus side, I got a lot of good practice at this when I was pregnant and dealt with the barrage of questions on every aspect of my life and how I was going to deal with having a baby. I just didn’t figure on sobriety being a controversial life choice.