The Silence of the Joe 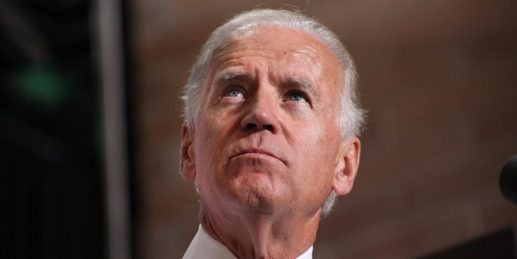 The last few days — at least in the commentariat — have been dominated by Robert Mueller, William Barr, President Trump and all things related. With Mueller making his first, and he insists only, public statement regarding his special counsel investigation there was a rash of coverage, and many of two-dozen Democratic presidential candidates took the chance to find microphones and call for impeachment. The strategy is clear enough; all those running who are mired in single-digit polling need something, anything, to try and get some attention. Calling for Trump’s political head has the dual purpose of doing that, and keeping the donor base fired up and writing checks.

But tellingly, the candidate who is not only leading, but currently lapping, the field said virtually nothing all week.

Joe Biden’s polling bounce has leveled off a bit, as is expected, but even if it settles somewhere in the 35-40% range he has a commanding lead at the moment. So much so, that no other candidate has improved their name recognition by more than 3 points, a sobering metric for the gaggle of also-rans hoping to last past the summer. Much like the waiting times at the top of Mt. Everest that is tragically killing climbers, there just isn’t enough air (or in this case fundraising and attention) in the political realm for all those candidates on the narrow peak of national viability.

Thus, many of the also-rans are now jumping on currently trending news and crusading for impeachment. The problem is a) when a bunch of them do it at once it just looks like a herd changing directions and b) it isn’t going to help them.

If there is such a thing as a Mendoza line in issue polling, 60/40 probably is it. And that is where the public is on impeachment right now. Only 37% want impeachment proceedings to begin. Joe Biden might be gaffe prone but he can read polls, and other than a lukewarm statement issued by his campaign that amounts to “Whatever Nancy Pelosi thinks, I have a campaign to see to” Joe Biden has wisely steered clear of the “I” word all together.

So far Biden has proven doubters, myself included, wrong. Though there hasn’t been any campaigning of importance done yet, and with the first debates looming, the former VP’s massive post-announcement bounce did serve to put into perspective the rest of the field. Bernie Sanders’ numbers have flattened since he entered the race, and no one else is breaking double digits. Mayor Pete enjoyed some media coverage but his numbers haven’t climbed in any meaningful way. Kamala Harris slid back a bit and has struggled to gain anything in numbers or attention back. Elizabeth Warren has managed to pop up to a third place and flirted with double digits here and there, but that is far back of the two leading candidates.

And, sorry folks, the rest just don’t really matter at this point. Frankly when you have a half dozen candidates polling at roughly the same number as you and me it just isn’t worth our time discussing.

Which makes the silence of Joe Biden on the news cycle of the week all the more telling. His most public statement of the week came on Thursday when he weighed in on the USS McCain kerfluffle and happily waved the late John McCain’s name in criticizing President Trump’s long-running animosity towards the same. But nothing about the “I” word that others who are not strongly positioned are using. Trump the unfit president is the theme of the Biden 2020 campaign, and they realize that Trump the martyr will be harder to defeat. As does Trump, who once again is attacking Mueller personally along with his supporters and surrogates, because the truth is Trump wants that narrative to run on. A base that is aggrieved is a motivated one, and being the aggrieved-in-chief has worked well for the president and will continue to.

The 2020 campaign is a referendum on Trump. That referendum is going to be largely dictated by things like Trump himself, the economy, and probably a few other factors we do not yet know about as events unfold. But public opinion on the Russian investigation and impeachment is pretty well wholly formed, and anyone selling the idea that it will change dramatically is fooling themselves, or more probably doing just that — selling something.

Joe Biden has been rightly criticized for gaffes and judgement errors over the years, including by me. Credit where it’s due: by staying quiet and on task Team Biden has played this week perfectly, to their advantage, and wisely.