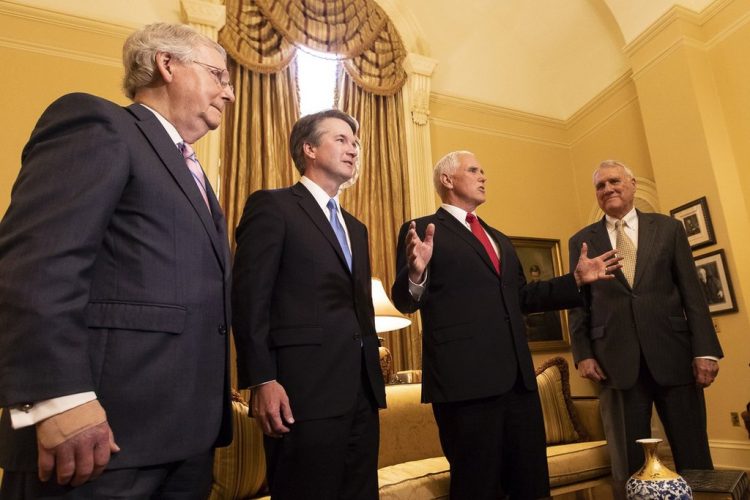 This will go over well:

Senate Majority Leader Mitch McConnell said Tuesday if a Supreme Court vacancy occurs during next year’s presidential election, he would work to confirm a nominee appointed by President Donald Trump.

That’s a move that is in sharp contrast to his decision to block President Barack Obama’s nominee to the high court following the death of Justice Antonin Scalia in February 2016.

At the time, he cited the right of the voters in the presidential election to decide whether a Democrat or a Republican would fill that opening, a move that infuriated Democrats.

Speaking at a Paducah Chamber of Commerce luncheon in Kentucky, McConnell was asked by an attendee, “Should a Supreme Court justice die next year, what will your position be on filling that spot?”

The leader took a long sip of what appeared to be iced tea before announcing with a smile, “Oh, we’d fill it,” triggering loud laughter from the audience.

David Popp, a spokesman for McConnell, said the difference between now and three years ago, when McConnell famously blocked Judge Merrick Garland’s ascension to the Supreme Court, is that at that time the White House was controlled by a Democrat and the Senate by Republicans. This time, both are controlled by the GOP.

Nothing fires up the political-industrial complex like a SCOTUS fight, and the enduring legacy of the Merrick Garland nomination non-vote will continue to be brought up nearly every time we have one. Something Mitch McConnell is perfectly, purposefully, aware of:

McConnell has made the confirmation of federal judges a key part of his Senate legacy and a highlight of his stump speech in Kentucky where he is running for a seventh term.

At the lunch, he said overhauling the judiciary is the best way to have a “long-lasting positive impact” because “everything else changes.”

“I remember during the tax bill, people were agonizing over whether one part of the tax bill was permanent or not. I said, ‘Look, the only way the tax bill is permanent depends on the next election,’ ” McConnell said. “Because people have different views about taxes in the two parties and they approach it differently when they get in power.”

“What can’t be undone is a life time appointment to a young man or woman who believes in the quaint notion that the job of the judge is to follow the law,” he said. “That’s the most important thing we’ve done in the country, which cannot be undone.”

The Senate Majority Leader has set to that task with as close to efficiency as the US Senate can muster. While folks focus on the Supreme Court, there is still only one of them, hearing somewhere in the neighborhood of 80 or so cases a year on average. There are 13 US Courts of Appeals and 94 District Courts, and they handle tens of thousands of cases every year. With the logjam at SCOTUS, they are often the last word on far-ranging and important legal matters. The political powers that be know of course knows this, and while Democrats taking The House in the mid-term elections was dominating headlines, and the presidential elections will through next year, those elections will always be coming and going while the judicial appointments continue to serve for long stretches. With the Senate math being an uphill climb for Democrats in 2020, even if they take the White House the issue of judicial appointments is not going away anytime soon as a political warzone.