Roundup, Pseudoscience and the Need for Villains

Last week, Monsanto, makers of the Glyphosate-based herbicide (GBH) Roundup were hit with a third straight court loss. A jury found that the use of Roundup had caused non-Hodgkins Lymphoma (NHL) in a couple. They awarded $55 million in compensatory damage and a whopping $2 billion in punitive damages. I’ll leave people with more expertise than me to comment on the legal issues, which seem to revolve more about whether Monsanto failed to warn people of the potential cancer risk. But I did want to address a scientific one.

You see … there’s no evidence that GBHs cause cancer, least of all NHL. The World Health Organization has concluded it poses no measurable cancer risk. European, German, Canadian, US and Australian regulatory agencies have all concluded, based on hundreds of studies, that it poses no measurable cancer risk. Only one organization — the International Agency for Research on Cancer — has identified it as a “probable” carcinogen in a 2015 study. This caused a lot of agencies to re-evaluate the evidence. But the IARC’s conclusion was based on a small number of studies — mostly animal studies or agricultural workers who had endured massive exposure. Subsequent studies have failed to confirm this link. Moreover, the IARC’s rep is … well, they think cell phones cause cancer, too. And they’ve been accused of having conflicts of interest with tort firms (the veracity of which I’m finding almost impossible to evaluate).

Nevertheless, apparently one agency is enough for a jury to dole out a ten figure sum. But in reading through the coverage of the cases, I discovered something astonishing. David Bernstein goes through the judge’s decision on a previous case and here is how he defends the trial and verdict.

In performing his differential diagnosis, Dr. Nabhan explained that because Mr. Johnson was much younger than the average patient who developed the disease this raised a “red flag” that his cancer is not likely to be idiopathic and more likely to be caused by an exposure. Tr. 2842:23¬2844:19. Dr. Nabhan considered the known risk factors and causes of NHL including age, race, immunosuppressant therapies, autoimmune diseases, skin conditions, occupation, occupational exposures and viruses. Id. at 2842-2852. Dr. Nabhan opined that sun exposure, tobacco, and alcohol are not known causes of NHL and could therefore be excluded. Id. at 2852-2853. After conducting his differential diagnosis, Dr. Nabhan concluded that Mr. Johnson’s only known risk factors were his race (African American) and exposure to GBHs. Tr. 2853:19-23. Dr. Nabhan therefore concluded that the GBHs were the most substantial contributing factor to Mr. Johnson’s NHL. Id. at 2853:24-2854:2.

This is, to put it mildly, nonsense.

The judge confounds two things here — differential diagnosis and differential etiology. Differential diagnoses is a method doctors can use to figure out a patient’s illness based on their symptoms and ruling out causes one by one using a version of Bayesian analysis. It’s a more mathematical approach to the “process of elimination” method of diagnosis you’ve probably experienced if you’ve ever had a mystery ailment. Basically, you are accounting for not only how likely a certain condition is to produce a set of symptoms but how likely that condition is to appear in a patient of that age, gender, risk profile, etc. So while your symptoms may be consistent with lupus, the likelihood that you have it in the first place is so low that other more likely options will be considered first.

But differential etiology is a bit different. It’s trying to figure out the underlying cause of a disease using a similar formalism. But that’s much more murky. Diagnosing diseases is hard enough; figuring out the underlying cause is an order of magnitude more tricky. If you Google differential etiology, you’ll mostly find people disputing its use in court rooms. The reason such a process is questionable are several:

First, you can’t know every possible potential cause of a disease. Given that, it’s quite likely you are missing something. Maybe that potential cause of a disease is small, but maybe it’s big. Suppose you conducted this analysis on a lung cancer patient in the 1930’s. You wouldn’t know that smoking causes lung cancer, so you would attribute it, erroneously, to something else. Let’s say you were diagnosing a lung cancer patient in the 19th century. You wouldn’t know that asbestos was a major risk factor and would erroneously attribute it to something else.

There are literally a couple of dozen factors that have been implicated as possible contributors to NHL — multiple infectious agents, multiple chemicals, multiple genetic conditions. That’s just what we know about. It is very likely that there are other contributors — maybe even major ones — that we don’t know about. The doctor in this case decided that “sun exposure, tobacco, and alcohol” were not known contributors to NHL, even though all three are known carcinogens and you can easily find studies linking tobacco use to NHL (at low levels of significance).

Second, even it were established that GBHs were a carcinogen — and it isn’t — that still doesn’t mean it caused this particular case. You can’t measure effects of carcinogens that precisely unless it’s something like smoking which has a massive, dramatic and well-established connection to lung cancer. Or if the cancer is of a type that is extremely rare and unlikely to occur absent an exposure to a carcinogen. And even then, you can’t be 100% certain. Cancer is caused by damage to the DNA of our cells that causes anomalous cells to appear and grow. Genetic and epigenetic factors can make DNA in certain cells vulnerable to disruption (e.g, the breast cancer gene). Carcinogens can also cause this disruption. But sometime … genes just break down. Sometimes, cancer just happens. 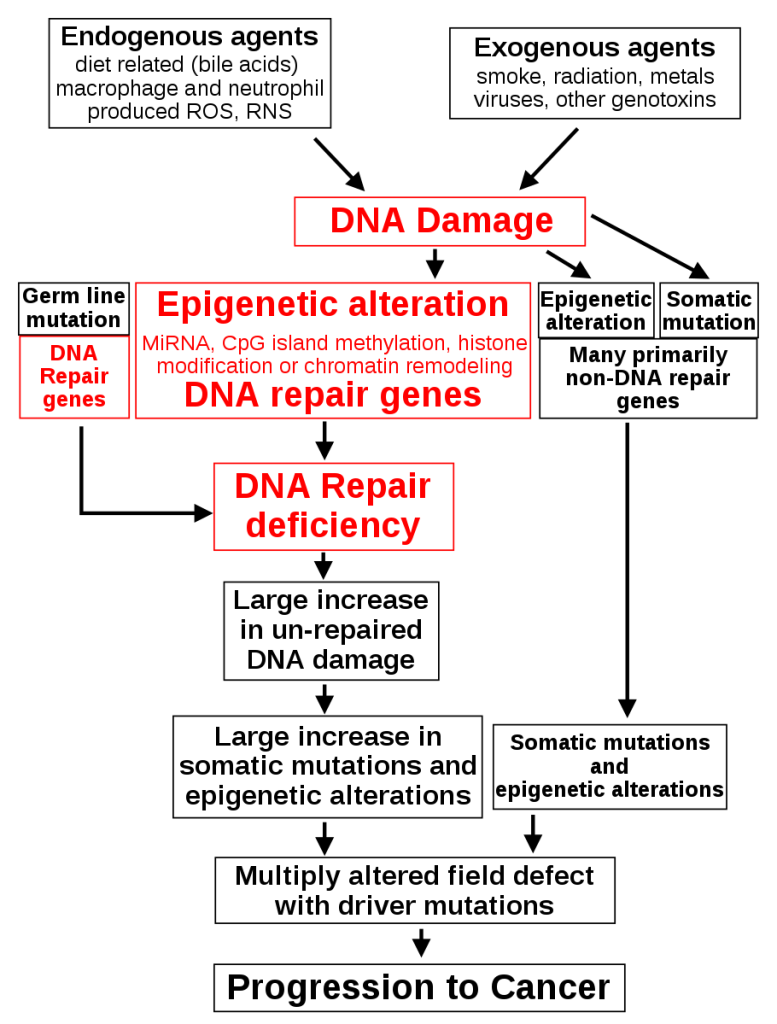 This is why it is so difficult to identify carcinogens with certainty. Because, most of the time, the effect is small and the potential causes many. Only with something truly awful like cigarette smoke does the effect jump out so dramatically.

To wade into that fog of conflicting studies, multiple causes and random chance and claim to have figured out the cause of a specific case of NHL to any level of precision is … absurd. Once more, with feeling: we don’t even know that GBHs are a carcinogen, least of all that they are specific to NHL. Maybe, if we did have a solid connection, you could make a qualified statement about the likelihood. But even then, I would be dubious.

In fact, this analysis goes wrong at the very first step, being based on a particularly common and egregious bit of statistical skullduggery. Nabhan calls it a “red flag” that the plaintiff in the case is much younger than the typical NHL patient. While it true that most NHL patients are older, that doesn’t have any real bearing on this case. Even if the odds of a young person catching NHL are low…someone is going to come up with those odds. Someone always wins the lottery even though the odds of any particular person winning the lottery are small. In fact, as the American Cancer Society notes:

NHL can occur at any age. In fact, it is one of the more common cancers among children, teens, and young adults.

In other words, most NHL patients are old, yes. But that doesn’t mean it’s impossible for a young person to get it. In fact, it’s distressingly common. And those people who are unlucky enough to get at a young age are the ones who are going to show up in a courtroom, believing that something nefarious caused it.

(As an aside — with the caveat that I Am Not A Lawyer — I think this is why something like class action is more appropriate for this sort of thing that individual torts. You can’t establish that one person’s cancer was caused by one thing — even in the case of cigarette smoking. You could, however, with a large enough group of people, establish that it is likely that a certain number of cases were caused by it and levy judgement appropriately.)

About a year ago, I wrote about Radley Balko’s book on junk science in criminal law. This is an example of junk science in civil law. “Differential etiology” sounds sciency. It may have even employ some of the complex equations used in differential diagnosis. But quacking like a duck doesn’t make you a duck. As Bernstein so rightly notes:

This isn’t science, it’s witchcraft, and the testimony should have been excluded entirely under the Sargon precedent in California, which bars courts from admitting “speculative” expert testimony. To call Nabhan’s causation testimony “speculative” would be generous. And note again that the above excerpt is the judge explaining why the testimony was sufficient to support a verdict, not a hostile account of Nabhan’s testimony.

Most cases of NHL are idiopathic — arising either spontaneously or from a combination of factors too complex to untangle. That hasn’t stopped people from trying to harvest NHL cases into big judgements or settlements because…well…we don’t like that. We don’t like the idea that someone can get cancer for no reason. Human beings have a deep need to believe that medical ailments are a result of some kind of failing or malice — from the ancients who believed leprosy was caused by sin to modern times where we want to believe that any death before the age of 80 is a result of a bad lifestyle or nefarious corporate greed.

Every moment of your life you roll dice against death. Certain things — smoking, obesity, exposure to carcinogens — load the dice in death’s favor. Other things — exercise, good genes, attentive healthcare — load them in yours. But the dice never stop rolling. And sometimes, they’re unfair. Sometimes someone who smokes like a chimney, eats like a pig and exercises like a futon lives to be a hundred. And sometimes someone who does everything right gets cancer at thirty.

It’s not fair; it’s not right; but it’s reality. And no amount of pseudo-scientific medical-sounding gibberish is going to change it.

Returning to the legal cases, I don’t know that the science really mattered in any real sense. I often feel that “science” in these cases is less about providing illumination into the complex mechanism of cancer and more about getting the case in front of a jury and providing them a plausible excuse to side with a sympathetic plaintiff (much like John Edward’s pseudo-scientific theories concerning the cause of cerebral palsy twenty years ago). Differential etiology may be garbage but it sounds just plausible enough and just sciency enough that a judge and a jury will give in to their natural inclination to punish a big corporation for someone’s very real suffering.

But don’t let anyone tell you that these cases prove that Roundup causes cancer. Hundreds of scientific studies have failed to find such a connection. That is what matters. Pseudoscience and our profound need to find someone to blame for the cruel randomness of life may win trials; but it’s not reality.