Write Your Own Ending 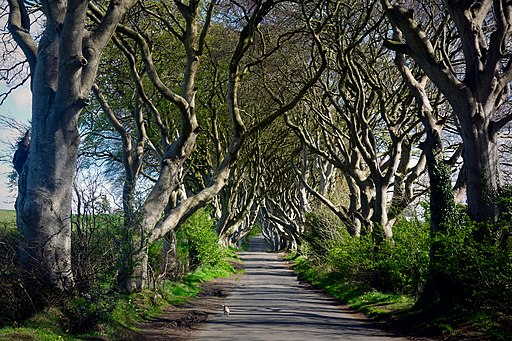 So you hated the end of Game of Thrones?

I have a solution.

One time I liked this show called Supernatural.  I watched it for a huge part of my life – 10 whole years – long enough so it became part of the family.  I jokingly refer to Supernatural star Jared Padalecki as my celebrity son, since between his appearances on Gilmore Girls and Supernatural, he’s been a regular part of our family’s lives long enough for me to have given birth to him and raised him to adulthood.

Supernatural kind of maybe went on too long, or maybe it was more that I wanted it to go someplace darker or deeper than the people who were making it wanted it to go.  Either way, I lost interest.  I wrote about it way back in 2017 in a little piece called you know what I did last summer. 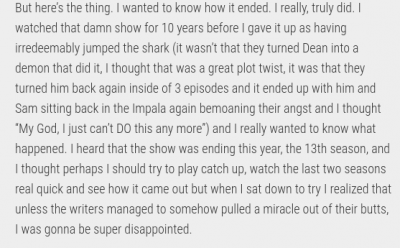 As it turned out, Supernatural actually WASN’T ending that year.  It IS ending this year though.

Ugh this makes me so sad I can’t even watch it.

Brief aside – In a world full of celebrities who don’t care a fig for the content they create, who treat their fans like jokes, who argue and backstab and undermine not only each other but the very program that brings home their collective baconses, the Supernatural guys are a little taste of pure unadulterated awesomesauce.

Looking at that video, I’m a little ashamed to admit I never went back and finished watching the show.  There’s so much good stuff out there to watch nowadays and I just didn’t want to see something I love become something I watch only because it’s on my to-do list.  I have enough on my to-do list already.

What I did instead was that I wrote my own personal ending.  A fan fiction, kind of. A little weird, I know, but then again writing is a strange pursuit.  Sometimes as a writer an idea takes hold of your brain and won’t let go, and my ending to Supernatural was one of those things.  It had claws too.  It meant business.

At the time I first wrote about it, a couple people wanted to read the fruits of my labor, and I started posting my fan fiction in increments on my blog.  But as happens sometimes with writing, I hit a snag that I didn’t quite see how to fix, and then I had some personal issues arise that prevented me from writing anything for a while (let alone totally self-indulgent and pointless things.)  But when I saw Supernatural was really, truly ending for reals this time, I thought about my little project again and I realized I wanted to see it through.  So finding myself desperately sick of politics the past couple weeks and in need of something to recharge my creative batteries, I resolved to finish writing it.

So I did.  And I feel pretty darn good about how it came out.  If you’d like to read Supernatural: Manic Pixie God Girl swing by sometime when you’re bored and check it out.

Writing a fan fic ending was an entirely positive experience.  I’m walking away from a show that was important to me for a huge chunk of my life and I am fully satisfied with how it came out – a rare occurrence.  It’s actually not the first time I’ve envisioned my own plot twist, either.  Not even the first time with Supernatural.  Remember this?

I didn’t like how this all went down.  It was pretty sappy.  Too sappy.  At the end of this epic 5 season-long 3-D chess match between angels and Lucifer with the Winchesters caught in the middle of it, two guys falling in a hole because Sam got emotional over a toy soldier didn’t do it for me.  I thought what should’ve happened is that while Adam and Sam fought, Dean should have driven the car into them and knocked them both in.  That felt way better to me, and weirdly, I thought about it so hard that in my brain I eventually came to remember it that way.  I rewatched the show a few years later and was stunned to realize that it didn’t actually happen the way I thought it had.

Even more than Supernatural, I love Buffy the Vampire Slayer.  But this scene where Xander talks down a murderous magically-addicted Willow totally bugged the heck out of me.  So, so sappy.  And it had been so long since Willow and Xander had hung out in the show that even I, the original Buffy superfan, had forgotten they were supposedly besties.

My son came up with an utterly insane and fantastical notion that Giles should have revealed that he was actually an all-powerful wizard himself, defeated Willow in a massive magical showdown, and then explained that in his Ripper days, he had been addicted to magic himself.  He couldn’t chance using magic ever again because it was too addictive.  Then Giles and Willow could have left Sunnydale together to seek solitude to battle their mutual addiction instead of leaving Sunnydale for much more contrived reasons.  It made way more sense for their characters, would have fleshed out the backstory of Giles in a mindblowing way (he could have destroyed any of the Big Bads they came across, he just couldn’t take the chance that it would turn him into a Big Bad himself!) and it was far was more exciting and more sensible than Xander getting all emotional for the sake of his “best friend” who he hadn’t really seemed all that chummy with for at least the past few seasons.  So that’s the way I’ve chosen to remember it.

Some of you may possibly recall my take on the true end of the saga of Ferris Bueller.

And don’t even get me started on Lost.

But maybe you don’t agree.  Maybe you loved the way Lost ended, and that’s cool.  Maybe you enjoyed Xander’s monologue and had your heartstrings plucked by Sam and his toy soldier.  Awesome.  If you like it, great.  If you don’t, there’s nothing wrong, nothing at all, with doing a little mental rewrite, is all I’m saying.

800,000 people recently signed a petition demanding the entire 8th season of Game of Thrones be remade.  I laughed when I read it but honestly, I feel those people!  It’s uberfrustrating when your expectations not only are not surpassed (is there anything better as a fan than when your expectations are surpassed?) but are demolished so spectacularly it feels like the writers are basically telling you to eff off.

Or as one meme puts it: 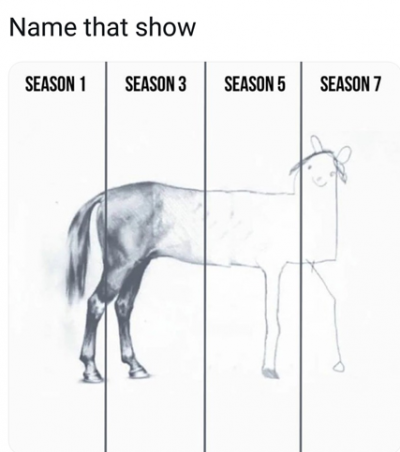 We live in a crazy amazing time to be a writer.  For the first time really in ever, people who scribble stuff – even amateurs like me who write just for fun and also because the words beat me up if I don’t let them escape – have the ability to get said scribbles into the hands of lots of people who, for some inexplicable reason, want to read them. Capitalize on that!  If you have a great idea there are tons of people out there who want to read it, who may even like what you write better than what the “official writers” came up with.  Plus, it’s FUN.  I had more fun writing my Supernatural fan fiction than I ever have had writing anything and that is saying a lot.  And I got to walk away happy with how the story ended, instead of seething over it forevermore.  (#&^$^%$%$^%^ Lost!!!!  ok I just punched the wall, now my hand hurts)  I really really urge you…yes, you!  You know who you are, you person who has a superduperly fabulous plot for your favorite show and it just kills you inside knowing you’ll never get to see it happen – to give fan fictioning a whirl.  You may like it.  Even if you’re a Very Serious Writer, remember, all work and no play makes Jack a dull boy.

Hmm…Maybe if only The Shining‘s Jack Torrance had written a fan fiction to entertain himself during those long dark days when he was cooped up for the winter at The Overlook Hotel, a lot of unpleasantness could surely have been avoided.  There’s a story in that somewhere.

(Now as for what to do when you realize that in 20 years of being a full time Very Serious Writer, the best thing you ever wrote was a Supernatural fan fic – I’m still wrangling with that.)