A Song of Tolling Bells and War Crimes

For those of you that haven’t watched this week’s episode of Game of Thrones, I don’t know why you’re reading this. As for the rest of you, you all no doubt have strong opinions about House Targaryen’s assault on King’s Landing this week and what it says about 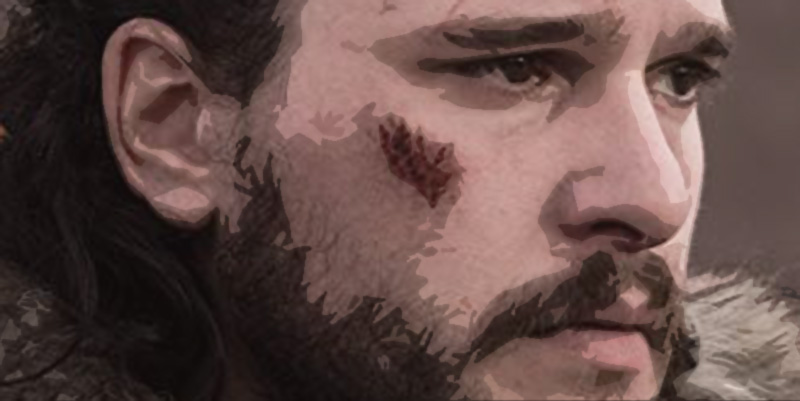 Targaryen, the First of Her Name. The more interesting question, though, is what it says about Jon Snow.

First, the background. At the beginning of the episode, Queen Daenerys’s forces have besieged the Lannister capitol, King’s Landing. Daenerys orders an assault on the city, with Jon Snow and Grey Worm commanding her land forces while she attacks personally from the air aboard her dragon. The battle plan is wildly successful. Lannister anti-aircraft fire is totally ineffective, so Dany is able to torch the Greyjoy fleet in harbor, neutralize the Lannister defenders on the city walls, and destroy the main gate and the Golden Company mercenaries guarding it. With the city’s outer defenses in ruins, the Targaryen ground forces enter the city without any real difficulty. Seeing that their situation is hopeless, the remaining Lannister soldiers throw down their swords.

It is at this point, when the Lannister ability to effectively resist has failed, that the episode reaches its big decisions. Daenerys, overcome by anger and grief, begins to attack civilians and Lannister soldiers that have already surrendered. Grey Worm follows suit and the Targaryen army sacks the city. They kill soldiers and noncombatants alike, including children, and many of them rape the women of the now-defenseless city.

The notable exception to all of this is Jon Snow. He is with the Targaryen forces in the city when the sack begins but he takes no part in the sack. He even kills one of the men under his command to save a civilian from rape. He does not, however, give any kind of order to stop. So at the end of the episode, we’re left with a protagonist whose hands are individually clean at the head of an army that just killed thousands of innocent civilians without any obvious military necessity or justification. If Jon were to fall into the hands of an unfriendly war crimes tribunal, does he have a good defense?

Fortunately, the judicial system and the uniform code of military justice have some thoughts on the matter. US military law recognizes something called the Yamashita Doctrine, under which commanding officers are held responsible for crimes committed by their subordinates even when they did not directly order the bad acts of the people under them. It is named after Japanese general Tomoyuki Yamashita, the officer in command of Japanese land forces in the Philippines when the islands were recaptured by Allied forces in World War II. Yamashita was tried after the war for atrocities committed during the course of that battle. In his defense, he argued that it would be unjust to hold him accountable for the actions of his troops because he did not have the ability to give them orders to the contrary. The American attack had systematically and deliberately destroyed the Japanese command and control network so that the soldiers under his command were disorganized, divided, and impossible to control.

Jon Snow might have an argument along the same lines. In a world without radio, commands can only be carried as far as the sound of the commander’s voice, the sound of a musician, or the view of a flag corps. In a warren of city streets, it would take hours if not days to even find all of his command. Indeed, the chaos and intrinsic danger of besieging a city gave rise to a common pre-modern norm of warfare that a city which did not surrender to an attacking army could expect no mercy if the attacker was successful. Beyond that, Jon’s superior officer was busy flying around the city immolating everything that moved. An attempt to prevent his subordinates from committing war crimes would have been unlikely to succeed. His queen might have considered it insubordination or even treason, and she had an advisor burned alive earlier in the episode. What could Jon realistically have done about what was happening?

The trouble for Jon is that Yamashita doesn’t have a doctrine named after him because he won his case. The Supreme Court ruled against him; he was executed in 1946. And Jon’s defense here shows a lack of imagination. He knew full well that Dany was contemplating an attack upon the civilian population of King’s Landing. He could have ordered his subordinate officers to maintain discipline before the battle started. He could have instructed them that they have a responsibility to disobey an immoral order and to pass that instruction along to the rank and file. He could have taken steps to avoid complicity in a war crime. Indeed, the laws of war say that he was obligated to take them. But despite all of Jon’s decency and honor, he didn’t. Jon had better hope his side wins the war.

Don Zeko is the paper-thin pseudonym of a public defender living in North Carolina. Professional interests include criminal law, trial advocacy, and evidence, while unprofessional interests include overthinking pop culture, eagerly awaiting new fantasy novels, holding strong opinions about board games, and trying to convince the two sides of the barbeque wars to bury the hatchet. I also tweet at @Don_Zeko