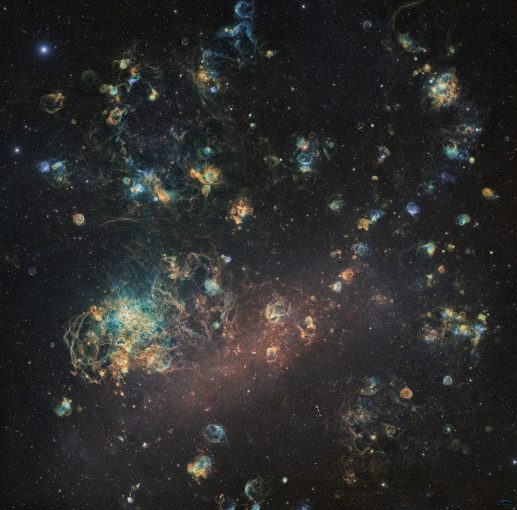 [ThTh1] Two of my favorite objects in the sky are the Magellanic Clouds. They are visible to the naked eye (albeit only in the Southern Hemisphere). A group of amateurs recently took an incredible deep image of the Large Magellanic Cloud. Phil Plait has the details.

[ThTh2] You would think, after studying the Sun since literally the dawn of civilization, it wouldn’t surprise us. You would be wrong. Fermi, with its gamma-ray-sensitive eyes, is discovering all kinds of things about the high-energy processes in the upper regions of the solar atmosphere.

[ThTh3] The Whirlpool Galaxy is another of my personal favorites. Here’s a flyby of this amazing galaxy.

Virtual Flyby of the Whirlpool Galaxy

[ThTh4] One of the hills I will die is on is that a climate policy that doesn’t include nuclear power is not a serious climate policy. You need something to back up renewables and if it ain’t nuclear, it’s fossil. Countries and states that have shut down nuclear power plants have seen their greenhouse gas emissions rise. But isn’t nuclear power dangerous? Yes, but not that dangerous. Recent re-analysis of the data suggests past nuclear accident were far less deadly than feared. Even with three nuclear disasters, the number of casualties is tiny. And it is especially tiny when compared to the environmental and human cost associated with fossil fuels.

[ThTh5] I’ll have to tell the wife to get this for my birthday.

What an awesome artifact, a ring that folds out to an astronomical sphere! 16th cent. https://t.co/xtGzFB1J40

[ThTh6] I’ve mentioned it before, but the dangers we are facing from antifungal-resistant fungi and antibiotic resistant bacteria are very real. These could prove to be the biggest medical challenges of our century. The good news is that a lot of experts think these problems can be solved with just a few billion in research funds and some changes in how we deploy existing medicines.

[ThTh7] Last time, I talked about finding one of the rarest molecules in the universe. This week, it’s one of the rarest nuclear reactions. An experiment in Italy is trying to detect dark matter — the invisible substance that dominates the mass budget of the universe. They haven’t found it yet. But they did detect the decay of Xenon 124. How often does that happen? Once every 18 sextillion years. A sextillion is a one followed by 21 zeros. That’s a billion times the age of the universe.

[ThTh8] One of the issues that’s been getting some attention lately is how our medical practices tend to be oriented around a male model of health. For example, Ambien dosages were set based on how men metabolized the medicine. But women don’t metabolize it as fast, which meant they were inadvertently overdosing. A longtime reader pointed one of the reasons for this: a great deal of medical research uses prisoners, who are overwhelming male.