Hang tough on China, President @realDonaldTrump. Don’t back down.

Strength is the only way to win with China. https://t.co/pZqeR346ov

The above obsequious tweet from Senator Schumer so befuddled Resistance tweeters yesterday that they are earnestly trying to convince themselves that it is just incredibly clever sarcasm from the 68-year-old senator whose sense of irony was simply too refined for the #MAGA set.

But this is classic Schumer. He agrees with Trump on this core policy issue. Since he’s a Democrat, he has to at least pretend to disagree with Trump some of the time though. In such cases,  he does so from the right, trying to claim that Trump is being soft on China:

Trump Asia trip a flop: POTUS acts like a lap dog to Xi and China, but talks tough to our friends in Southeast Asia. Presidency by misadventure.

This extends to two important Democratic presidential candidates, neither of whom should be allowed to on the face of the 2020 presidential ticket.

Bernie Sanders and Elizabeth Warren share Trump’s trade agenda verbatim. The three of them argue that trade with China and other countries should be drastically curtailed if not stopped altogether. Warren, if anything, attacks Trump from the right, expressing concern that by negotiating with Canada at the same time with China, Trump isn’t being strong enough in fighting China:

[Trump] is right that we have a problem with China. What he hasn’t seemed to figure out is what’s the strategy to deal with it. So for example, if you wanted to push back against China, your first move would not be to pick a fight with Canada and our other allies. We have a lot of trading partners who are good allies, and we should make sure that … we are working with our allies. That’s what makes us stronger internationally. And many of our allies are just as worried about China as we are. We need to be working with them as we go forward.

When Trump unveiled is plan for $50 billion of tariffs on Americans purchasing Chinese goods, she gave what practically amounts to a glowing endorsement, considering that she is running against Trump for the presidency:

I am not afraid of tariffs..We need a comprehensive rethinking of our trade policy…

What I’d like to see us do is rethink all of our trade policy. And, I have to say, when President Trump says he’s putting tariffs on the table, I think tariffs are one part of reworking our trade policy overall.

Warren didn’t need Trump’s incitement. During the Obama administration, Warren reveled in her role as Obama’s spoiler with respect to free trade:

“The administration says I’m wrong — that there’s nothing to worry about,” she said in a blog post. “They say the deal is nearly done, and they are making a lot of promises about how the deal will affect workers, the environment, and human rights. Promises — but people like you can’t see the actual deal.” She declined an interview.

Warren proudly voted against Obama’s trade representative, one of only four senators to do so against 93 others.

When it comes to immigration policy, Bernie Sanders has famously called open borders a Koch-brothers proposal.

Trump says “our country is full.” What does Bernie Sanders say when asked about open borders?

I think what we need is comprehensive immigration reform. That is not simply—You’re quite right—if your point is you open the borders, my God, you know, there’s a lot of poverty in this world and you’re going to have people from all over the world, and I don’t think that’s something we can do at this point. Can’t do it.

It’s understandable to oppose open borders as a policy, but Sanders goes far beyond that. His rhetoric describes poverty and “people from all over the world” as akin to an infections disease that will enter if we let our guard down. While his language is rated G, his sentiment is certainly akin to someone who might use the phrase “shithole countries.”

Sanders complains about “Mexican workers making 25 cents per hour.” (I am 80% sure this is a statistic he made up.) He does not complain for their sake though. He complains because he doesn’t want those workers or the products they might produce making way to the United States where he or the people he actually cares about might have to deal with them..

Sanders’s views on immigration are roughly identical to Trump save language differences. Sanders likes the words “comprehensive immigration reform.” He does not share Trump’s preference for a religious test. Despite their similarities though, Sanders has to claim to be against Republicans and the right, so he lies about what they want:

[They] would love an open-border policy — bring in all kinds of people work for $2 to $3 an hour. That would be great for them. I don’t believe in that

If you pay the slightest bit of attention to Donald Trump, you will know he is not a fan of bringing in people who would work for $2 to $3 per hour. Trump is trying to kick out workers as fast as he can. Sanders, however, needs to convince you that this is what Trump and Republicans actually want so that he can pretend to oppose them while supporting Republican immigration policy and thinking the exact same sort of things about immigrants that Trump does.

[Vik: I deleted the above as Tom Strong correctly notes that Warren was referring to contract workers, not exclusively immigrants.]

One might argue that Warren is just asking that the law be enforced. However, politics is as much about choosing which laws get enforced with what degree of rigor as it is about making laws in the first place. Indeed, with locked legislatures, deciding which groups of disfavored people get the scrutiny of the state is the president’s main power, and Warren and Sanders have been clear on whom they intend to wield it against aside from Jeff Bezos.

Informed people I respect believe that Warren is right on policy.

I really like them both, would joyfully vote for either, have already ordered my Pete t-shirt, and think no candidate can match Warren on policy. https://t.co/acAlCYKSGC

Elizabeth Warren is wrong on policy. Bernie Sanders is wrong on policy. Trade and immigration policy are foundational pillars of Trump’s administration. It would be really bad for the Democratic Party if it chooses a candidate who can’t even stomach saying Trump is wrong in these areas or even worse actually agrees with Trump’s direction and wants to double his efforts to de-globalize the economy.

For those of you searching for a better candidate, I encourage you to do your own research and please inform me of what you find in the comments. I might mention two contenders who have distinguished themselves though.

First, Kamala Harris tweeted once about Trump’s tariff’s on American consumers when I didn’t see her compatriots in the party do so:

Americans will pay the price for these tariffs — literally. https://t.co/eCFN43PKyY

The person I m offering my support to thus far, however, is Pete Buttigieg. He has been a strong and consistent supporter of free trade

Trade wars are lose-lose, pretty much by definition. Billionaires may find them "easy" to endure but their consequences fall on the backs of working Americans in communities like South Bend. https://t.co/bhDbP0t0Cq

Careless trade policy would hurt South Bend businesses that buy steel, and workers here could lose their jobs. This bluster has consequences https://t.co/BTqRANONpS

I hope the future of the Democratic party looks more like this than like a nicer, kinder rehash of Trump’s broken agenda. 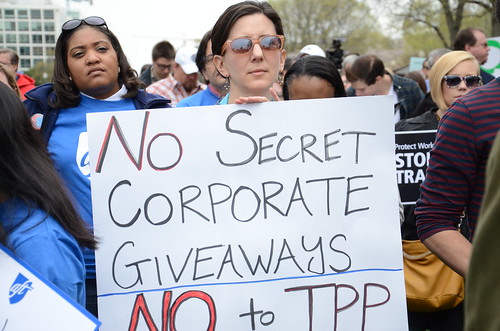