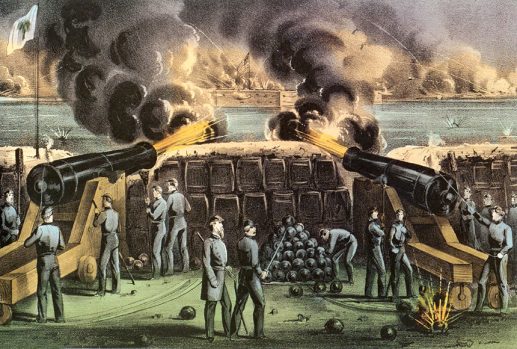 On January 26, 1979, a new television show debuted on CBS. It was a show of the concluding 70s when trucker culture reigned. That show, the Dukes of Hazzard, was a popular television show running for seven seasons from 1979 to 1985.

It was also a show that could not be made today.

The Dukes of Hazzard focused on a two cousins Bo and Luke Duke, their Uncle Jesse and cousin Daisy as they tried to outfox the corrupt county executive and sheriff. That by itself is not what would make it radioactive. What makes it a troubling show is all of the things that referred to the Confederacy. Bo and Luke drove a 1969 Dodge Charger named the General Lee after Robert E. Lee. It had a big Confederate flag on its roof. When you hit the horn, it sounded the opening notes from “Dixie.” The county executive, Boss Hogg’s full name was Jefferson Davis Hogg, after the Confederate President.

The 1980s were a decade where television looked at the Civil War in maybe a more sympathetic view of the South. It wasn’t approving of slavery, but the Confederacy was looked at more as benign. Mini-series like “The North and the South” and “The Blue and the Grey” were popular, weaving history with the drama of soap operas.

This all capped off with Ken Burn’s 1990 documentary, The Civil War. This documentary broke new ground in how they are made and it placed this four-year crisis in a way that was interesting and enlightening. Since its initial airing, critics have thought that Burns was too merciful to the South, which was personified by the historian Shelby Foote who offered a folksy view of the war. They believed Foote was too sympathetic with the South.

In my house, my mother and I loved the Dukes of Hazzard as well as the schmaltzy mini-series. I have to think there were other African Americans that weren’t bothered with a car named after a Confederate general or about how the south was portrayed.

But somewhere along the way, something changed. Thirty years ago, it seemed like the Civil War was history, history that was important, but nevertheless, it was history. African Americans were well aware that we came from slaves, but we weren’t tied to it- it didn’t define us.

Even into the 90s and early aughts, there were uses of Confederate flag that were used ironically. NuSouth clothing company used a Confederate Flag in Pan-African colors on their clothing.

All that has changed. Now we can only see the Confederacy as racist traitors. Slavery is not just the over-riding cause of the war, but the only cause. African Americans are defined by slavery and it still affects us today, 150 years later.

The Civil War is no longer history, but it is something that has been used in the culture wars for virtue signaling. It is a way to signal our progressive outlook on race, or a way to stir up racial resentment and not show we are politically correct. The Civil War has stopped being about the Civil War

There was a recent dustup when President Trump revisited his Charlottesville praise of white nationalists by invoking Robert E. Lee as a hero. That’s when Twitter blew up with people making sure they denounce Lee and call him a traitor. Trump was able to use Lee to burnish his white identity politics cred and his detractors had to show they were opposed to Trump and what he stands for like any Confederate.

Another example comes from Detroit. The annual Autorama event made news in 2017 when they got a Dodge Charger in General Lee disguise do one of the classic jumps that the General Lee did on the Dukes of Hazzard TV series. This year, they were going to feature a 70s-era Pontiac Firebird painted in the black and gold of the car from Smokey and the Bandit. The plan was to honor Burt Reynolds who was in the movie and died in 2018 by recreating a stunt from the 1977 movie. The plates had a Confederate Flag on it. That was too much for a city councilperson who wanted to cancel the jump because of their use of the Confederate Flag for two years. The Detroit City Council voted to reject the jump. Councilor Scott Benson even went as far as to say Autorama “has a history of supporting imagery and symbols of racism, oppression and white supremacy, as well as American home-bred terrorism.” Autorama continued, but without the stunt, even after the Autorama officials were willing to get rid of the Confederate license plates.

To use a tired trope, the Civil War has become weaponized, a part of our intensifying culture war. We are using history to justify ourselves today and condemn those who use symbols of the Confederacy.

There are good reasons to reassess the Civil War. The romanticism of the war, especially among those in the American South hasn’t been helpful and probably reinforced racial attitudes against African Americans. But at times it seems that people are going beyond a simple reassessment to a kind of relitigation of the war. The relitigation is basically a proxy war. Those mostly on the left, wanting to show that they are modern and believe in diversity, will highlight the Union and make sure to denounce the Confederacy. For those mostly on the right, there are those who have what was once the traditional view of the war (the brother against brother view) to those who are basically neo-Confederates.

Our changing view of the Civil War has some good things. For example, African Americans were sometimes left out of how North and South tried to deal with the past. Including African Americans is in many ways, overdue. But the downside is that it shows how we as a culture are losing empathy, the ability to look at the other as a human being and not a monster. As journalist Matthew Cooper wrote in 2015, having empathy for the enemy is not the same as condoning their cause. He wrote the following:

Shelby Foote, the author of a three-volume work on the war, is a central narrator. The grandson of a Confederate, the Mississippian even looks like a gray-uniformed officer and, as the New York critic John Leonard put it in 1990, “Everything during the war seems to have happened, that afternoon, on his porch. “Foote’s drawl and deep interest in the details of battle — Stonewall Jackson eating a peach on his horse, surrounded by corpses, saying, “God has been very kind to us this day” — made him one of the breakout celebrities of the series.

Today, I think Foote would not be so well-received. The desire to banish any praise of Confederates, even if it’s their heroism in battle, and the urge to remove all tributes to them is common now. And it’s understandable in the age of the Charleston, South Carolina, shooting, but it’s not commendable. Burns showed that there was plenty of humanity in the Southerners promoting a cause. On a much smaller scale, the German film Das Boot tells the story of Nazi sailors on a doomed submarine. Having empathy for those who fought on the wrong side of history doesn’t mean condoning the wrong side of history. Removing monuments to Confederates or no longer holding a Jefferson-Jackson Dinner, as the Iowa Democratic Party has decided to do in a fit of piety, seems more like a desire to cleanse history rather than reckon with it.

In our current context, the Civil War is black and white. There are good guys who are really good, and the bad guys are just plain evil. But the Civil War wasn’t black and white. What made Ken Burn’s documentary so extraordinary is that he was able to show the nuance of both sides. Of course, he shared what was the main cause (hint: it’s slavery), but he also showed the humanity on both sides. You didn’t have to be a neo-Confederate to appreciate the humanness of Southerners.

But today, we don’t have empathy for the Other. Liberals and conservatives can’t see each other empathically. The lack of empathy regarding the Civil War is just a proxy for how we see each other today.

I’m not longing for the Stars and Bars, but I’d like to go back to seeing the Civil War as history. I think the days that we could look at the Civil War like we did in the 80s is not coming back. Maybe that’s for the best. But there is a part of me that wonders if our current revisionism, however needed it is, is pushing us apart instead of bringing us together.