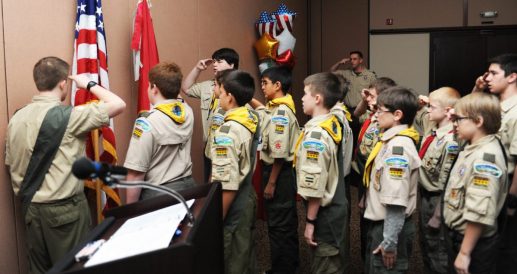 The Boy Scouts of America Troop 44 recites the Scouts’ Law at a dinner held in their honor at the Recce Point Club on Beale Air Force Base Calif., Jan. 26. Troop 44 was celebrating its 50th anniversary. (U.S. Air Force photo by Airman 1st Class Bobby Cummings/Released)

I’m a scout mom. Treasurer of Cub Scout pack 146, as a matter of fact, and proud mother of a member of the Wolf Den. It was a trade-off I made in which I agreed to be the scout parent if my husband joined the PTO, a burden which I could not abide. My son loves being a cub scout, so it’s lucky he came of scouting age after the Boy Scouts of America got their act together and changed some of their policies which would have otherwise required me to boycott the organization.

Scouting is very popular in West Virginia, which is unsurprising given the state’s tradition of outdoorsmanship. Fishing, camping, and communing with nature is a way of life here, given the forests and rivers and natural beauty with which we are blessed. It is fitting that in 2009, the BSA purchased 10,000+ acres in rural West Virginia to be the permanent home of the Boy Scout Jamboree, a national gathering held by the organization every four years. The most recent Jamboree was held in 2017- with very special guest President Donald Trump, who, after asking “who the hell wants to speak about politics?” answered his own question by doing just that for over thirty minutes.

But the organization is no stranger to politics, having found itself at the center of debate in recent years over its policy of barring gay youth and men from participating or volunteering. The policy was changed as to the children in 2014 and to adult leadership the following year. My older son joined the following fall (and then steadfastly refused to continue after one year, but that’s a different post). His younger brother is now finishing up his third year as a cub scout. Had their policy not changed, neither of my children would have been permitted to join. I have no idea at this point whether either of my sons are gay, but I was not about to risk the possibility that they may join and then, at some later date, be kicked out and banned from an activity they enjoyed. It would not have ultimately mattered for my older son, but the younger recently learned about Eagle Scouting and says that is his goal. We’ll see if that sticks, but if he doesn’t get there, it won’t be because he was ostracized for who he is.

The policy change was not welcomed by everyone. Those who continue to refuse to evolve on the issue of gay rights and those who remain stubbornly bigoted against them denounced the decision and vowed to remove their children. Some ridiculously opined that their sons would be unsafe around gay scout leaders, as though they were more prone to predatory pedophiliac behavior.

But they needn’t have worried- or at least, they needn’t have worried more. Long before BSA allowed openly gay leaders and membership, the scouting program already had a problem with child predators in its organization. This horrifying truth has seeped into the news over the years but the true, insidiously invasive nature of the problem has only recently come into focus. According to a report from NPR, BSA’s own records show that over 12,000 children reported being sexually victimized since the 1940s by nearly 8,000 different scout leaders and volunteers- and they are not done looking through their files.

As a parent, I am aware that any environment which provides easy access to children is ripe for predators. So, my other concern before enrolling my kids was how the organization has worked to address and prevent further victimization. As a parent volunteer and part of the “pack committee”, I’ve gained some reassuring insight. One of the core, non-negotiable rules is “two-deep leadership”, which requires that there be two adults present at all times during scout activities. No scout is ever to be alone with an adult who is not a parent or guardian. At least in my council, this rule is steadfast and sacrosanct. All adults who volunteer are required to take Youth Protection Training to learn this and other rules, and hold the other adults accountable. The children are also taught the rule so that they know it is a violation for an adult to get them alone. Communication between leaders and scouts outside of activities must also include a second adult, either another registered leader or the scout’s parent. The rules and their enforcement will be especially reassuring when my son ages out of the cub scout pack and joins the Troop in a few years, where parental involvement is much less.

That’s assuming, however, that the BSA is still around by then. Membership has been declining, and some packs have dissolved due to low membership and, sadly, dismal parent involvement. It is all the pack can do to get the scout’s parent to stay at the meetings with them, as required, let alone get them to volunteer to hold an office, be on the pack committee, or help out at an event. (As a parent, I admit I have been personally surprised by the parental time investment required by children’s activities in general, but still, it never occurred to me that I could drop my six-year-old son off at his den meeting and come back in an hour. )

Another reason for the decline in membership is a backlash against the organization’s recent changes; the Mormon church pulled over 500,000 kids out of the program because of its newly non-discriminatory policy against gays. (Many troops and packs are sponsored by and associated with churches who find themselves at odds with some of the changes. “A scout is reverent” remains part of the Scout Law recited at every meeting, but there is no requirement of Christian belief.)

Last year, in an attempt to boost membership, the scouts further opened its membership to allow girls to participate. The organization stopped going by “Boy Scouts of America” and simply calls itself “BSA” and recruited girls in elementary schools to join the pack. This move likewise stoked outrage and pearl-clutching and memes about pregnant girl scouts, because apparently boys and girls cannot participate in activities together without trouble brewing. But it also invoked the ire of the Girls Scouts of America, who have since filed a lawsuit over the BSA’s poaching of its members. (Perhaps the BSA’s recruitment efforts would be less successful if the Girl Scouts did more than sell cookies and learn to sew, but I digress.)

The lawsuit by the Girl Scouts is only one of several legal woes the BSA faces. They are considering bankruptcy, and their decision likely hinges on the result of numerous lawsuits over child sexual abuse, sexual harassment between employees, and one wrongful death suit based on a teen’s heat stroke death on a backpacking trip in Texas.

It is possible that scouting’s heyday is past. While no one can deny the need for changes to the BSA’s child safety policies, its admirable attempts to be more inclusive and evolve and change with the times in other ways may have been untenable to those clinging to the tradition the scouts represent. But the BSA could not have held on to that past even if it wanted to; they would just be dealing with further discrimination suits instead. They are damned if they do, damned if they didn’t. I for one, applaud their willingness to change, and we will continue to be a scouting family for as long as the program stays active-or until my son refuses to continue, which I hope doesn’t happen; “Eagle Scout” still looks good on a resume.