A Familiar Stench Wafts Up from Alabama 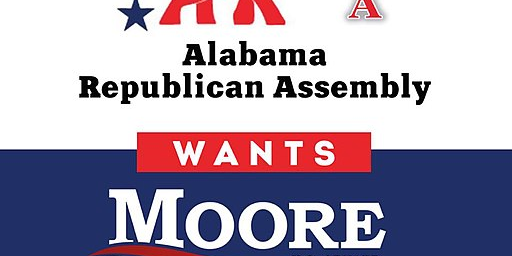 I thought we were done with this but apparently not.

Roy Moore is poised to jump into the Alabama Senate race in a bid to earn a rematch with Sen. Doug Jones, the Democrat who handed the former judge a stunning defeat in a 2017 special election.

Moore this past weekend told a gathering of grassroots Republicans that he would announce his 2020 plans in a matter of weeks. The 72-year-old perennial statewide candidate would enter the Republican primary the front-runner, according to a fresh poll.

Moore lost to Jones in deep-red Alabama amid revelations of sexual misconduct from decades ago. But the former chief justice of the state Supreme Court is champing at the bit for a do-over, believing he was treated unfairly and that voters, with the passage of time, would agree.

“The people of Alabama were hoodwinked; Jones had a free pass,” Moore confidant Dean Young told the Washington Examiner on Tuesday. “I would not be surprised if Judge Moore gets back in it.”

Moore is the one candidate that makes Republicans in Washington nervous.

Past allegations of sexual misconduct and what some regard as extreme right-wing positions limited Moore’s appeal against Jones in the December 2017 special election and could do so again. For that reason, both establishment insiders and conservative operatives are prepared to oppose Moore in the primary if he runs.

“The NRSC’s official stance is ABRM: anyone but Roy Moore,” Kevin McLaughlin, executive director of the National Republican Senatorial Committee, said in February, after Moore started making the rounds to gauge another run. “The only thing Doug Jones and I agree on is that his only prayer for electoral success in 2020 is a rematch with Roy Moore,” McLaughlin said.

Hoodwinked? Did that man say hoodwinked? Hoodw…hell, no, they weren’t hoodwinked; they had just had enough of Roy Moore. What a criminal misuse of the term hoodwinked.

Long before the 2017 primary that saw Roy Moore ride off on the horse that had brought him in a metaphor brought to life, the twice-defrocked judge was already unfit for office. He was twice removed from his position on the Alabama Supreme Court, first in 2003 and again in 2016 for breaking the law he was sworn to uphold. He was unfit for any further office based solely on either of those instances of him flouting the law for his own gain. And Moore and his supporters can couch it in whatever terms he wants, it was for the gain of Roy Moore. It wasn’t saving the Ten Commandments, it was the Ten Commandments as saved by Judge Roy Moore, righteous savior of Alabama Christianity. He wasn’t just advocating for family values, it was Judge Roy Moore Saves Political Christendom, Inc from the evil hordes. He wasn’t just for traditional marriage, he was Judge Moore vs all the gays who want to destroy you poor defenseless, politically active, and donation friendly simplefolks if not for the righteous law-breaking judge to stand up and stop them. The common thread is that Roy Moore is always chiefly concerned with Roy Moore, and if you attack Roy Moore it’s not because of Roy Moore’s many flaws but because you hate God, America, or whatever other righteous crusade is ongoing at the time.

Such heavy-handed self-righteousness is apparently good enough for some folks in Alabama and elsewhere to continue supporting the disgraced former judge. They are free to do so, but the rest of us that have a smattering of discernment have a long, thick, and disturbing book on who and what Roy Moore is, and all of it cries out for him to be kept as far from elected office as possible. To such as man as Moore, his own beliefs trump everything else, his will and desire is the paramount guide to what is right and wrong, and therefore any criticism is both unwarranted and probably downright un-American. He doesn’t have a problem with women and underaged girls; that is just Satan and money from the media. He cannot break state and federal law if he is following God’s law, but is quick to insist people who are not breaking the law are when it suits him.

And failing all that, and at attaining high office, and in conceding defeat like a man to now-Senator Doug Jones, he resorted to trying to monetize his grievances, and in doing so confirms how it really is all about him, no matter how much religion or patriotism he tries to dress himself up in.

“The liberal media, in association with some who want to destroy our Country,” he wrote, “… are doing everything they can to stop me.

“Gays, lesbians, and transgenders have joined forces with those who believe in abortion, sodomy, and destruction of all that we hold dear. Unless we stand together we will lose our Country,” he continued.

He said that “Christians can no longer afford to remain silent in these ‘perilous’ times,” taking aim at “covetous,” “unthankful,” “unholy” and “incontinent” “lovers of pleasure.”

“When I stood to bring these values and truths to Washington D. C. I was forced to fight the Washington establishment, the Republican Party, the Democrat Party, the ultra-liberal media and people such as George Soros, Barack Obama, Hillary Clinton, and many others who fear the truth,” he wrote.

And by “We” he means him. And only him. So send money.

But a country, a state, and a faith that “needs” Roy Moore is one that isn’t worth having in the first place. It’s a lascivious lie born out of the gigantic ego of a warped mind determined to wave the flag and a Bible at people and expect them to throw all logic and reason away, and thank Roy for the privilege of being saved from “those people” by happily enslaving yourself to the cause of Moore.

Christianity doesn’t need him, the people of Alabama deserved better than him, and our country certainly doesn’t need one more self-centered scandal-ridden politician with a martyr’s complex. Folks who love the flag and care about their faith, and the country that represents and protects both, should be leading the charge to keep Roy Moore right where he is — marginalized. The people have already judged Roy Moore, and found him wanting, as they should have.

Now go away, Roy Moore, with or without the horse you rode in on. Preferably without; the horse deserves better, too.