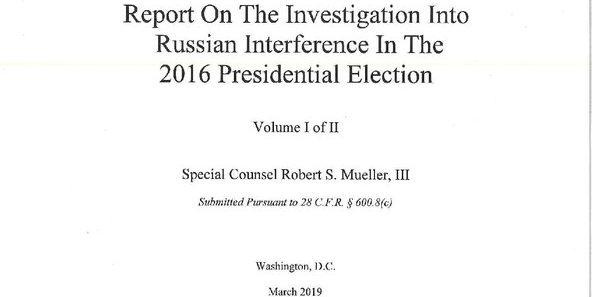 “I mean I totally underestimated the degree to which people would just get sick of 24-hour-a-day talk television and talk radio and then the degree to which this whole scandal became just sort of disgusting by sheer repetition,” the Speaker of the House muttered as impeachment talk swirled…

Actually, hold that thought for a minute. The ratings are in for the Mueller report reveal, and after two years of angst and hype they were…above average.

The release of special counsel Robert Mueller’s report on Russian election interference drove a big day for TV news — albeit not as big as coverage of some of the events connected to the investigation.

The cable news networks were all above average during their special reports, but the Mueller report’s release was not as big a TV draw as some other recent events that drew blanket coverage — including a couple that figured into the special counsel’s investigation.

Even when NBC is added in, the Mueller report coverage isn’t likely to reach those heights.

For perspective, the ratings timeline goes 19.5M viewers for James Comey two years ago, 16M two months ago, and 10M this week. Any way you want to slice it, ratings are trending down. That could mean a couple of things, but chief among them are that the public, either through having made up their mind or growing tired of the story or both, has waning interest in watching wall-to-wall coverage of it.

That quote at the top from the Speaker of the House was Newt Gingrich, right after the Republicans gave up the first losses in a midterm to an incumbent president’s party in a generation in 1998, and then embarking on the ill-fated impeachment of William Jefferson Clinton. But there is a lesson there for today. I don’t know what the number for the super hardcore politically active population in America is, but I’m betting the 10 million watching the Mueller coverage on Thursday isn’t far off. Folks for the most part have made up their mind regarding Mueller, President Trump, and all things associated with it, and those who have not made up their minds probably don’t care enough either way to worry about. The great unknown is no matter the offenses, the lies, the spin, or the screaming to save the Republic, everyone has a burnout point where they just start getting numb to it, and we are starting to see some data points on folks reaching theirs.

Following politics can be quite the bubble to be in, and ratings don’t tell the whole story, but they are useful in this case because we can get a sense of demarcation where the casual news consumer tunes in and when it’s the uber politicos who are most engaged. Clearly the latter is who was watching on Thursday, something everyone who is plotting strategy going forward should consider.