The Revolution Will be Televised on Fox News After All 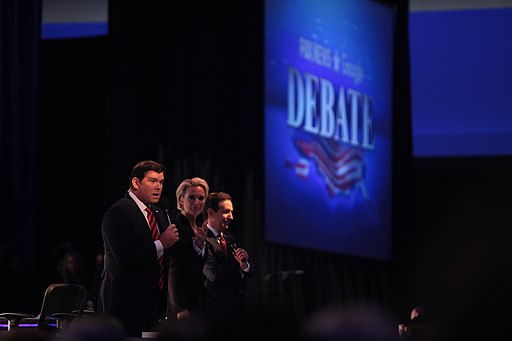 It only took one, and now more candidates are lining up to defy the DNC’s “no Fox News” policy for the 2020 presidential campaign.

The Democratic National Committee banned the network from hosting one of its sanctioned debates, citing a New Yorker report on the network’s close ties to President Trump. But the success of Sanders’ town hall event—both in terms of ratings and the headlines generated—comes as at least four other presidential campaigns consider being involved in a similar event.

Fox News announced on Wednesday afternoon that it will hold a town hall with Sen. Amy Klobuchar (D-MN) in Milwaukee on May 8, with Baier and MacCallum once again hosting.

South Bend Mayor Pete Buttigieg is in talks to participate in a Fox News town hall, a campaign aide told The Daily Beast, and he had been prior to the airing of Sanders’ event.

Meanwhile, the campaign for Rep. Eric Swalwell (D-CA)—the latest entry into the crowded Democratic contest—said “he’s willing to do a Fox town hall, and we expect to start discussions with the network soon regarding a time and place.” Discussions about doing so have not yet begun, according to the campaign but Swalwell had previously told The Daily Beast that he makes efforts to appear on the network.

Julia Krieger, communications director for Rep. Tim Ryan’s (D-OH) presidential campaign said that he is also “willing to do a town hall with Fox News,” adding that “the campaign has reached out proactively to the network to express interest in this type of forum.” She said that the network had also reached out to them.

And Jennifer Fiore, a senior adviser to Julián Castro’s campaign, told The Daily Beast that they are in conversations with the network as well.

Sanders’ townhall viewership of 2.5 million eclipsed the previous 1.9 million mark of Senator Kamala Harris on CNN earlier in the spring. Not only the ratings, but with Fox News known to be the favorite information source of one President Donald Trump, the signal boost was bound to be far greater than just the eyeballs watching live.

Thanks for watching Mr. President – we’d love to have you on a town hall soon — or even an interview on @SpecialReport —it’s been awhile. We cover all sides. https://t.co/1EDeWFhNe7

Any way you look at it, Sanders going rogue on Fox was a success, with such divergent places as The Atlantic and National Review agreeing it paid off for the current front runner among declared candidates. With a huge field that is still increasing, expect more candidates than even those listed to try and get some attention on the president’s favorite network.

In yet another questionable move by DNC chairman Tom Perez, it was announced that none of the dozen planned debates for Team Blue would be hosted on the Fox network. Despite having had discussions to do so, Perez reportedly changed his mind after some pushback from activists, citing the networks closeness with the Trump administration. But that is precisely why the Democrats should have pursued coverage of their candidates on Fox News. Perez’s continued short-sightedness was laid bare by the reception, reaction, and optics of the Sanders’ townhall. Now granted the folks in the room were friendly enough, but a candidate should be put through different circumstances as part of the primary process. The Democratic candidate that hopes to defeat President Trump is going to have to peel off some voters, and pretending they don’t exist unless they watch DNC-approved television is a bad way to go about connecting with them.

There is also more than a touch of sanctimony here. Indeed Fox News and Team Trump have deep and ongoing ties to each other, but if one is looking to root out all the incestuous connections between media and presidential administrations, there will be quite a bit of scorched earth. That isn’t even delving into recent history of Donna Brazile, while temporarily in the office Perez now holds, tipping Hillary Clinton off to debate questions while a contributor to CNN. CNN did cut ties, and somewhat interestingly she now draws appearances and a check from Fox News, but there was no discussion by the DNC that maybe CNN isn’t a neutral arbiter of primaries. MSNBC is open in their overall outlook of being supportive of progressive policies in their coverage, and their ratings and audience have responded well to it. The truth is everyone has some sort of bias, and instead of worrying about it, the DNC should be trying to get its perspective nominees in front of as many eyeballs as they can. The president and the right can and will continue to hammer media bias they think is unfair to them, including Trump’s apparent annoyance at Fox for being hospitable to Bernie Sanders, but having that narrative of “they’re out to get me” is arguably far more valuable to the president than any fair and balanced coverage would be.

The candidates themselves understand that, and thus you see the move of many of them to find some airtime on Fox. In a ridiculously overcrowded field, wading into “enemy territory” isn’t a bad way to try to stand out, and if you do well or have a moment or two that goes viral it might even help you out. If the point is to defeat Donald Trump, engaging him and getting his attention would be a boon to many of the lesser known candidates, and being on his favorite network increases the chances of that. There is a real disconnect in the logic of Perez and others who say you shouldn’t use the media platform Fox News provides because they are too close to Trump, but claim they are the folks to take on and defeat Trump in an election. People intuitively know that you cannot play just home games, and if you aren’t willing to engage Trump and Trump voters where they are, such as Fox News, it’s fair to ask if you have the stuff to take on the president and his considerable bully pulpit in the first place.

So look for more and more Democratic candidates to grace the airwaves of Fox News. Hopefully Perez does what he does best and backtracks, letting Fox have at least one of the scheduled primary debates. If nothing else, we know it would make for good television.