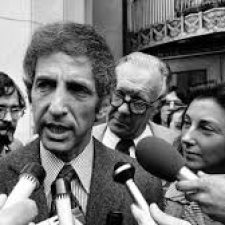 [L1]: In 1971, Daniel Ellsberg, an anti-war Department of Defense employee and former Marine, delivered copies of a “Top Secret” classified report regarding the United States’ activities in Vietnam, known as the Pentagon Papers, to the New York Times, which began publishing excerpts. Five days later, the Washington Post followed suit. Ellsberg went to the paper only after several members of Congress whom he had approached showed no interest. The incensed Department of Justice demanded the paper cease publication of the material, but the Times refused. Thus began our case of the week, New York Times v. United States, when the government sought restraining orders against the Times as well as the Washington Post. The government won in New York and was granted an order enjoining the papers from further publication of information from the report. The Court in Washington DC, however, denied the government’s request. The orders were appealed by the respective losing parties and made their way up through the courts, and were consolidated at the Supreme Court level. Oral arguments were heard roughly two weeks after the Times first story on the Pentagon Papers. The newspapers argued against the government’s use of prior restraint, a term referring to the preemptive restriction by the government of the future publication, broadcasting, or other dissemination of information.

The burden of showing that the national interest served by prior restraint is more compelling than the first amendment right to freedom of the press is a high one; a 6-3 Supreme Court ruled that the government failed to meet it. The per curiam opinion, however, was a mere three paragraphs long and devoid of any real analysis; it held, simply:

Any system of prior restraints of expression comes to this Court bearing a heavy presumption against its constitutional validity.” Bantam Books, Inc. v. Sullivan,372 U. S. 58, 372 U. S. 70 (1963); see also Near v. Minnesota,283 U. S. 697 (1931). The Government “thus carries a heavy burden of showing justification for the imposition of such a restraint.” Organization for a Better Austin v. Keefe,402 U. S. 415, 402 U. S. 419 (1971). The District Court for the Southern District of New York, in the New York Times case, and the District Court for the District of Columbia and the Court of Appeals for the District of Columbia Circuit, in the Washington Post case, held that the Government had not met that burden. We agree.

The three dissenting justices, Burger, Harlan, and Blackmun, felt that the Court rushed too quickly into its decision without enough review of the contents of the papers, and that the executive branch should have the benefit of more deference in the matter. But the 6 justices who ruled in favor of the NYT each wrote their own concurrence, and none felt the government could meet the high burden needed to employ prior restraint; Justices Black and Douglas believed prior restraint was unconstitutional in virtually all situations. As Justice White pointed out, the ruling only prohibited the prior restraint of the publication; it did not prohibit the prosecution after the fact- though no such prosecution was attempted.

Ellsberg, however, faced criminal charges for his theft and release of the Pentagon Papers. He was indicted along with an accomplice, Anthony Russo, on charges of conspiracy, espionage, and stealing government property. But as trial began,  the presiding judge learned that President Nixon’s White House sent two men to burglarize the offices of Ellsberg’s psychiatrist in hopes of finding damaging information on Ellsberg. The judge dismissed all charges against both Ellsberg and Russo because of the government’s illegal activities. The two burglars, G. Gordon Liddy and E. Howard Hunt, would go on to further infamy as part of Nixon’s so-called “plumbers” in the Watergate break-in.

This story quite obviously has some parallels to current events, with the recent arrest of Wikileaks founder Julian Assange arising from his publication of documents and video stolen by former U.S. Army intelligence analyst Chelsea Manning. There are clear differences, however. Ellsberg is more analogous to Manning than to Assange, as both were government employees who stole the information and passed it on. Manning was convicted; it is likely that Ellsberg would have been as well, were it not for the blatantly criminal actions of the government in their attempt to nail him. Assange and Wikileaks are more parallel to the role of the New York Times in this story, but it is still not in the same situation.  The argument isn’t that Assange isn’t a journalist, or that Wikileaks is not a journalistic publication; for purposes of first amendment jurisprudence, there is a strong argument that he and Wikileaks enjoy the same protections-or level of culpability-as the New York Times, regardless of the lack of bona fide press credentials. The difference is that Assange has not been sued and is not facing indictment for his publication of the information; rather, he is accused of conspiring in its theft.

The law does not clearly set forth immunity from criminal prosecution for the press and journalists who publish classified information, but prosecution of the same has been rare to non-existent (though the Bush administration did threaten to prosecute the New York Times journalist who revealed the existence of a secret warrantless wire-tapping program.) However, no such protections exist for breaking the law in order to obtain the information; it is illegal to steal it or hack a computer to access info, which is what Assange is actually accused of conspiring to do. His actions in publishing the info on Wikileaks are not the basis for his charges.

There have been many comparisons between Assange and Ellsberg in the last week, with many arguing that Ellsberg’s actions were of a more righteous nature than Assange’s, at least as far as intent and outcome. For many, that view depends on one’s politics. In the eyes of the law, at least, there are clear differences that have nothing to do with partisanship.

(H/T to Michael Siegel for suggesting the Case of the Week.)

[L2]: Attorney Gregory Craig faces indictment for allegedly lying to the Mueller investigation team about his work for the Ukrainian government in 2012. Prosecutors say Craig’s work required him to register as a foreign lobbyist for the Ukraine, which he failed to do. Craig spent a year working int he White House for President Obama in 2009, and later worked briefly on the defense team for John Edwards.

[L3]: The Trump administration has seen more court room losses than any other administration in recent history, says a report. Must be tired of winning?

[L4]: A federal judge has retired amid an ethics investigation brought on by allegations of a “dubious tax scheme” involving her brother. Judge Maryanne Trump Barry, sister of the President, announced her retirement ten days after the judicial conduct council notified her of its investigation.

[L5]: Lawyers are given wide latitude in analysis of “ineffective counsel” claims, and convicted defendants have a high bar to reach in proving that bad lawyering makes them deserving of a new trial. But an attorney sleeping through a capital murder case seems like it would meet that burden- apparently not in Texas, where a death sentence was upheld despite the admission of the snoozing lawyer involved: “I’m 72 years old,” former defense attorney John Benn later told a court. “I customarily take a short nap in the afternoon.” One imagines the condemned man’s current, more competent counsel will appeal.

[L6]: A Pennsylvania prosecutor in the hot seat for his alleged misuse of civil forfeiture funds to lease a car for himself has made his situation worse by attempting to sue the county commission, making his employees sign confidentiality agreements, and refusing to turn over public records.

[L7]: Michael Avenatti’s free-fall continues, with a new 36-count indictment from federal prosecutors in California, alleging tax evasion, perjury, and stealing from clients- including a disabled man from whom he withheld $4 million. Avenatti continues to prove that he is everything that gives lawyers a bad name.

[L8]: Last week we linked to the $200 million lawsuit against Jones Day for its allegedly gender-discriminatory workplace; the firm has responded via a lengthy statement on their website citing firm statistics and denying the charges while vowing to fight the claims “in court, not in the media.”

[L9]: A first year law student, refusing to accept his failing grade in his torts class, has sued the University of Hawaii law school. As part of his suit, he demands to see the other students’ exams in an effort to prove his was not the worst.

[L10]: How about instead of a dumb criminal of the week, we go for most fun criminal(s) of the week? This mother/son duo – and their dog – wreaked havoc at a Wisconsin Walmart in an escapade involving nudity, karate moves, and a cornmeal-shoplifting canine.

“How much is your jewelry worth?”
“It’s worth a lot of money alright”
“Like how much?”
“Like Rick Ross”

Behold as young Penelope turns an ROR into 30-days for criminal contempt: