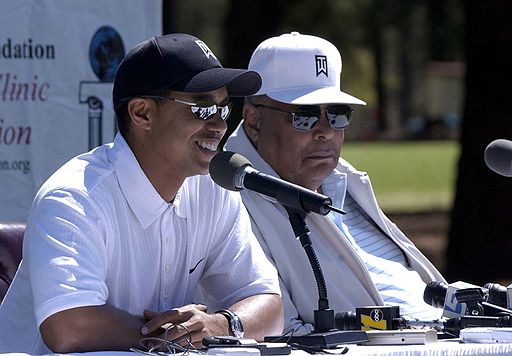 The Masters is the golf tournament that tends to transcend the sport. Like the Super Bowl does for football, or the Daytona 500 does for NASCAR, it’s larger and almost singular at its place on the cultural calendar that occasionally overlaps with the sporting one. The transcendent stars in golf, that are known to casual and even non-fans, stand out on such a stage. And without question the game of golf, the Masters itself, and sports as a whole has been somewhat the lesser in the 14 years since Tiger Woods won a green jacket. He last did it in 2005, as those watching on Sunday were reminded over and over again, as the improbable unfolded and moment by moment became reality.

The moment that will forever be etched in many people’s minds is not Tiger jubilant in victory, arms raised in his traditional red Sunday shirt, or the outburst of joy at holing out his final put. It was the moment his son ran to him, and the embrace, and the moment that reminded many of the once child prodigy Tiger hugging his own late father the first time he ruled Augusta as champion.

That was in the before time. Before the drought of winning, before the questions, before the years of personal, professional, and physical pain. Before people new the other Tiger, not just the Nike embossed marketing machine that seemed the perfect specimen of physical and mental production weekend after weekend on the gold course. The Tiger of broken relationships, tawdry dalliances, DUIs, tabloid headlines, and questions as to whether, even if he could get his head right in this most mental of sports, would his ravaged body hold up. Multiple surgeries took their toll, the rumors of his end grew louder, and comeback attempts shorted by injury after injury.

But before the last triumph in 2005, there was a more telling moment of the good times, the year before. After placing 22nd in the 2004 Masters, Woods hopped a jet and went north to Ft. Bragg, NC. He spent a week training and learning about the US Military in the same place his father had trained. Earl Woods retired a Lt. Col from the Army, having served combat tours in Vietnam and in the Special Forces. The New York Times caught a quote from Tiger during his week there, in the era when Woods was notoriously tight lipped and careful with his public image.

“It’s not that I didn’t understand what my dad did, but to physically see what he did just shed a whole new light on it,” Woods said.

That it was a watered-down version of what his father, Earl Woods, a former Green Beret, went through during two tours of duty at Fort Bragg in the Vietnam era hardly mattered to Woods. He said the experience reinforced much of what his father had taught him.

Woods would win the Masters the next year in 2005. A year after that Earl Woods would die of a heart attack a few weeks after watching Tiger finish 3 shots back at the 2006 Master. Then came the 2009 accident at his home, followed by the revelations from multiple women, his divorce from then-wife Elin, and the DUI in 2017, with a lot of pedestrian golf played in the interim. All challenges he would face without the guidance of his first teacher and closest advisor Earl Woods.

Woods and his father are inseparable in the story of Tiger becoming Tiger. The hug after winning the Masters the first time between the two quickly resurfaced Sunday, juxtaposed with the modern-day Tiger hugging his own son and then his daughter. Though it was Woods’ 15th major, for his kids it was really his first, or at least the first they had experienced in person. The world remembers the champion, but his kids had mostly seen their father as a struggling former champion chasing his own legacy more than anything. Now they saw him as the world mostly did for all those years.

That last one will be answered soon enough. We tend to be very forgiving of our sports stars, provided they still perform and entertain us. Flashes of greatness tend to cover a multitude of sins to the American sporting public. We do love redemptive stories in the third act, after the darkness of the second eclipses the high notes of the first. With Tiger Woods, we seem to be on our way to a closed circle, a complete — if not fully happy — ending.