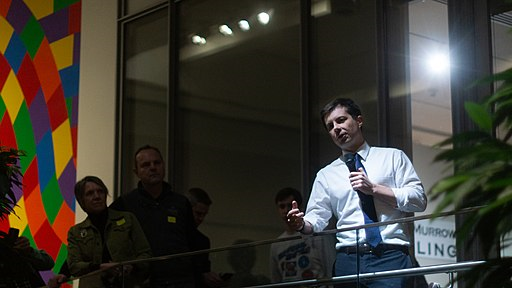 Later on this Palm/Masters/Game of Thrones Sunday, the hot new “likable” candidate Pete Buttigieg will participate in the current, and frankly rather annoying, trend of doing a “formal” campaign launch after weeks of campaigning. It’s smart strategy, similar to a cold opening where you can fine tune a bit then get the spotlight again for “opening night.” Heck, Senator Gillibrand has done it twice already, not that many people noticed. But Mayor Pete has decidedly different circumstances, coming off two weeks of mostly positive media coverage, a respectable fundraising haul for the quarter, and the unofficial media status as “next big thing.” Coinciding with his launch, New York Magazine has a in-depth profile:

Sick of old people? He looks like Alex P. Keaton. Scared of young people? He looks like Alex P. Keaton. Religious? He’s a Christian. Atheist? He’s not weird about it. Wary of Washington? He’s from flyover country. Horrified by flyover country? He has degrees from Harvard and Oxford. Make the President Read Again? He learned Norwegian to read Erlend Loe. Traditional? He’s married. Woke? He’s gay. Way behind the rest of the country on that? He’s not too gay. Worried about socialism? He’s a technocratic capitalist. Worried about technocratic capitalists? He’s got a whole theory about how our system of “democratic capitalism” has to be a whole lot more “democratic.” If you squint hard enough to not see color, some people say, you can almost see Obama the inspiring professor. Oh, and he’s the son of an immigrant, a Navy vet, speaks seven foreign languages (in addition to Norwegian, Arabic, Spanish, Maltese, Dari, French, and Italian), owns two rescue dogs, and plays the goddamn piano. He’s actually terrifying. What mother wouldn’t love this guy?

Olivia Nuzzi is a great writer, and might be coming at it a tad high and fast, but this is still tame compared to the Baal-like roll out of one Beto O’Rourke, the previous bright shiny new object in some parts of the media. His Vanity Fair launch piece involved Annie Leibovtiz working her magic to convey Joe Hagan’s prose about Beto who “seems, in this moment, like a cliff diver trying to psych himself into the jump. And after playing coy all afternoon about whether he’ll run, he finally can’t deny the pull of his own gifts.”

Whereas Beto comes off as trying really hard to be intellectually significant and deeply meaningful, Pete Buttigieg comes off as someone who has spent time really working at being smart and thoughtful. He has all the youth of a Beto without the annoying bored-rich-dude-seeking-purpose-and-destiny vibe the skateboarding, counter-climbing, punk rock former congressman gives off. Buttigieg has some talking points on his resume that make him stand out: veteran, polyglot, Harvard, Rhodes Scholarship to Oxford, pianist, and all the right consulting and campaigning gigs for various places in Democratic circles. He is also politically ambitious. He came up short seeking the Indiana Treasurer’s office, then won election and re-election as mayor of South Bend by healthy margins.

The increased coverage also brought plenty of ugly. Certain corners of the commentariat have taken to writing about and debating if the openly gay and married to his husband Buttigieg is “gay enough,” or only came out later in life for political reasons, or various other items of nasty speculation whether he’s down for the LGBTQ struggle to a sufficient degree. There are no links to those as you can find them on your own and most aren’t worth your time. That’s also a product of the “silly season” of the campaign, but should still be denounced. As should folks questioning if the Episcopalian Buttigieg is a “true Christian” or not.

The other narrative that has risen is the “feud” between Buttigieg and VP Pence, though it’s been rather one sided to this point as the vice president’s public comments have declined to say anything negative about Buttigieg personally, both men having known each other from Indiana politics. We will see how long that lasts, and there is always the looming inevitability of Pence’s current boss getting involved and escalating the rhetoric on a number of issues if Mayor Pete the upstart becomes serious challenger for the nomination Pete.

Most folks don’t care one way or the other, and those that do aren’t going to change their mind on a policy position after making that the deciding factor. It is a candidate’s persona and positions that will make the difference, and the narrative of the first always outweighs the latter. Towards the end of the NYMag piece, there is a telling quote from David Axlerod, who helped steer a relatively unknown junior senator from Illinois into the White House not too long ago.

“Elizabeth Warren is sort of running laps around people right now in terms of producing policy,” Axelrod told me. “He will have to build out some of his policy ideas. But the main thing is, how do you go from an organization that won a race in a venue that is smaller than a congressional district and scale that up to a national campaign? That’s challenging. In that regard, the early success is a mixed blessing.” He added, “Now you’re in the game and you’re drinking from a fire hose, and you have to scale up very, very quickly.”

What Axlerod is getting at here is right: Narrative only goes so far as you can sustain and project it. Warren has been releasing policy proposals nearly weekly, but her campaign is seen as stagnant at best and floundering at worse. Fair or not, her narrative has been set that she missed her time in 2016, the PR debate over her heritage and DNA testing did her no favors, and her fundraising and messaging are not breaking through. Changing that narrative will be difficult if not impossible in a crowded field, and the public and media have little patience for rehabbing candidates at the moment.

Which brings us back to the current bright shiny object in the political sky, Pete Buttigieg. The last few weeks have seen him amplified and signal boosted enough by a political media that is otherwise mostly bored with the current state of play in the primary and need a story to chew on for a few weeks. Other than folks waiting to see if Joe Biden dances to the 7th veil and gets in or is just teasing, not much is going to change in this race between now and the first debates. Talking heads need something to kick around, and Pete Buttigieg is the perfect combination of different, engaging, and intelligent to fill plenty of airtime, eating up space in Twitter and Facebook posts, and keep the horse race narrative going. There has to be an underdog to the story, whether he wins or not, and Mayor Pete checks a lot of those boxes. What he does with it is wholly up to him. Novelty wears off quickly, and if he doesn’t have a message beyond that to distinguish him from a crowded field that has a sameness of political thought problem brewing, he might find himself the underdog that was interesting while not much else was going in the campaign, but couldn’t challenge for the title in the end.