[L1]: When we think about presidential assassinations, most of us think of Kennedy and Lincoln and the attempt on Reagan. Most of us know very little about the murder of the 2nd of our 4 assassinated US presidents, James Garfield. President Garfield was standing in the lobby of the Baltimore and Potomac Railroad depot in Washington, D.C. on July 2, 1881, when one Charles Guiteau shot him in the back, near his spine. Garfield would linger more than two months before succumbing to sepsis from the bullet which remained in his body. He died in New Jersey. 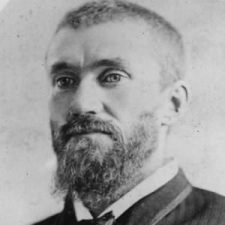 Guiteau, whose family had tried unsuccessfully to have him committed six years prior, believed himself owed a position within Garfield’s administration for having campaigned for him. He made a pest of himself around the White House until he was barred from its waiting room. Feeling slighted, he began planning the assassination, selecting an ivory handled British Bulldog revolver for his weapon because he thought it would make a nice museum display piece after his deed was done.

Guiteau went on trial in November of 1881 in our case of the week, United States v. Guiteau. He quarreled with his lawyers, insulted the court, and turned his trial into the best ticket in town.  His constant interruptions were uncontrollable and the judge gave up trying. According to one observer:

Never have I passed five hours in a theatre so filled with thrills…. From the moment Guiteau entered the trial room it was a theatrical extravaganza. He was in irons, sandwiched between two deputy sheriffs, came in shouting like a madman, and began at once railing at the judge, the jury and the audience. A very necessary rule had been established that when he interposed whatever was being said or done automatically stopped. Then when he ceased, the case went on again as if nothing had happened.”

Though Guiteau claimed to be representing himself, his actual attorney was his brother-in-law, a Mr. Scoville. The defense raised several issues throughout the trial, including an objection to the indictment itself which contained contradictory counts. For instance, one count claimed the President died “then and there” after being shot, despite being factually incorrect. Another count accurately stated his death circumstances. It is thought this was to avoid dismissal based on an issue of jurisdiction if it was argued that the murder did not take place in DC because the death occurred in New Jersey. Indeed, the defense argued that the federal Court in DC did not have jurisdiction. Further, Guiteau argued, he did not cause the death of the president; he conceded only to having shot him, but maintained that it was medical malpractice that caused Garfield’s demise. (Historians offer some support for his position; it is believed that Garfield would likely have survived his injuries with better care, and if doctors of the day hadn’t done things like root around inside the body with dirty fingers and instruments in an attempt to locate the bullet. )

Guiteau was convicted after an hour of deliberations and the following February was sentenced to death. His lawyers believed his trial was full of errors, including the jurisdictional defects and cause of death as well as an issue of certain evidence presented to prove insanity. Scoville had tried valiantly to present evidence of his client’s mental defects, calling witnesses to testify to their observations of Guiteau’s instability. Guiteau was personally affronted by this tactic, insisting that he was a perfectly sane man who was led to commit the act due to pressure from God. Notably, when Guiteau testified in his own defense, the prosecutor asked “Who bought the pistol? You or the deity?”

Guiteau’s conviction and sentence was appealed to the Supreme Court of the District of Columbia, which affirmed the lower court. This may have come as a surprise to Guiteau, who upon his conviction stated “Nothing but good has come from Garfield’s removal and that will be posterity’s idea on it…. I will go to glory. I won’t go yet. I expect to be president before I go.”

[L2]: Jones Day, the 5th largest law firm in the United States, faces a lawsuit from 6 female former employees alleging gender discrimination and harassment. The allegations set forth in a 107 page complaint paint a very unflattering picture, accusing the firm of having “a culture that is at best inhospitable to women and at worst openly misogynistic”.

[L3]: California started fingerprinting its lawyers, and found over 2000 criminal convictions, which had not been reported to the state Bar as required.

[L4]: SCOTUS has agreed to decide whether cops may pull over a vehicle if a registration check shows its owner has a revoked license, whether or not they actually know who’s driving.

[L5]: President Trump’s “bump stock ban” survived a challenge to a federal appeals court last week, and SCOTUS declined to order a stay in the matter, as it has with similar challenges. Gorsuch and Thomas would have issued the stay.

[L6]: You may have read here last week about the SCOTUS order granting a stay to a Buddhist on Texas’s death row who claimed religious discrimination, because the prison allowed only a Christian chaplain or a Muslim imam to be in the death chamber. The Court said the state must accommodate the religions of all condemned inmates equally; Texas has opted to allow no religious leaders in the room henceforth.

[L7]: Those speculating about the retirement of Justice Clarence Thomas can take a breath; he says he’s not going anywhere. Between him and RBG, it’s a morbid death race to see who lasts the longest- but the smart money is on Thomas, who’s only 70.

[L8]: A New York real estate attorney had his licenses suspended and was ordered to counseling, after advising his client’s tenant to kill himself. The attorney, Adam Leitman Bailey, has made headlines before- for coining the term “dog racism” to describe bans on specific breeds.

[L9]: You should not drive 180 miles per hour. You should not use your cell phone to take video while you drive. You definitely should not do both at the same time and put it on YouTube, like our dumb criminal of the week did.