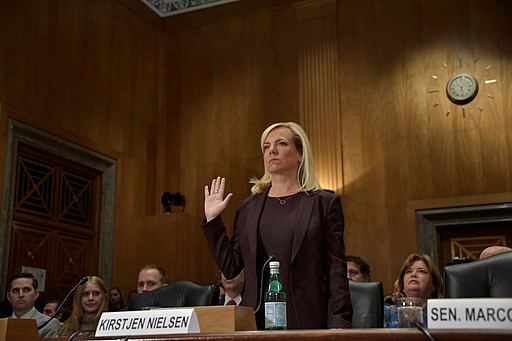 U.S. Department of Homeland Security Secretary Kirstjen Nielsen has tendered her resignation. After meeting with President Trump at the White House, the embattled Nielsen was reported to be leaving her post, later confirmed via presidential tweet.

President Trump announced Sunday that Homeland Security Secretary Kirstjen Nielsen was leaving the administration, marking the exit of a second top immigration official in a matter of days as the White House continues to grapple with an influx of migrants on the southern border.

Replacing her on an acting basis will be Kevin McAleenan, who currently serves as the commissioner of Customs and Border Protection, Trump said Sunday. The announcement on Twitter came shortly after Trump and Nielsen met at the White House, according to two senior administration officials.

“Secretary of Homeland Security Kirstjen Nielsen will be leaving her position, and I would like to thank her for her service,” Trump tweeted Sunday evening. “I am pleased to announce that Kevin McAleenan, the current U.S. Customs and Border Protection Commissioner, will become Acting Secretary for @DHSgov. I have confidence that Kevin will do a great job!”

The meeting between Trump and Nielsen was not disclosed on the president’s public schedule that was distributed by the White House, and it came three days after the White House abruptly yanked the nomination of Ronald Vitiello, who had been picked as Trump’s director of Immigration and Customs Enforcement. The president later signaled that he wants the nation to go “in a tougher direction” on immigration enforcement.

It was not immediately clear whether Nielsen resigned or if Trump fired her. One senior administration official said Nielsen “did not go to the White House with the intention of resigning.”