With Gratitude to Mrs. L., Who Taught Me I Was Somebody 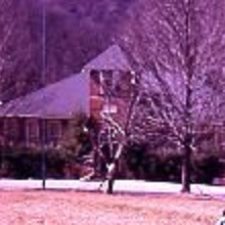 The elementary school I attended from first grade through sixth was a relic even when I was there in the late 80s/early 90s. It was, literally, a tiny red brick schoolhouse with a bell on top, with a student body whose numbers never reached triple digits. 75 students would be a high-enrollment year. There were three classrooms and three classroom teachers, with two grades each. I was an awkward, homely, shabbily-dressed and mostly neglected kid with a rough home life who struggled to make friends even at the small, close-knit school.

But I was the smart kid in class, and I learned to bribe the other kids for their friendship:

I’ll help you with your assignment if you’ll play with me at recess.

I’ll let you copy my work if you’ll sit by me on the bus today.

I’ll give you the answers if you’ll be my friend for half an hour.

My brain was all I had going for me. I fell short in all those ways that mattered socially at that time; even in my poor, rural community I had less than the others. I didn’t get my clothes where they did, didn’t have much to show off after Christmas break, didn’t have the basic social skills of my classmates.  When the three other little girls in my class all declared that it was “cold lunch” day (meaning they brought a packed lunch from home), I had to eat the school food, because I got it for free, and therefore my parents weren’t about to spend money they didn’t have on lunch foods. To be honest, there were times when I overcompensated for what I lacked by bragging about my smarts and my grades, thus winning no friends and influencing no people.

Home was a parody of Appalachian dysfunction, complete with junk cars, ramshackle house, alcoholism, and domestic violence. I didn’t get a shower every day because we had to keep the water bill down.  We didn’t have a washer and dryer so my clothes weren’t always clean. I was something less than the other kids, and I knew it.

But I was smart. And in my sixth grade year, I racked up the academic accolades. In addition to my straight As (except penmanship, which did not count toward my GPA), I went on a winning streak. I won the school spelling bee, and then the county; the same for the social studies fair. And when the annual Young Writer’s Contest came around, where I could really shine, I won all the way to the state level. I was probably making my teacher look pretty good, in hindsight.

One Monday in April my teacher, Mrs. L., came into the lunch room (which was the fifth and sixth grade classroom, the only one big enough to hold everyone) and told us that Thursday would be “purple day” and we were all to wear purple. That would not be a problem for me, as purple was (and still is) my favorite color.

Thursday morning I put on my favorite purple sweat pants and a purple t-shirt. My mom, suddenly and inexplicably concerned with my appearance, implored me to wear a purple flowered dress that was in my closet. I refused; not purple enough. So off I went in my raggedy sweats and tee.

Imagine my surprise when I walked into my classroom, and strung across the chalk board was a banner reading, in big purple letters,  “WELCOME TO EM CARPENTER DAY”. Mrs. L. had called my mom to find out my favorite color. In addition to everyone wearing purple, the school cook, Janice, who made school rolls that to this day, I cannot replicate and which have never been topped, made cupcakes with purple sprinkles. Mrs. L. gifted me a journal and a pen with purple ink. And there was a school assembly in my honor, with my parents, a woman from the county board of education, and a reporter from the local newspaper in attendance. I was on the front page of the paper the next day, above the fold. It was an amazing day for a lonely, insecure little girl Iike me. (I recall declaring, in my typically cringey fashion, that I was “so happy I could puke grapes.” Charming, no?)

I still have the newspaper, the journal, and the pen. Not a year goes by that I don’t remember what April 5th is, that time when my teacher taught me that I had value, not just to her but the outside world in general. It’s still one of the top five best days of my life, and I cannot overemphasize the impact it had on me to feel like I was SOMEBODY, even if just for those two days. It was when it first occurred to me that I had the ability to do something more with my life than my childhood would suggest.

Mrs. L. was the best teacher I’ve ever had, and not just because she doted on me that day. She was the type of teacher who threw out an entire year’s worth of lesson plans in history and social studies and instead spent that time teaching us about every person and event mentioned in Billy Joel’s “We Didn’t Start the Fire”. She’s the type who, when she learned I was skipping the awards ceremony for the state winners of the Young Writers contest because my parents didn’t have a car reliable enough to make the two hour trip, drove us all down in her Lincoln. 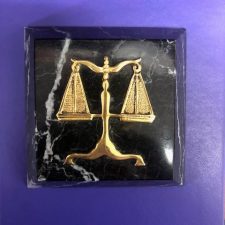 Gift from Mrs. L. upon my graduation from law school.

The little school closed a few years after I finished my time there. Someone recently bought it and converted it into a home. Mrs. L. became Dr. L., assistant provost of a local college, and recently retired. We stay in touch; this morning, I sent her a message wishing her a Happy Em Carpenter Day; she, of course, remembers. I’ve let her know every milestone along the way, sending her announcements of my high school, college, and law school graduations. Not to brag or solicit gifts, but just to let her know that her efforts contributed to the success of a kid against whom the odds were stacked. She probably doesn’t know just how much of that I owe to her.

Good teachers are more important than even their staunchest allies know- and they are hard to come by, especially these days when their freedom to teach creatively is stymied by mandatory curriculum and standardized testing. The Billy Joel lessons could never occur now.  Dedicating an entire day to the celebration of one student would likely result in complaints of unfairness or favoritism. And it’s a shame, because the type of individual attention the teachers in my tiny school could give to their students and the tailoring of lessons to their learning styles is vastly preferable to the one-size-fits-all approach we seem to have today. I hope that there are still good teachers who find a way to reach their students on an individual level.

To kids from good families, with loving, attentive parents, a good teacher may be just one more adult in their lives. To a kid who feels alone and worthless in the world, they may be the only thing standing between them and disaster.