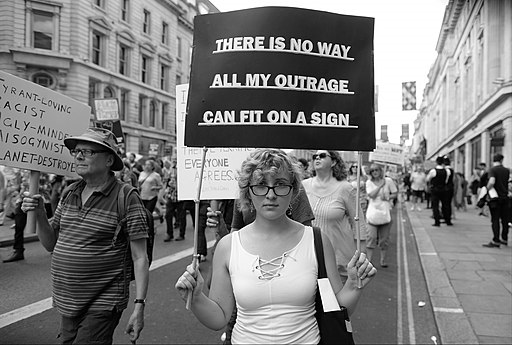 [LF1] Are You ‘Virtue Signaling’? Probably: “What our findings show is that asking whether outrage is “pure” is the wrong question. Even authentic outrage is influenced by implicit strategic calculations. This shouldn’t come as a surprise to anyone familiar with evolutionary theories that hypothesize that morality arose precisely as a way of signaling one’s trustworthiness in cooperative endeavors.”

[LF2] Baltimore deserves better than a one-star mayor: “People are justifiably outraged about what’s happening in Baltimore and that anger is spilling out everywhere. On social media. On city streets. And yes, even on an Amazon page that is hard to find because “Healthy” is missing a “y,” leaving the title to read “Health Holly” above a picture of the book and a bio of Pugh.”

[LF3] ‘So Disheartening’: At Colleges Embroiled in Scandal, a Sense of Outrage and Sadness: “Many of the universities, though, have moved swiftly to fire coaches implicated in the scheme. Parents have made first appearances in court. And companies have distanced themselves from executives accused of paying William Singer, a college admissions consultant, to use bribes and deceit to raise their children’s test scores or get them admitted to their chosen schools through athletic recruiting spots, despite the fact that they were not competitive athletes.”

[LF4] Trump says “Special Olympics will be funded” amid outrage over budget cuts proposed by Betsy DeVos: ““I heard about it this morning,” he said. “I have overridden my people. We’re funding the Special Olympics.” Trump’s announcement came after Education Secretary Betsy DeVos spent days defending the proposal , which drew widespread condemnation from lawmakers as well as advocates and celebrities. The president’s sudden reversal reflected a political desire to move away from a plan that was not expected to pass Congress but also underscored Trump’s comfort with undercutting top officials.”

[LF5] Algeria’s President finally resigned. Will that be enough to quell protests?: “Bouteflika’s resignation on Tuesday was a huge turnabout for the sickly 82-year-old leader, who had initially planned on running for a fifth term in elections slated for April. The prospect had triggered weeks of demonstrations by hundreds of thousands of dissatisfied Algerians. Meanwhile, the presidential vote has also been shelved.”

[LF6] Amid the cycles of outrage, a strategy emerges: Just ride it out.: “It may be easier than ever to outlast the winds of outrage because the winds blow from so many directions and shift constantly. In a feature titled “The Year of Outrage,” Slate magazine documented 365 incidents, one for every day of the year, that incited widespread revulsion or protest on social media. Some of the controversies were trivial (“August 19: A New York Post writer says catcalls are flattering and she loves them”), although many were of widespread public interest. The point was, there was always something.”

[LF7] Facebook’s Crisis Management Algorithm Runs on Outrage: “It’s been almost exactly a year since news broke that Facebook had allowed the personal data of tens of millions of users to be shared with Cambridge Analytica, a consulting company affiliated with Donald Trump’s 2016 presidential campaign. That revelation sparked an investigation by the U.S. Justice Department into the company’s data-sharing practices, which has broadened to include a grand jury. Privacy breaches are hardly as serious as ethnic violence, but the ordeal did mark a palpable shift in public awareness about Facebook’s immense influence.”

[LF8] Only 40% of adults believe student climate protests will make a difference: “While three out of five Irish adults were found to support children and young people in their call to action, researchers found only 41 per cent expected the demonstrations would be “fairly” or “very” effective while more than a third expected the strikes would be “ineffective”.”

[LF9] French authority rejects pre-emptive ‘yellow vest’ protest bans: “France’s Constitutional Council on Thursday struck down a measure that would have let authorities ban certain individuals from protesting, a key element of the government’s plan to crack down on violence at “yellow vest” demonstrations. The council, which rules on the validity of laws, said the proposal gave officials “excessive latitude” to justify the individual bans against people suspected of being “a particularly serious threat to law and order.”

[LF10] Trump: Smollett case ‘outrageous,’ FBI and Justice Department to review: “Prosecutors infuriated Chicago’s police chief and mayor this week when they abruptly dropped 16 felony counts against the “Empire” actor that were related to making a false police report. Prosecutors offered little explanation and sealed the case — yet still insisted the actor faked a racist, anti-gay attack on himself in January.”

[LF11] Philippines protests hundreds of Chinese ships around disputed island: “As many as 275 Chinese ships and boats have been spotted this year around Thitu island, also known as Pag-asa island in the Philippines, said Jason Ramon, chief of public affairs for the Philippine military’s western command, to CNN Philippines. Armed forces spokesperson Edgard Arevalo cautioned that it was difficult to quantify how many ships are around the island at any one time, as Chinese vessels “come and go” from the area. “The information that we got is the more likely intention is to establish their presence in the area,” he told CNN Philippines on Monday.”

[LF12] City councillor says it’s time to debate protest buffer zone for schools: “In a notice of motion going to council Monday, Farrell points to related provincial legislation passed last spring to create safe-access zones around Alberta’s abortion clinics. Similar safe-access laws also exist in B.C., Newfoundland and Labrador, Quebec and Ontario. Expanding the concept of protest buffer zones to include schools has also been raised by the Alberta Party candidate for the area, Angela Kokott, who originally shared video of the Queen Elizabeth school protests on Twitter. And prior to the election being called, former health minister Sarah Hoffman said an NDP government would amend legislation to prevent similar protests around K-12 schools.”

[LF13] US halts F-35 equipment to Turkey in protest of its missile purchase from Russia: “”Pending an unequivocal Turkish decision to forgo delivery of the S-400, deliveries and activities associated with the stand-up of Turkey’s F-35 operational capability have been suspended,” Air Force Lieutenant Colonel Mike Andrews, a Defense Department spokesman, said in a statement. Turkish President Tayyip Erdogan has refused to back down from Ankara’s planned purchase of a Russian S-400 missile defense system that the United States has said would compromise the security of F-35 aircraft.”

[LF14] Cleveland Indians Opening Day Protests: 526 Years (and Counting) of Dignity and Resistance: “The annual Native American protests at yesterday’s home opener for the Cleveland “Indians” MLB team were quiet, if otherwise typical. Most typical being the constant sneering and shouting at the protesters by the (mostly Caucasian) fans of the team who were upset that anyone would question their right to make a mascot out of a largely exterminated race of people. “You already won! Chief Wahoo is gone! Why are you still out here complaining?”

[LF15] Hamas violently suppresses Gaza economic protests: “Hamas appears to have forcibly suppressed a rare uptick in public dissent in Gaza, beating and arresting scores of people over the past week who have been demonstrating against price rises and dire living conditions across the strip. A group of activists and civil society figures calling itself “We want to live” had planned a general strike on Thursday, but after attacks by riot police since last week it was not clear whether the strike would go ahead.”

[LF16] Mum’s plea for girls to ditch leggings sparks protests: “”I was ashamed for the young women at Mass,” Ms White wrote. “I thought of all the other men around and behind us who couldn’t help but see their behinds.” “Think of the mothers of sons the next time you go shopping and consider choosing jeans instead,” she suggested to the female students of the University of Notre Dame. The letter sparked an immediate backlash from students, who argued that their choice of clothing should not be policed and women should be free to wear what they want.”

[LF17] ‘All I hear is anger and frustration’: how Brexit is affecting our mental health Brexit: “Feeling low and anxious? Suffering from disrupted sleep? Could Brexit be damaging your mental health? A Britain Thinks poll of more than 2,000 people, the results of which were released this week, found that 83% of those surveyed were sick of hearing about Brexit, while 64% thought it was damaging their mental health. The poll found that the dominant words people use in relation to Brexit have changed: in 2017, it was “confusing” or “uncertain”; now, it is “broken” and “chaos”. No politician is singled out, because we’re blaming all of them equally; except for David Cameron, who has a special, individuated space in the nation’s psyche as the man who unleashed this hell. Wishing for the politics of a lost age is the last thing people do when they have given up: it isn’t an acceptance of the status quo, but rather frustration at not being able to put these hideous worms back in their can.”