And Just Like That, Billy Ray Cyrus is Cool Again 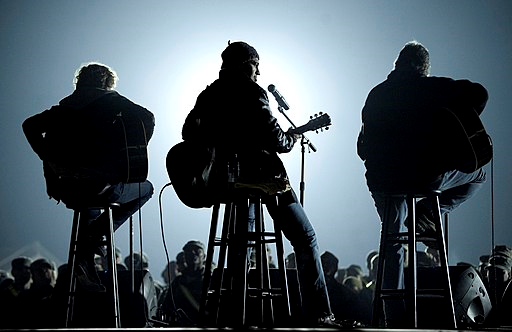 “If you wait by the river long enough,” the old Chinese proverb goes, “eventually the bodies of your enemies will float by.”

Wonder what the proverb for living long enough for Billy Ray Cyrus to be cool again is?

I was my daughter’s age when “Achy Breaky Heart” was the biggest thing going, inspiring line dancing, pop-accessible country, and an appreciation for a Hall of Fame-level mullet.

I was the same age a few months later when the craze died down, and the burn-out level on the Achy Breaky craze reached scorched Earth status.

Like sands through the hourglass, time moved on and so did Billy Ray. Most notable in the years from then till now is Cyrus being one half of the parties responsible for Miley Cyrus, and is known to the younger generation from his role as Robby Stewart on another pop culture success, Hannah Montana, during the mid-to-late 00’s.

More than once, Cyrus poked fun at his biggest hit on the show, and has done several winks and nods to it over the years. He also continued his own, if much lower key, music career of recording and touring. A whole generation of kids grew up with Robby Stewart, model father, the way other kids had Danny Tanner, Carl Winslow, or Jason Seaver around the time Achy Breaky was doing it’s thing.

Meanwhile, the world changed again. Whereas Billy Ray rode the music video medium to stardom, and his daughter the Disney express to fame, Montero Lamar Hill took the newest method of social media content creation to stardom. Known professionally as Lil Nas X, he spun a popular Nikki Minaj fan account into his own music career. It worked, and his track “Old Town Road” has become a viral sensation. All was well…until Billboard decided to intervene:

Billboard subsequently removed “Old Town Road” from the country chart, suggesting “it does not embrace enough elements of today’s country music.” While Cyrus did not directly address the genre credentials of “Old Town Road,” he showed his support for the song last week in an Instagram post to his 1.4 million followers. “Don’t try and think inside the box,” Cyrus wrote. “Don’t think outside the box. Think like there is no box. #HorsesInTheBack” — a reference to a lyric from “Old Town Road” that subsequently became a popular meme.

“Old Town Road” is at Number 15 on the latest Hot 100. The track continues to stream this week — it’s currently the only song on Spotify’s Top 5 in the U.S. not by Billie Eilish. It’s also gaining support from pop radio: 39 new stations added the song this week, according to Nielsen BDS.

Cyrus did one better than just support the crossover hit on social media. Last night, the remix of the song, featuring Billy Ray Cyrus, hit the interwebs.

Some will debate if that finally makes it “country” enough. But who cares. What a fun story. From a guy who has had high highs and low lows of a career to make something fun, and a good tune, in the most modern of formats with a decidedly new-school star, this is the stuff that needs to be appreciated. It’s hardly the first genre mashing. Ludacris performed onstage at the CMT awards in 2011, Nelly and Tim McGraw collaborated before that, and there are other examples including the aforementioned Florida Georgia Line and Nelly again.

And country purists have no room to talk anyway. Those are the people who once insisted that the “outlaw” movement would ruin the genre but now worship at the auditory altar of Waylon, Willie, and the boys. Long before metalheads found it cool to wear black and sing about murder and death, Johnny Cash had already been there and done that. Hank Williams wrote some of the definitive country songs and one of the most beloved gospel songs of all time. And speaking of Willie, he went from button down song writer for Patsy Cline and others to legendary status both for music and being the only person to make Snoop Dogg hit the time out button smoking. Now there are some who think modern country is too pop/rock/rap/whatever else they don’t like.

You really want to argue that lyrically, Billy waxing poetic about diamond rings and Maseratis on Rodeo Drive isn’t musically acceptable considering where he’s come from as an artist? I lived through Achy Breaky; this is much, much better.

The beauty of the streaming age is kids, unlike we who had our music dictated by what you could get on the radio or at the store, can instantly access anything. And with apps and programs, making and mashing together songs and genres has never been easier.

But more importantly, the 38-year-old me got to roll up to the middle school and drop my kid off with a song featuring Billy Ray Cyrus playing a bit too loud, and not only did I not get beat up for it like would have happened were it 1992, but she thought it was cool. I know because she downloaded it to her playlist immediately, thanked me for telling her about it, and immediately ran up to a friend to share it with her. What fun. Plus, no line dancing this time. Life is good.