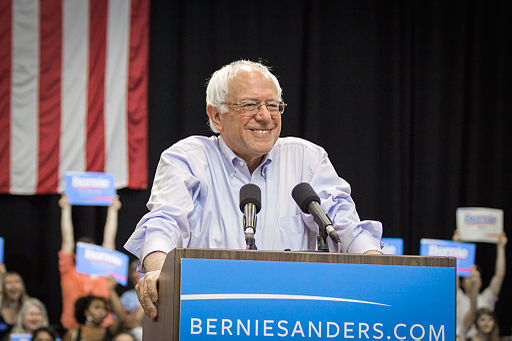 The title, or marking, of the “front-runner” in a presidential race is one of the time-honored traditions in electoral politics. It sets the narrative of the race, it gives all the other candidates their target to shoot for, and shoot at for that matter, and brings a hierarchy to the proceedings.

And like it or not, the front-runner for the Democratic 2020 nomination as it stands right now, today, in the year of our Lord 2019, is Bernie Sanders.

I know, I know, polls show Joe Biden leading. But he isn’t running if he is smart, and if he does he will be quickly buzzsawed down to a nub the way he has been the previous two times he ran. And that was before he had women coming out of the woodwork to comment on his propensity to get handsy on video.

No, the leader right now is Sanders, and the quarterly fundraising haul shows it isn’t just the poll numbers he is leading in.

Senator Bernie Sanders of Vermont raised $18.2 million over the first six weeks of his presidential bid, his campaign announced Tuesday, a display of financial strength that cements his status as one of the top fund-raisers in the sprawling Democratic field.

Mr. Shakir said that a majority of Mr. Sanders’s donors were under the age of 39, and that 20 percent of all donors had not contributed to Mr. Sanders’s previous campaigns. He said that 88 percent of the total money raised came from donors giving $200 or less.

Add to that number the estimated $14M he carried over from the previous campaign and the Independent Senator is leading the Democratic field by a fair distance.

Senator Kamala Harris of California raised $12 million in the first quarter, her campaign said on Monday. Pete Buttigieg, the mayor of South Bend, Ind., said on Monday that he had raised more than $7 million. Both candidates entered the race in January, several weeks before Mr. Sanders announced his candidacy.

Andrew Yang, a New York businessman who is running on a platform that the United States should provide a universal basic income, said Tuesday that he had raised more than $1.7 million from over 80,000 donors — noteworthy figures for a political newcomer. His average donation was $17.92, he said, an amount even smaller than Mr. Sanders’s.

Former Representative Beto O’Rourke of Texas, who entered the race in March and has been a prolific online fund-raiser, has yet to announce his haul for the quarter.

Senator Harris is benefiting from the quasi-official Democratic donor “bundlers” list, and has slowly but steadily been fundraising well, even if her poll numbers have not changed much. Conversely, her senate colleague Elizabeth Warren is fighting off whispers of disappointing fundraising, which weren’t helped with the announcement that her fundraising director is quitting. Her own quarterly numbers are being withheld with a note many took to be a tamping down of expectations. The fundraising for the rest is important because of the new DNC rules that a candidate must have 1% polling and 65,000 people in at least 20 different states donating to make the cut for the stage. Pete Buttigieg’s impressive $7M quarter has him the long-shot flavor of the moment and has increased his media attention.

But short some other dynamic changing the race, and it probably will, the field is pretty static. Minus Biden, it would stand to reason Kamala Harris would be in the best position to get the establishment party power players support, though the more progressive voices have already been sniping at the Senator from her left. Maybe Beto standing on things endears him to the party apparatus and he gets the mantle. The shuffling of the other dozen plus candidates will make for plenty of content, and speculation as to who has funding to make it to the June/July debates, but the fundamental question of this primary is still pretty simple: Can the Democratic Party as currently constituted stop Bernie Sanders from getting the nomination? And once you answer that question, the follow-up is at what cost to the Democratic Party?

While it was interesting to watch who fell on which side of the latest debate over Joe Biden, if you listened closely and paid attention the defense told you much more about the race than about the former VP. If you made a drinking game of plugged in Democrats using the term “not disqualifying” you would have been in the hospital by supper time. Mika Brzezinski on Morning Joe, didn’t bother with the terminology of the day:

You could spend plenty of time dissecting everything that is assumed in order to make such a statement, but the hint is clear: beating Trump is paramount, and a certain segment of the Democratic Party would rather ride with ‘electability’ and known quantity Joe Biden than deal with round two of the Sanders supporters. Make no mistake, the wounds of 2016 are still there, and anyone who thinks Bernie campaigning for Hillary Clinton was going to close the wound hasn’t been paying attention to folks, HRC among them, who openly blame Sanders as a factor in that defeat. The Sanders folks learned their lesson well; they have been on offense, picking a fight with Beto O’Rourke the second his failed senate race was over, and are now denying they are behind the resurfacing stories of Joe Biden being too touchy feely with women. Regardless, Bernie Sanders and his supporters feel their time is now, they are owed for the DNC thumbing the scales against them in 2016, and they are playing for keeps.

Increasingly, it looks like minus the thumb on the 2020 scales, Sanders might get the job done this time. How he would do in a general election against President Trump is anyone’s guess. How his supporters will react to anything short of the nomination is established. Will the Democratic establishment risk schism to interfere if he does look to be winning? Can a Kamala Harris, or Beto, or Pete, or any of the others have a moment and rise to the occasion?