When I quit vaping, one of my concerns was that I would start gaining weight. So I coincided that with a plan to eat well. The plan was rather basic: I would count my calories, come up with some targets, and take it from there. I know calorie counting is among the more crude measurements, but trying to take a holistic approach creates some compliance problems and a regimen is only as strong as its compliance rates. Anyway, long story short I didn’t even need to set targets because merely cataloging what I was eating got me to eat less. All of which is to say that I have become a calorie counter and that is helpful because it makes me think a lot more about what I eat and what corners I might be able to cut.

Thank goodness for calorie-counts on menus and packaging. Yay regulations! One of the discoveries (well, re-discoveries) is how calorie-rich my fancy coffee is. Not that I was having it every day, but when you’re counting calories and you’re having to account for a whopping 550 for coffee it has you looking to get creative. What I’ve found is that I can have two cups of a reasonable facsimile of my fancy coffee every day for about 100 calories total.

All I needed was combining different types of sweetener (instead of relying on just one), and most importantly a little bit of sugar.

You see, I had been trying to do it without any sugar. Sugar free syrup, artificial sweetener, and so on. The problem is that to get it up to the ideal sweetness threshold, I would have to put so much sweetener in there that it passed the tastes-acidic threshold that sweetener reaches when you over-rely on it. But while sweetener couldn’t do it on its own, it would boost the taste of real sugar far in excess to its calorie count. It’s taken me about three months to nail the formula down exactly (for optimal taste and calorie count), but I finally succeeded.

Whether coffee or soft drinks or desserts, store sweets usually come in two varieties: sugared and sugar-free. This is unfortunate, and has had me living a very sub-optimal coffee experience. The makers of such thing need to do a better job of trying to mix these things. 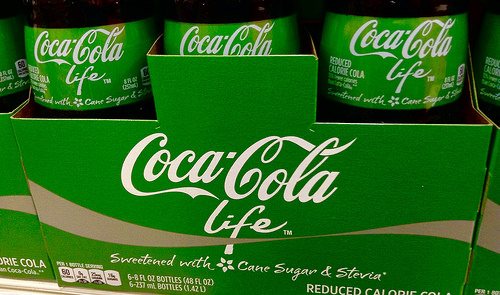 Soft drink makers have been playing around with it. A long time back Coca-Cola came out with Coca-Cola C2, which failed in pretty quick fashion but was, at least from a taste standpoint, a worthy effort. More recently they have released Coca-Cola Life, which had a longer run but was just discontinued. Pepsi, meanwhile, is making Pepsi True and has been releasing various Mountain Dew variants that mix sweeteners to come out to 100 calories. So, progress is being made, but I’d really like to see more.

My experience with the 100 calories stuff is that it ultimately doesn’t quite work. It’s diet enough to be noticeably diet but has enough calories that diet drinkers would be inclined to avoid it. Maybe they, as with me and my coffee, just need to spend more time tinkering with the formula. They might be able to get regular soft drinkers on board. Given how lousy Diet Mountain Dew tastes, it’s possible that they just can’t go any lower the way that Dr Pepper has. Dr Pepper Ten has ten calories and isn’t going to be attractive to regular Dr Pepper drinkers, but is a noticeable improvement compared over Diet Dr Pepper, which is already one of the best diet drinks (as a diet-to-regular taste ratio) around and even that small amount of sugar appears to make a difference.

Alternatively, it’s possible that no such market for this will exist. That regular soft drinkers will always be able to taste any artificial sweetener, and that diet drinkers won’t want to budge. My guess is we’ll see more movement with the latter group since their aversion is less likely to be sugar itself and more likely to be a lighter drink (which Dr Pepper ten very much is) and low calorie (ten is pretty close to zero, in this context).

The only thing likely to help with the latter effort is regulation of the sort we’re starting to see in the UK where they are really putting pressure on producers to limit the amount of sugar in their products. If they are pushed hard enough to do so, they will start trying to compensate by balancing sweeteners. This would be good for people like me, though for reasons both ideological (regulations boo!) and practical, I hope that’s not the route this goes. Whenever I talk about this there are people that step forward to say that they like the all-or-none because they have a reaction to the artificial sweeteners. If the market accommodates me there will probably always be full-sugar products. Regulations, on the other hand, are blunt instruments.

In Britain, their taxes and regulations actually prevent (or at least discourage) the sort of mixing I advocate. If you’re selling soft drinks in Britain, taxes start getting applied at 5 grams and once you reach eight grams you might as well have fifty. Pepsi Ten drinkers are off the hook, but Mountain Dew Ice drinkers pay full freight. So they avoid the problem I mention above where they are encouraged to put artificial sweeteners in everything, but ultimately encourage sweetener separation.

Soft drinks tend to be what we think of when we think of sugar products, but of course there is room for other things too. My 550-calorie coffee, for example, has lesser-calorie variants but they reduce the calories mostly by other means (lower-fat milk, fewer sweet ingredients, and size) and not very much by mixing and matching. Here’s hoping that changes… without the regulatory cudgel.