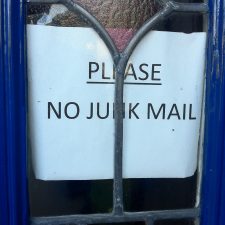 [L1]: Remember that time on Seinfeld when Kramer decided to opt out of mail, sparking a feud with the very sinister Postmaster General, Wilfred Brimley? Turns out, Kramer was within his rights- partially. According to Rowan v. United States Post Office Department, our case of the week, a person may opt out of unsolicited advertisements- i.e., junk mail.

The case stems from a 1967 federal law that was intended to stop unsolicited offers of pornographic material from being sent to unwitting recipients, and possibly into the hands of children. The law provided that a person could notify the postmaster that he or she had received advertisements for “erotically arousing or sexually provocative” matter and wished not to in the future. The postmaster could then issue an order requiring the sender of such materials to remove that recipient from its mailing lists and cease any further mailings to the offended person. A group of publishers, mailing list brokers, distributors and others whose business was affected by the law filed suit, alleging violation of free speech and due process.

The case was instituted in the US District Court for the Central District of California and heard by a panel of three judges. The judges agreed the statute was constitutional as to any mail which fit the description of erotic or provocative, but limited their holding to materials of that nature. The plaintiffs appealed. In a unanimous opinion written by Justice Burger, the Supreme Court not only upheld the decision of the District Court, but affirmed a broader interpretation of the statute. The Court found that the postmaster’s order would apply to any further mailings of whatever kind by a particular sender, once a person notified the post office of their objection to mailings from that party. As to the First Amendment issue, the Court believed a person’s right to be unbothered in his or her home trumped the right of an advertiser:

Weighing the highly important right to communicate, but without trying to determine where it fits into constitutional imperatives, against the very basic right to be free from sights, sounds, and tangible matter we do not want, it seems to us that a mailer’s right to communicate must stop at the mailbox of an unreceptive addressee.

The Court further opined that, because the mailer has the opportunity to be heard once the postmaster has issued the order prohibiting future mailings, a violation of the order triggers rights to an administrative hearing before any sanction is issued and therefore there was no violation of due process.

In a concurrence written separately, Justice Brennan expressed concern that the decision of the head of household to request an order prohibiting mail from an entity could likewise result in preventing other, of age individuals living at that address to receive mail he or she may want. He found that a potential “constitutional difficulty”, but agreed with the Court’s affirmation of the law nevertheless.

At present, one may still contact the post office to request that a particular advertiser cease correspondence, but since it would be a full time job to keep up with all of the senders, tossing unwanted mail in the recycle bin or garbage is probably more efficient.

[L2]: Lee Boyd Malvo was 17 years old when he and another man terrorized the DC/NoVa area with sniper shootings. While his adult male accomplice, John Muhammad, has been executed, Malvo is serving consecutive life terms. SCOTUS has agreed to review a decision of the 4th Circuit Court of Appeal that ruled Malvo should have a new sentencing hearing.

[L3]: Justice Clarence Thomas made headlines last week- because he spoke during oral arguments. Thomas asked questions in the jury selection discrimination case of Curtis Flowers, mentioned here last week. It is the first time Thomas has asked questions since 2016.

[L4]: Go ahead and give that cop the finger. The 6th Circuit confirms it’s ok. However, if you do it to a cop who just moments before let you off easy, you’re still kind of a jerk.

[L5]: In a decision with major 5th Amendment implications, the Massachusetts Supreme Judicial Court ordered that a prosecutor can force a criminal defendant to provide the passcode to unlock his phone, if the prosecutor (thinks) he or she knows what’s in it.

[L6]: Immigration courts say they are struggling to provide interpreters to migrants who appear before them, some of whom speak relatively obscure languages.

[L7]: A law firm accused of helping cult leader Warren Jeffs control, abuse and extort his followers may be sued, per 10th Circuit Court of Appeals. The Court found the firm had a fiduciary duty to the members of Jeff’s polygamist sect.

[L8]: Keep your disease-prone children at home, anti-vaxxers, says a school in suburban Rockland County, New York. And a federal judge agrees, denying a motion by their parents to force the school to let their kids back in. Rockland County, incidentally, had 147 cases of measles reported in an outbreak last fall.

[L9]: A 16 year old girl in Texas is already a college grad- and is about to start law school. And here I am, nearing (LET’S SAY NEARING, OK?) middle age, thinking about how when I was 16 my greatest accomplishment was winning a writing contest in 6th grade.

[L10]: Two men who say cops stole some $225,000 during a raid on their business had their lawsuit tossed by the Ninth Circuit. The Court said qualified immunity protected the officers from suit, because the men have no clearly established right to be free from theft by cops executing a search warrant.