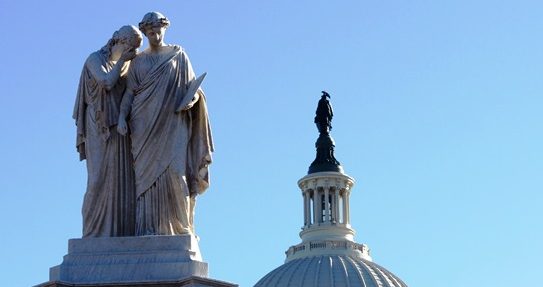 As he promised, Sen. Majority Leader Mitch McConnell brought the Green New Deal up for a vote in the Senate. No one voted for it, with 57 against and 43 voting “present” out of protest.

The nonbinding resolution, which calls on the United States to make an ambitious effort to slash its use of fossil fuels to fight climate change, fell short in a procedural vote. The Senate did not proceed to debating the measure, as 57 senators voted against it and 43 Democrats and independents who caucus with them — nearly all of the
Democratic caucus — voted “present.” Four senators who vote with Democrats — Joe Manchin of West Virginia, Kyrsten Sinema of Arizona, Doug Jones and Alabama and independent Angus King of Maine — voted against the resolution.

By voting “present,” Democrats hoped not to go on the record on a bill that had no realistic chance of passing, even if they support the concept of a Green New Deal. The six Democratic senators running for president next year — who co-sponsored the original resolution introduced by Sen. Ed Markey, D-Mass. — did not take a position on the measure Tuesday.

Republicans have gleefully criticized the Green New Deal, warning about Democratic efforts to take away anything from cars to hamburgers. They accuse Democrats of a drift toward socialism spurred in part by freshman Rep. Alexandria Ocasio-Cortez, D-N.Y., a champion of the measure in the House.

“Republicans want to force this political stunt to distract from the fact that they neither have a plan nor a sense of urgency to deal with the threat of climate change. With this exercise, the Republican majority has made a mockery of the legislative process,” said Sen. Minority Leader Chuck Shumer (D-NY)

“This is nonsense, and if you’re going to sign on to nonsense, you ought to have to vote for nonsense,” said Sen. McConnell.

Well there is something we can all agree on this. This was nonsense. All the way around.