And Then They Came For the Memes 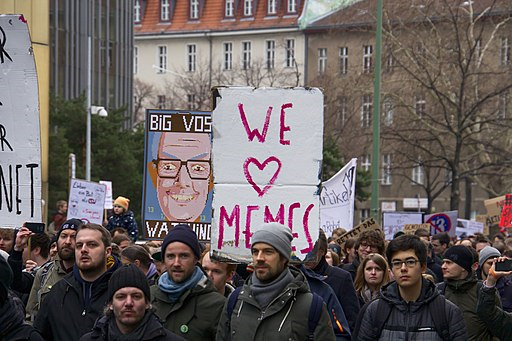 Those that have argued that online content providers should be regulated are about to get some real world data on what that might look like. The European Union has passed the highly controversial “Article 13” which makes content providers legally liable for unlicensed user-uploaded copyrighted material.

At its core, the overarching Directive on Copyright in the Digital Single Market is an attempt by the European Union to rein in the power of big technology companies. Article 13 will make platforms legally responsible for all the copyright content they host.

The proposals put copyright holders up against major technology firms and protesters concerned that the legislation would limit freedom of speech. The onus to stop copyrighted content from being uploaded to sites such as YouTube is a sharp departure from existing legislation governing how online platforms operate.

Critics of Article 13 have argued that there’s only one way platforms could do this: upload filters. These automatically check all uploaded content to see whether it’s copyrighted or not. If the filter detects copyrighted content – it doesn’t make it onto the platform.

But concerns have been raised about how that will work in practice.

It’s the idea of automatic upload filters that have free speech and open web advocates up in arms, and in some cases like in Germany over the weekend, in the streets protesting.

The far bigger headache is Article 13, dubbed the “upload filter” by critics. It says that platforms “storing and giving access to large amounts of works and other subject-matter uploaded by their users” are liable for copyright infringement committed by users. (Meaning they can be sued by rights holders.) So, platforms and copyright holders must “cooperate in good faith” to stop this infringement from happening in the first place.

The difficulty, again, is working out what this provision actually means and how it might be enforced.

Critics are clear: it means upload filters, forcing sites like YouTube and Facebook to scan every piece of content users share, and checking it against a database of copyrighted material. Such a mechanism would be ripe for abuse by copyright trolls and would make millions of mistakes. The technology simply doesn’t exist to scan the internet’s content in this way.

This specter of an upload filter has been framed by critics as the EU trying to “kill your memes.” Proponents of the bill say this isn’t the case, and that previous laws make parodies and memes exempt from copyright claims.

That same article goes on to bring up the long-simmering idea that the world wide web is in danger of “balkanization of the internet”, as different regions enact different regulations. The idea that tech giants could just start geoblocking whole regions due to laws is a real possibility, as is governments firewalling their markets such as China is doing. Nothing stays the same, and the internet is going to be no different. The shape of that, however, is very much in the balance.