Meanwhile, Back at the Brexit 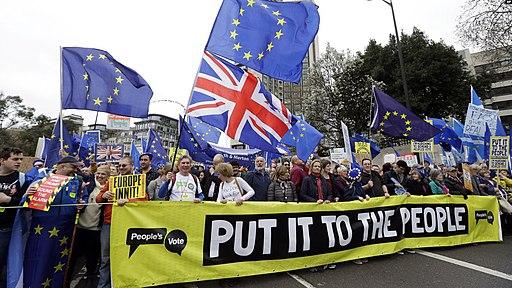 Our UK friends have seen some developments in the increasingly chaotic Brexit saga over the last few days. Let’s discuss them.

[BX1] Cabinet coup to ditch Theresa May for emergency PM: “Theresa May was at the mercy of a full-blown cabinet coup last night as senior ministers moved to oust the prime minister and replace her with her deputy, David Lidington. In a frantic series of private telephone calls, senior ministers agreed the prime minister must announce she is standing down, warning that she has become a toxic and “erratic” figure whose judgment has “gone haywire”. As up to 1m people marched on the streets of London against Brexit yesterday, May’s fate was being decided elsewhere. The Sunday Times spoke to 11 cabinet ministers who confirmed that they wanted the prime minister to make way for someone else.”

[BX2] Corbyn’s team split over soft Brexit : “Jeremy Corbyn’s shadow cabinet is set to clash again over Brexit this week, with supporters of a second referendum concerned that the Labour leadership will opt to facilitate a soft Brexit. With senior Labour figures openly calling for another public vote at the anti-Brexit march in London on Saturday, other influential MPs believe Corbyn’s inner circle is actually warming to a Norway-style Brexit that would see Britain leave the EU, but remain closely aligned to it.”

[BX3] The failing coup against Theresa May could bring down the government: “Because what it shows is the underlying split in the cabinet between those ministers – Gauke, Clark, Rudd, Mundell – who want to stop a no-deal Brexit at any cost, and those who want to prevent either a referendum or a “soft” Brexit “in name only” – Leadsom, Mordaunt, Fox, Grayling – has become irreconcilable. For a brief moment at the end of last week ministers on the more Remain side in particular thought replacing May would paper over this yawning gap on the most important decision this country has faced since we joined the EU in 1973 – but it can’t and won’t.”

[BX4] One telling image: in a Brussels corridor, the EU takes back control of Brexit: “They came from the Netherlands, Spain, Germany, Ireland, Latvia, France. Among them were the bloc’s deputy Brexit negotiator, the chief Europe advisers to Angela Merkel and Emmanuel Macron, the deputy secretary general of the European commission, the ambassadors from Dublin and The Hague. There was, of course, no Brit. After two years of increasingly frustrating Brexit talks with a hopelessly divided government incapable of explaining what – in the realm of the real – it actually even wanted, Europe had had enough. “It’s like dealing with a failed state,” one official confided before the summit.”

[BX5] Brexit march: Million joined Brexit protest, organisers say: “Organisers of the “Put It To The People” campaign say more than a million people joined the march before rallying in front of Parliament. Protesters carrying EU flags and placards called for any Brexit deal be put to another public vote.”

[BX6] Europe cannot remain a ‘prisoner’ to Brexit delays, Macron says: “French President Emmanuel Macron said Friday that Europe must not remain hostage to the ongoing Brexit process as British Prime Minister Theresa May struggles to persuade a deeply divided parliament to back her Brexit deal after the EU granted her more time. “The European project must not remain a prisoner to Brexit,” Macron told reporters on Friday. Macron also called for unity within Europe that the block has had a needed wake-up call on China, saying, “China plays our divisions.”

[BX7] Brexit and the Irish Border: “Twenty years of peace in the aftermath of the Good Friday Agreement cannot mask the continued commitment of the Irish to the ultimate reunification of Ireland, here in America as well as there. There are no good options for the British Parliament as it wrestles with what to do about the open border between the two Irelands after Brexit. Either the border remains open, as majorities in both Irelands want, which would mean that Northern Ireland remains in the European Union as the rest of Britain secedes. Or a hard border is reinstated, threatening economic livelihoods on both sides and potentially reigniting the Troubles.”

[BX8] Can U.K.’s Labour Party Survive Brexit?: “Labour had far exceeded modest expectations in a 2017 snap general election, and Mr. Corbyn had emerged as a surprisingly appealing figure, with young people memorably chanting his name at a music festival. He was seemingly primed to capitalize on the Conservatives’ infighting and missteps over the exit negotiations. Instead, he is now openly at war with his own members of Parliament, nine of whom have defected in the space of two weeks. And the party is bleeding both Remain and Leave voters, while facing serious accusations of institutional anti-Semitism. There is talk of an existential threat.”