The Unbearable Lightness of Biden 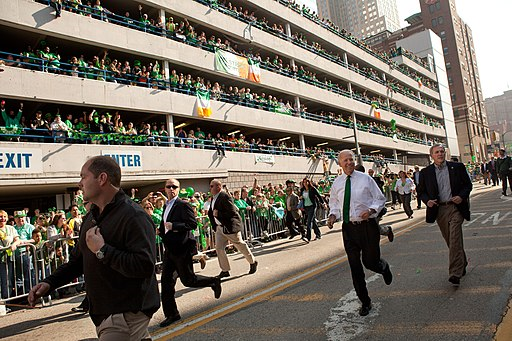 For being as popular as he is at the moment, it is amazing that people have forgotten about Joe Biden. Not Joe Biden the ideal candidate, who is uber popular as many await with bated breath whether or not the former vice president will enter the 2020 race to unseat President Trump. That Joe Biden has never done better, been more loved, or been thought of more highly. If only Saintly Ol’ Joe would deign to descend from Retirement Olympus and save all the land.

But to praise that Joe Biden is to forget Joe Biden, the actual person.

The Joe Biden who fell to 5th after uttering this immortal line of deep thought about his soon to-be running mate, and the explanation of which brought to light his long series of gaffes:

The Joe Biden whose first campaign in 1988 was derailed by plagiarism charges.

The Joe Biden whose campaign was fined by the FEC $219K for spending violations during that curtailed 2008 effort.

The Joe Biden whose propensity to get handsy with people has been a boon to meme generators and is sure to be a boom to content creators everywhere, should he declare, and be fun for supporters to explain away in the #metoo era.

The Joe Biden who in 45+ years of public service has been in the proximity of important things, always appears in the pictures of important events, but who, when viewed historically, really did not have much effect at all.

You get the idea. Joe as the fun crazy uncle gets such things chuckled away. Joe Biden, serious candidate, has twice been DOA in national electoral politics for the same reasons.

“But the poll numbers,” exclaim those to whom a Biden 3.0 campaign seems like a good idea. Fair enough, let us consider that for a moment, using 538’s take on it:

To be clear, I don’t think you should be going solely or necessarily even mostly by the polls at this stage of the primary. There are lots of other quantitative and qualitative ways to evaluate the candidates; we think a multifaceted approach is best. There’s still a lot to be said for tracking measures of insider support such as endorsements, for instance, which despite having been a useless indicator in the 2016 Republican primary still have a strong track record overall. Those insider metrics are middling for both Sanders and Biden. In Sanders’s case, he’s off to a much better start in endorsements than four years ago, but is nonetheless behind Harris, Booker and Amy Klobuchar. It’s harder to evaluate Biden because he hasn’t entered the race yet; he does have some endorsements, but the sheer number of candidates running suggests that he doesn’t have the field-clearing power that Clinton did in 2016.

But at the very least, the polls aren’t reason to be dismissive of Sanders and Biden. If you think of a mental scale that spans the categories “bad,” “meh,” “pretty good,” “good” and “great,” Biden’s polling qualifies as good even if you do count for name recognition, and Sanders’s as pretty good (inching toward good in the most recent polls).

That line about field-clearing is something to stick a mental asterisk beside.

To review, Bernie Sander’s supporters, and other progressives for that matter, are very much driven by the idea that 2016 was robbed from them by the Democratic establishment and powers-that-be who put their finger on the scale for Hillary Rodham Clinton. They have plenty of evidence to support their claim, although the presumption that Sanders would have won without it is still debatable. The irony that such interference was, in theory, paying HRC back for shoving her aside in 2008 in favor of the Obama/Biden ticket should also be savored and appreciated.

But now comes the latest example that the folks backing/supporting a 3rd Biden campaign for the White House are woefully tone deaf on the 2020 election. On Thursday, Axios ran this item about Joe Biden and his potential campaign having met, at their request, with Stacey Abrams last week:

Close advisers to former Vice President Joe Biden are debating the idea of packaging his presidential campaign announcement with a pledge to choose Stacey Abrams as his vice president.

Now, with all due respect to the venerable Mike Allen, there is no such thing as a leak; just information people want to get out for a reason. This was clearly a trial balloon released into the commentariat ether to gauge the reaction. While many respected people think this is a great idea and smart strategy, historically speaking, it is not.

Nearly every campaign cycle someone floats this “package” idea of President and VP. It’s not the worst idea in the world, and has been tried before. Ronald Reagan did it… in his failed campaign in ’76. Cruz did it more recently, and it was rightly seen as the desperation move it was. The idea of a package, and adding a one-term pledge with it, is doubly questionable, as the message is “vote for this candidate that is immediately a lame duck and whose VP will spend half that time running themselves.” Every event, every news story, every crisis will have a double narrative of what will the president do, and what will the wanna-be president say about it. It is the antithesis of leadership to purposefully create such a situation.

And it would be with Joe Biden as well. Many would rightly see the addition of Stacey Abrams not as a positive, but Biden trying to use a young rising progressive star as an inoculation shot against “old white guy” criticisms. Besides, Abrams might as well run for president herself, and then worry about VP opportunities. After all, she has won as many senate races as Beto O’Rourke has, and enjoys plenty of support from the base after her competitive Georgia campaign for governor. She already nabbed a prime spotlight gig doing a State of the Union response, and earning bipartisan praise, if not for content then for keeping it short and too the point compared to the Margret Mitchell approach the president took in time allotted.

Such a union would not only be ill-advised but brand killing for Abrams. Unlike previous campaigns, when his primary opponents couched their criticisms of Joe since the old rules of “same team” were still at least tacitly in place, no such restraint will be shown this time. Whereas Barack Obama was careful to cover for Joe Biden after the “clean” controversy, the progressive wing of the party is not going to do that this time around. Biden 2020 will be supported by many of the folks who championed Hillary Clinton, but there will be no field-clearing and all 20-odd candidates will direct fire on the front-runner, who will be perceived to be Biden should he enter. Why would Abrams want to be the shield for all that when she could do so for herself in her own campaign, or with a candidate more fitting her political ideology and brand?

It feels like some in the Democratic party would rather take a run at known quantity Joe Biden, or more specifically the highly-idealized concept version of Joe Biden currently being presented, than deal with the very hard questions a progressive wing that is rapidly growing both in influence and volume is demanding be addressed.

If you want to make a bet that those voices can be placated into supporting Joe Biden were he to somehow conquer those folks’ preferred progressive candidates, you will surely be making a bet that did not work out well for Hillary Clinton.

If you place a bet that it doesn’t matter who the nominee against Donald Trump is in 2020, victory is assured and the primary fight sore feelings will not bleed over into the general election, you may be right, but that is quite a gamble.

If you want to wager that – in what will be hours of footage per day for the next 10 moths until voting starts – we can go without a major Joe Biden gaffe or controversy, you are betting against time, tide, and 70+ plus years of recorded history on the man.

The real man, as he exists.

But feel free to take a chance on Joe Biden the dream.