Blessed Be The Sun Devils 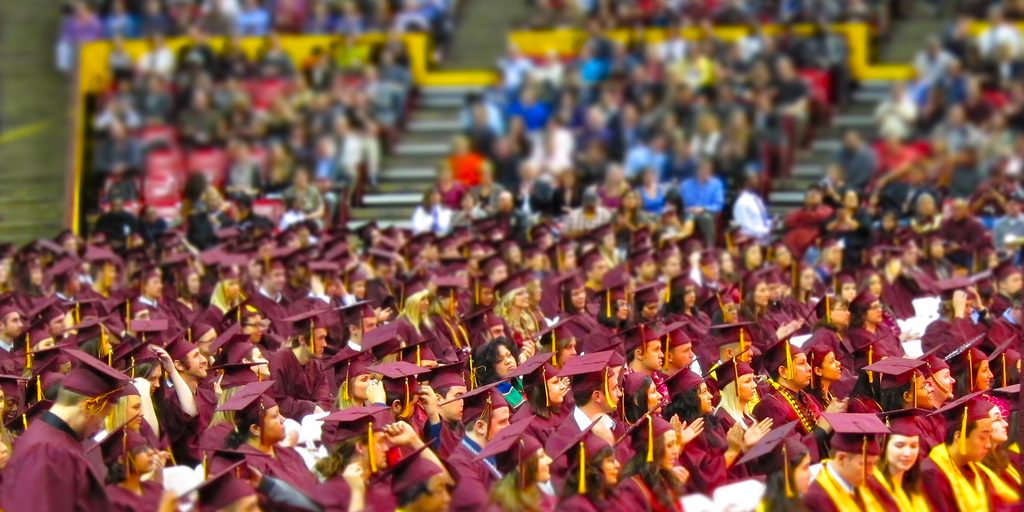 Elizabeth Picciuto has a piece in Arc Digital on the cheating scandal:

Loughlin and Giannulli spent $500,000 to fake their daughters’ recruitment for participation in crew. The girls were not, in fact, athletes. Recruited athletes, however, are subject to lower admissions standards. So their daughters were admitted to USC despite their sub-par achievements.

Giannulli, in particular, encapsulated the selfishness and small stakes of this big money plot. He described the fate for his children he had spent half a million dollars to avoid, writing in an email that he wanted to “make sure we have a roadmap for success as it relates to [our daughter] and getting her into a school other than ASU!”

Why would a parent spend so much to avoid their child’s attendance at Arizona State University?

It’s a further stroke of amazing luck to go to ASU specifically. If we are going to take college rankings seriously at all, as these wealthy parents obviously do, there are more than 2,000 four-year colleges in the United States and US News & World Report ranks ASU 115th among national universities. And even better for parents of children about to start college, ASU is ranked 11th for undergraduate teaching (above USC!).

It’s more about expansive privilege than Arizona State specifically. Private schools in general can often really offer things public schools can’t, but USC in particular is a private school that operates more similarly to a public university in many ways. It has nearly 20,000 undergrads, which is unusual for a private school. Compare that to Wake Forest, which was also implicated, which has just over 5,000. The size of the student body can make a lot of difference when it comes to class sizes and the attention that individual students get. Some private schools are difficult to fail out of because the school will intervene well before you do. Arizona State, on the other hand, barely knows you exist. I was surprised to see the University of Texas at Austin implicated, because flunking people out is a part of their model; if you’re grossly unqualified, they not only aren’t going to hold your hand, but they want you to leave to make room for a transfer student more likely to succeed.

I don’t know where USC falls on this axis, bigger than the intimate private schools but nonetheless private and considerably smaller than Arizona State or Texas.

Irony of ironies, the criteria of Olivia Jade (Laughlin’s daughter) was tailgating and parties. No matter what you might think of Arizona State, you can get those there. But she’s also a social media “influencer” and something of a celebrity, and that genuinely is more difficult to accomplish in Tempe than LA. And even for less celebrity-driven cases, the connections you make at USC are less likely to be replicated at Arizona State.

There are some things that these schools can offer that even good state schools never will. Much of this is specifically built on exclusivity. Elizabeth writes:

The same is not quite true for elite universities. One could argue that absolutely everyone deserves an elite education, and I’d be sympathetic to that. But as things stand, where there are not enough elite educations to go around, there are some elite university students who very clearly deserve to attend their schools. They are intellectually curious, diligent, driven.

The eliteness is, of course, built on the very notion that not everybody can have it. If everybody could get a USC education, the wealthy would just find some place else. One of the kickers here is that USC isn’t even what one would consider top-tier to begin with. Much of the early response was “Wait, they did this for USC?” (As opposed to Stanford.)

This is likely to be a bump on the road to an increasing stratification of higher education. As more and more people go, we will need to differentiate in other ways. All of our Supreme Court justices went to Harvard or Yale, which wasn’t true a century ago. As the national population grows and those schools don’t, they are going to need nice landing places for those who are excluded due to an inferior transcript or just an overflow of candidates. Private schools that can scale up like USC, NYU, and others, will continue to fill that void. Most won’t go to the illegal lengths that these parents did, but they will find a way.

It has benefited immensely not only from Arizona’s rapidly growing population, but overflow from California. If you, like Olivia Jade, want to do the tailgating thing, the two biggest California options are difficult for even good students to get into. Arizona State, though, is right there. You see the same thing around Texas where the University of Texas at Austin and Texas A&M are not easy to get into, and beneficiaries include the University of Arkansas and Oklahoma State, both of which advertise in Texas. With the ever-increasing emphasis on college sports, and the increasing stratification of athletics programs, big state universities are getting bigger and Arizona State is as good an exemplar of that as any, even if the prospect makes Olivia Jade’s parents freak out.

Arizona State and similar universities are in a good spot. Especially as the big universities in the biggest states become more selective, private schools become less affordable, and mid-tier schools struggle to keep up. Most parents don’t have the resources to avoid it, and most don’t especially want to. But there will always be those that do. Those that view the accessibility of schools like Arizona State as a sort of indictment. For rich, status-invested parents whose children are not academically stellar, the Ivy Leagues are constricted by the need to take only the top flight students (and maybe the very occasional David Hogg) and they are not growing with the population.  These parents’ kids are going to have to go somewhere. The coaches and cheatsters saw market and went for it. The market will only continue to grow.

Apart from the University of Texas and Yale, one of the bigger surprises was a lot of the schools they were angling for were not considered premier. But as Arizona State benefits from spillover from California, so too will the University of San Diego from Stanford. They will be able to offer the air of exclisivity and eliteness and not being Arizona State.