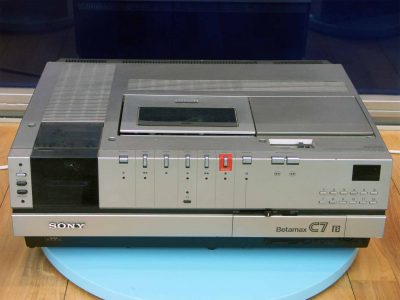 [L1]: The turn of the century was the golden age of music piracy, when every college student with a computer and a modem was happily downloading virtually any song they wanted for free on a peer-to-peer file sharing network called Napster. Napster facilitated the searching of a particular song across all its users, who reveled in their abandon, often amassing hundreds or thousands of tracks on their PCs. That is, until the record companies got wise, and Napster wound up sued for copyright infringement in federal court- and lost. But the Napster case was not the beginning of at-home media “piracy”, as we see in Sony Corps. of America v. Universal City Studios, Inc., our case of the week.

In 1984, VCRs were still near-future technology, but its predecessor had been around for a few years: the Betamax Video Tape Recorder (VTR) by Sony. With Betamax, owners could record television shows onto beta tapes in the convenience of their own homes.  The ability to watch one’s favorite program at one’s leisure- and skip commercials- was revolutionary. This displeased Universal, who owned the copyright on several television programs. Their response was to team up with Disney to file a lawsuit against Sony for facilitating copyright infringement by supplying the means by which the public could record their programming. The plaintiffs lost at trial in District Court, but the 9th Circuit reversed and held Sony liable for contributory infringement. Sony appealed to the Supreme Court.

The Supreme Court discussed the practice of “time shifting”, the phrase used to describe recording a program in order to watch it at a more convenient time. The Court did not find this to be of any damage to the copyright owners because it would actually served to enlarge their audience. (Napster would invoke a similar argument for the practice of “ripping” songs off of purchased CDs and making digital copies, calling it “space shifting”.) The 5-4 Court, ultimately finding that the recording was fair use and ruling against the copyright infringement claims, came to several conclusions that are really rather quaint in hindsight. For instance, the plaintiffs argued that the ability to skip commercials would impact them negatively, but the court questioned whether viewers would bother with the onerous process of fast forwarding. And it was noted that the likelihood of consumers amassing a library of recordings, another fear of the plaintiffs’, was small due to the relatively high cost of Betamax tapes.

The dissenting justices in the case disagreed that copyrights were not infringed by home recording under the relevant statutory framework. Furthermore, they disagreed that home recordings were an example of “fair use” because they understood fair use to be a use that benefits the public in some way, not simple the user. And the dissenters balked at the majority’s belief that the potential damage to the copyright holder was insignificant; they did not so readily discount that consumers would skip commercials or build libraries, a rather prescient concern.

Napster, whose case wound up no further than the 9th Circuit, would find no cover from the Betamax decision, however; the Court found that it had actual knowledge of the copyright infringement by its users, and that this infringement was commercial use, because it allowed people “to get for free something which they would ordinarily have to buy”, unlike the recording of broadcasts from public airways.

[L2]: And now the Supreme Court is being asked to consider another question for the digital music age: once you purchase a song digitally, is it yours to resell?

[L3]: Now that many states have legalized marijuana to some extent, dispensaries are finding it difficult to do business, thanks to federal banking laws. Will congress finally address the conflict?

[L4]: This Texas judge burst into the jury room to stop jury deliberations and announce the defendant was innocent- because God told him so. Citing medication-induced delirium, the judge reported himself to the state.

[L5]: DNA is a marvel of modern forensics, but what about identical twins? Can science differentiate which of them left their DNA behind at a crime scene?

[L6]: Police have been using drones for a while; now, they’ve equipped them with infrared cameras to assist in locating missing -or fleeing- people. But, fortunately for our Fourth Amendment rights, they won’t be used for warrantless surveillance; infrared searching still constitutes an illegal search without a warrant under the Kyllo decision.

[L7]: I and millions of others were riveted a few years ago by the Serial podcast detailing the case of Adnan Syed, convicted for killing his 16 year old girlfriend as a teenager. The series sparked a movement for his freedom and resulted in the overturning of his conviction by a Maryland intermediate appeals court. But the state’s high court has reinstated it, setting the stage for a petition for certiorari at the SCOTUS.

[L9]: Crazy law of the week: You may not alter the weather without notifying the US government.

[L10]: Our dumb criminal of the week is the latest celebrity to give his lawyer a migraine with incessant media comments, R. Kelly. Note to Kelly: admitting to having purchased teen girls from their parents does not help your case. You’ve probably seen the clips of his conversation with Gayle King, so I’ll leave you with the SNL version: