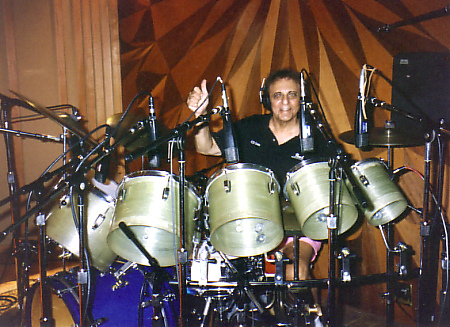 When the distinctive drum intro to The Ronettes’ “Be My Baby” comes on, produced by Phil Spector and the now famous (infamous to the people who survived it) “Wall of Sound” production, you should know it as one of the most famous drum riffs ever. And it may have been an accident by a drummer who prided himself in mastering his instrument.

Well, I keep saying I’m not positive about that. It’s a very strange thing. It was unintentional. It’s possible that I was playing it straight 2 and 4, and at one point, maybe when we started rolling, on the first or second take I may have accidentally missed that second beat, so I played it on four. And I continued to do that. Phil might have said, “Do that again.” Somebody loved it, in any event. It’s just one of those things that sometimes happens. Now, if you listen to Frank Sinatra’s “Strangers In The Night,” you’ll hear that I used that very same beat, just slower. That time it was intentional.

If that is the wrong generation for you, you might know the song better from this:

Be My Baby - The Ronettes - Dirty Dancing

However it happened, the three kicks of the bass drum and bang of the snare that is so recognizable on that track and thousands of others was the work of Hal Blaine, who died Monday at the age of 90.

If you don’t know much about him, you might know the influence he had as a member of the legendary “Wrecking Crew” of session players behind a staggering amount of music.

You know the Wrecking Crew, even if you don’t think you do. The loosely affiliated assembly of musicians, which included the session drummer extraordinaire Hal Blaine (who coined the name), the bassist and guitarist Carol Kaye (one of the few female session players of her era), the guitarist Tommy Tedesco, and dozens of other musicians (at various times, Earl Palmer, Barney Kessel, Plas Johnson, Al Casey, Glen Campbell, James Burton, Leon Russell, Larry Knechtel, and Jack Nitzsche), dominated American popular music in the nineteen-sixties, first as the group of choice for Phil Spector and his Wall of Sound, and then as the physical embodiment of the lavish sonic dreams of Brian Wilson.

Rarely credited on record, the Wrecking Crew nevertheless played for, with, and in the service of nearly every prominent American pop performer of the decade, to the point that it’s probably easier to make a list of the acts it didn’t support. If you’ve heard the Crystals (“He’s a Rebel”), Jan and Dean (“Surf City”), Paul Revere and the Raiders (“Kicks”), Simon and Garfunkel (“Bridge Over Troubled Water”), the Association (“Windy”), the Mamas and the Papas (“California Dreamin’ ”), Frank Sinatra (“Strangers in the Night”), the Monkees (“Last Train to Clarksville”), Herb Alpert (“A Taste of Honey”), Nancy Sinatra (“These Boots Are Made For Walkin’ ”), or Sonny and Cher (“Bang Bang”)—not to mention the “Batman” theme, the “Mission: Impossible” theme, the “Hawaii Five-O” theme, or the “Born Free” theme—then you’ve heard the Wrecking Crew. When producers called musicians, these were the musicians who got called first.

The numbers alone are amazing. Forty #1 hits had Hal Blaine keeping time on them. More than 35,000 recorded tracks over the years. The Rock and Roll Hall of Famer is credited as playing on more hit records of the rock era than any other drummer.

If you want to make an occupation of being a drummer – as opposed to just being on the stage shaking your head and getting chicks – if you want to get into movies, TV, records, studios, you’ve got to know what you are doing right from the start. You don’t walk in and learn it.

Influence is a hard thing to measure, the very definition of the word being subjective to how folks perceive things. Especially so in music, where everything is bits and pieces of something else, patchworked together into a sonic quilt. Musicians like Hal Blaine demand to be included as influencers. Almost all musicians start learning by playing along to the songs they hear, and the generation that learned mimicking the music of the 60s could not have avoided Hal Blaine and the other members of the Wrecking Crew if they tried, even if they did not know their names.

Sound and music is funny like that. As I sat at my desk working on this, my daughter walked through the house and pulled her earphones out from listening to streaming music on her phone, to ask me a question. It’s a technological jump that the musicians of the 60’s probably find remarkable, that kids today can pull up any song they want, anytime they want it.

“What are you listening too?” she asked.

I ran down the list of songs, but the blank stare told me I should take a different tack. “You know the opening to Dirty Dancing, that song over the opening credits…”

It wasn’t even out of my mouth before the teenage girl turned to move away and put her earphones back in, her head starting to bob, her shoulders started to move, and her mouth produced that “Boom – Boom, Boom – Bang” intro of “Be My Baby” as she danced her way back the way she came, humming along to a song that was popular when her grandparents were her age. I thought how many people over how many years have had those little moments of mindless joy from something so simple as Hal Blaine missing the count on his drum kit, but going with it to produce an iconic sound.

That’s influence, and a legacy worth celebrating.